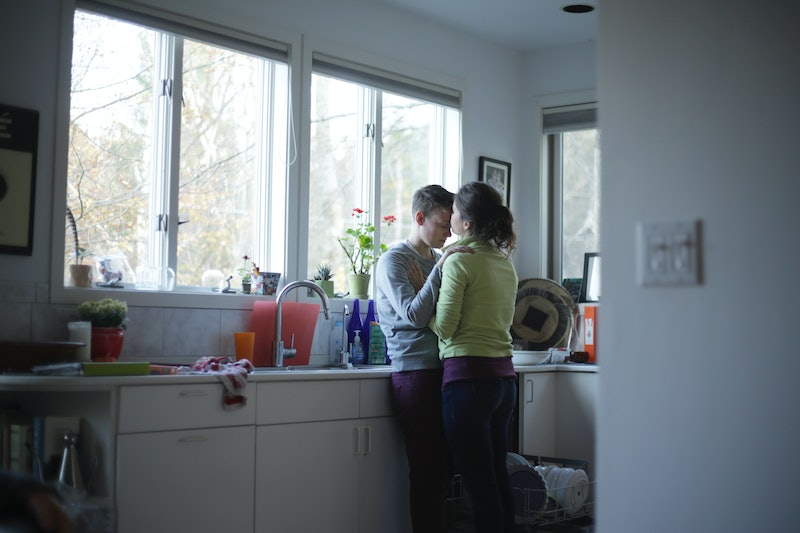 Even amid the legalization of same-sex marriage throughout the United and other recent strides for LGBTQ rights, there lingers a widespread misconception that same-sex couples are somehow different from heterosexual ones. Grace Brown's Spectrum photography series aims to change that. Depicting an array of same-sex partners in everyday settings with captions describing their relationships in ways that have nothing to do with their gender, the photographs show that love is unique for every couple — but also that it's fundamentally the same for people of all sexual orientations. In short, the series shows that love is love.

When Brown, a photographer and speaker living in New Jersey, started the project a couple years ago, she "had this feeling that people were either romanticizing LGBTQ couples or not acknowledging our existence," she tells Bustle in an email. "It was earlier on in my relationship, and I still really struggled with the idea that my love for [my partner] could be considered 'less than.' I wanted to portray the love I felt, and the love other couples felt, in photographs."

Brown adds that she hopes her photos make LGBT relationships more visible and mainstream, bringing us closer to a day when projects like hers are no longer necessary:

I wanted to normalize LGBTQ relationships, both for people who romanticize and people who disagree. I wanted to show that we really are just like everyone else, in our quietest moments, it is just us. I also wanted to create a space that gives hope for those who are still struggling with their identities.

Each photograph on Spectrum's Tumblr and Facebook page is captioned with quotes from the people in it describing what they love about their partners. Daniel, one of the subjects pictured above, said of his partner: "Kyle has taught me how to love properly. I came from a broken home, where love was rarely around, but being around him and feeling how much he loves — not just me, but everything he does — makes me love and appreciate life so much more than I could have ever hoped."

The photos capture a variety of couples and settings: Some encapsulate intimate and private moments while others display couples out in public; some depict young lovers while others show parents with children.

Regardless of what subjects or scenes the photos depict, they could all be replaced with different people of any gender and retain the same meaning.

The universality of the photographs and captions demonstrates that same-sex relationships are really just relationships — something that shouldn't need explaining, and yet somehow still does in our current climate. As comedian Liz Feldman wrote, "I am very excited about 'gay marriage,' or as I like to call it, 'marriage.' Because I had lunch this afternoon, I didn’t have 'gay lunch.' And I parked my car, I didn’t 'gay park' it."

The only thing that makes these relationships different from heterosexual ones is that they are often either stigmatized or treated as remarkable. But Brown hopes this won't be the case for long. Eventually, she says, "I hope projects like these are boring — that no one really cares to either put LGBTQ couples on a pedestal or feel like we are less than straight love. I have a feeling that will be the case in the next couple years — we will be old news by then, and that's better than anything."