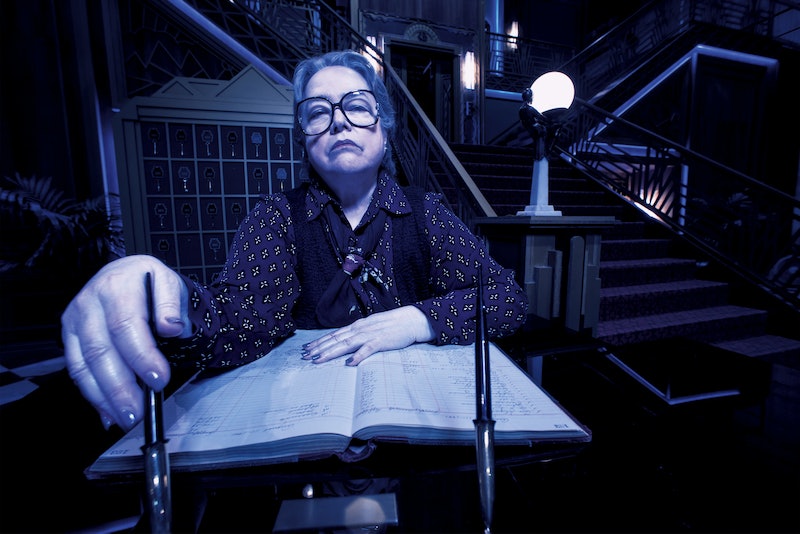 With Halloween right around the corner, American Horror Story: Hotel has started it season of terror at just the right time. As viewers are just beginning to see, the fictional Hotel Cortez has a sordid history of unsavory events and characters that could chill anyone's blood. Well, fortunately for those of us who love the macabre, you can visit a real haunted hotel like the Cortez near you that may have a similar past.

Our country is lousy with haunted history. Hotels tend to harness a big chunk of it simply because of the seedy characters that can sometimes call them home for extended periods of time. Things that go bump in the night are bound to happen. Luckily all of these horrifying hotels are actually places that allow visitors to explore for the day, and if you are truly a thrill seeker, some of them will let you shack up for the night. There is a haunted hostel in every nook of the nation, so you are sure to be within travel distance of at least one.

Tales of murder, suicides, and ghost sightings are all found lurking in the hallways of these creepy refuges. If these things sound like your cup of tea (or maybe goblet filled with the tears of the innocent), then take a look at this list of real life Hotel Cortezes and start mapping out your travel plans. Just make sure you bring a buddy, because no one should hang with dead people alone.

New Orleans actually holds the distinction of being "America's Most Haunted City" and Hotel Montelone boasts about their haunted reputation on their website, saying it's known for "known for being one of the premier haunted hotels in New Orleans." Interestingly enough, the season of American Horror Story: Coven was actually based on true events right out of New Orleans. So, there's plenty of scary claims to fame to keep you interested. The Hotel Monteleone was actually named a "hotbed" of paranormal activity by the International Society of Paranormal Research in 2003, but make sure you request a room on the fourteenth floor (which is technically the thirteenth) because that's where a lot of the shenanigans seem to be going down.

The Roosevelt was a swanky joint that was catered to the glamorous movie stars back in the day. The list of celebs that have stayed there is insanely impressive. It hosted the likes of Marilyn Monroe, Greta Garbo, Clark Gable, Charlie Chaplin, Clara Bow... I mean, the list goes on and on. Much to historians' dismay, it was renovated back in 1984 and since then, the spirits of these long gone celebrities have been pretty salty about the changes. Sighting include, Marilyn Monroe's specter in a mirror that once hung in the room she always stayed in (but now resides in the lobby) and the ghost of Montgomery Clift is said to be rehearsing his line and pacing the hallways outside of his favorite room, #928.

The Omni Parker House has some pretty impressive history, including one very notorious guest. John Wilkes Booth stayed at the Omni in April 1865. There is even records that show that while he stayed there, he took some time at a shooting gallery near to the hotel to practice his aim. Eight days later, he would assassinate President Lincoln. If that's not creepy enough for you, the hotel's website itself boasts about its hauntedness saying elevators have been known to abruptly stop at the 3rd floor for no reason. The doors will open and no one is there. The owner of the hotel, Harvey Parker, is also said to be spotted frequently walking around the 10th floor. Many guests claim to hear sounds, voices, and see people dress in clothing from the 1800s. So, bust out your butter churner and stay a night.

4. The Ellis Hotel In Atlanta, Georgia

The Ellis Hotel (once called the Winecoff Hotel) has a tragic history. In December of 1946, it was the site of a horrific hotel fire (the worst in US history) that killed 119 of the 280 guests that were staying there at the time. The problem stemmed from the fact that the hotel had zero fire exits, zero sprinklers, and zero alarms of any kind. Those poor people didn't stand a chance. Many jumped to their deaths, while others perished in the flames. It was a tragedy that actually spurred on nationwide fire safety reforms, so Ellis Hotel guests are sure to stay in rooms with proper fire safety equipment as "The updated codes required sprinklers, multiple exits and bans on flammable materials in buildings."

Still, guests to the Ellis Hotel have claimed to hear screaming, footsteps, and have claimed to be awakened to the smell of smoke. Claims of people seeing faces screaming in the windows have also circulated.

5. The Drake Hotel In Chicago, Illinois

The Drake is seriously filled to the gills with nasty stories. Famous murderers Leopold and Loeb were interrogated at The Drake. A prominent woman, Adele Born Williams was murdered by a mysterious "woman in black" at the hotel in 1944 and the case was never solved. The most curious of the ghost stories seem to surround a "woman in red" (must we always be defined by our clothing choices?!) who people have claimed haunts the tenth floor of the hotel. Her backstory involves her allegedly finding her husband cheating at a party at the hotel in 1920 and subsequently jumping to her death out of a tenth floor window. Guests now reportedly see this woman dressed in her red dress roaming around the tenth floor. I say buy her a drink if you do see her, girlfriend could use one.

The Stanley is famous for being the hotel that inspired Stephen King's The Shining. He and his family stayed in room 217 in 1974, and what he experienced there gave him the foundation to write one of his most famously terrifying works. The hotel is very proud of their haunted status, and even offers ghostly tours of the most haunted locations. There is also coincidentally a famous story surrounding room 217. In 1911, a gas leak caused an explosion in the room after a maid entered to clean up. Though injured, the maid survived and continued to work for the hotel until she died. Now people have claimed she haunts room 217, folding clothes and placing them in closets and drawers for guests and also trying to force unmarried couples apart in bed. Saucy!