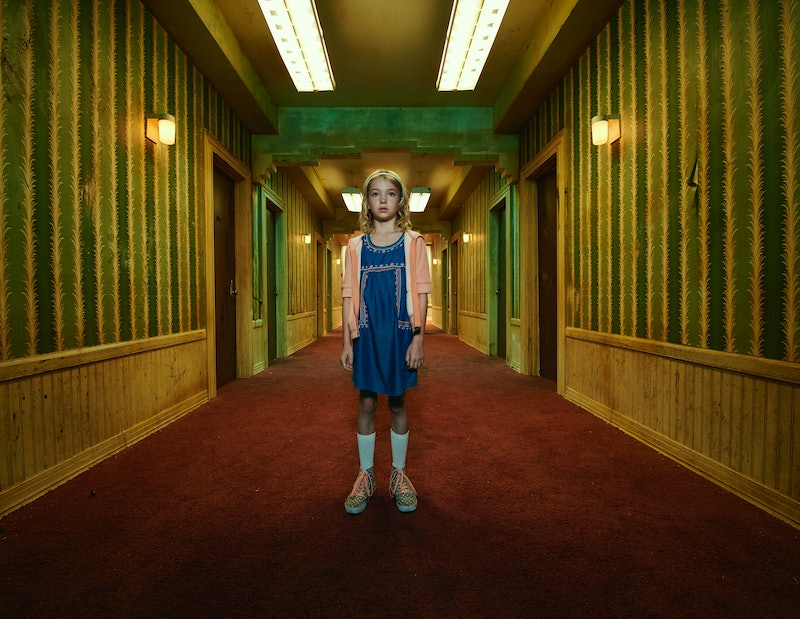 You can check in... but you can't check out. When American Horror Story: Hotel opens its doors this Wednesday night, viewers will be privy to the darkest iteration of FX's horror anthology since Season 2's claustrophobic Asylum — according to showrunner Ryan Murphy, at least. "It's much more dark," he teased back in June, calling it "a little bloodier and grislier I think than anything that we’ve done before." But how realistic will the season be? Is AHS: Hotel based on a real hotel?

Most of the action of AHS's fifth season will take place within the confines of the Hotel Cortez in Los Angeles, California. And, while there are hotels named "Cortez" in the world — including ones in Bolivia and Mexico — this one is very much a fabrication: There is no Hotel Cortez in L.A. However, that doesn't mean that everything about the fictional setting is made up. "We were really inspired by the idea of this hotel surveillance video that showed a girl getting into an elevator in a haunted hotel and who was never seen again," Murphy told the audience at the show's TCA panel this summer.

The showrunner is referring, of course, to the mysterious case of Elisa Lam, a 21-year-old Canadian student who went missing from the Cecil Hotel in Los Angeles in January of 2013. She was found over a month later floating in the rooftop water tank of the hotel after guests had complained of foul-tasting water. Some of her last moments were captured on a hotel surveillance camera, as the young woman entered an elevator behaving erratically shortly before she vanished.

What made the Lam case even more spooky was the fact that it took place in a hotel that already had a reputation for being one of the most haunted locations in the city. The Cecil, which was built in 1924, has an extremely sordid past. CNN reports at least three guests have committed suicide by jumping from the windows of upper floor rooms — including one woman who landed on a pedestrian below, killing him as well. Not just one but two serial killers made the Cecil their base of operations: Richard Ramirez (aka the "Night Stalker"), who was convicted of murdering 13 people in the 1980s and would dispose of his bloody clothes in the dumpster behind the hotel; and journalist Jack Unterweger, who killed 12 people in the '90s, including prostitutes he would instruct to sneak into his hotel room from the fire escape.

Most notoriously, the Cecil is one of the last places Elizabeth Short was seen alive before she was brutally murdered in 1947 and given the nickname "The Black Dahlia." Her body was found mere blocks from the hotel cut in half at the waist and her mouth mutilated from ear to ear. If this sounds familiar, it's because the Black Dahlia was already portrayed in AHS: Murder House by Mena Suvari. With confirmation that Hotel will connect directly to Murder House , could we be seeing the spirit of Elizabeth Short again sometime soon?

But, the Cecil isn't the only real-life hotel that inspired the Cortez. Although the Cecil may have given Murphy the modern day inspiration he needed to formulate the idea of the season, the fictional hotel's history comes from another very real — and very twisted — establishment. When Hotel 's characters and backstories were first unveiled in August, it was revealed that AHS mainstay Evan Peters would be portraying Mr. March, "the builder and owner of the hotel from the 1930s, and he is unique. He’s designed a hotel to cater to his specific needs, which tend toward the dark evil."

Those who have read Erik Larson's bestselling non-fiction book The Devil In The White City will recognize that Mr. March and his hotel of horrors is clearly based off the true story of H.H. Holmes, a serial killer who terrorized the Chicago World's Fair in 1893. He built a hotel on the outskirts of the festival, where he would trap and kill his guests, later selling their organs and skeletons to medical schools for cash. After his discovery, the hotel was dubbed the "Murder Castle" due to its nightmarish design, which included false doors, stairways that led nowhere, trapdoors, chutes to the basement, gas chambers, dissection rooms, and crematoriums.

Although Holmes only ever officially confessed to killing 27 people — only nine of which could ever be "confirmed" through their remains — it is suspected that he actually murdered over 200 people in the year his Murder Castle was in active business. (By the way, if you're jonesing for another retelling of Holmes' story Leonardo DiCaprio will star as the killer in an upcoming film based on Larson's book, directed by Martin Scorsese.)

Oh, and just in case L.A.'s Cecil Hotel and Holmes' Murder Castle aren't enough horrifying inspiration for Ryan Murphy, there are plenty of other haunted hotels around the country he can draw ideas from. One thing's for sure: It's going to be a while before I feel brave enough to sleep in a Best Western again.