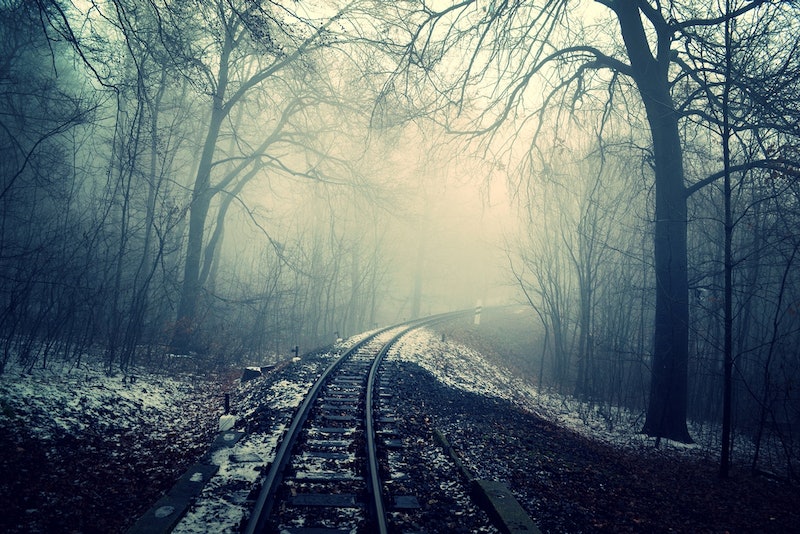 In our modern society, where non-stop surveillance is the norm and going a few hours without a social media update can lead to worried texts from friends and family, it feels like creepy, unsolved crimes should be a thing of the past. How can anyone hang around in the shadows, planning evil deeds, when there's a closed circuit camera on the side of every building? How can you disappear completely in an era of GPS? What are the odds that anyone will try to engage in some kind of fiendish plan without bragging to the internet about it (very low, it turns out)? When we all know so much about each other — even how many of the people in any room we enter are single — how can murders and disappearances go unsolved?

And yet, against all those odds, people still keep finding new ways to be creepy and evil — even with the internet watching our every move. In fact, despite all the surveillance and monitoring that are a part of our daily lives, one-third of all murders in the United States go unsolved today, a lower solve rate than we had 50 years ago. So know that the unsolved mystery isn't a thing of the past — being more connected doesn't necessarily make us any safer, or the world any less alarming and weird.

These five unsolved crimes and disappearances prove that though the world may feel smaller nowadays, it isn't necessarily safer...or any less creepy.

1. The Death Of Alan Jeal

In February 2014, a man's body washed up on a British beach. He was nude, had injuries to his head, chest and hand, and most creepily, had a sock and a pair of iPod headphones shoved into his mouth. The man, 64-year-old Alan Jeal, was thought by some to be a victim of robbery (his credit cards were never recovered, but also never registered as used) and thought by others to have died by suicide (he was reported by some outlets to have recently purchased ankle weights and a weighted vest). But police never came to official conclusion about what killed the man, who was captured on closed circuit cameras walking through a bus station shortly before his body washed ashore.

2. The Death Of The De Ligonnes Family

French law enforcement found five members of the artistocratic de Ligonnes family buried in their own backyard in April 2011 — mother Agnes and children Arthur, Thomas, Anne and Benoit, as well as the family's two pet dogs and a severed human leg. Not included in the familial mass grave? Xavier Dupont de Ligonnes, the patriarch of the family, who had given several friends some very far-out explanations as to why his family was missing, including that he was working as a secret agent.

The days leading up to the murder included more than one eerie event. A school friend of Thomas said that the young boy had received a text message while the two were hanging out, claiming that his mother Agnes had been in a bike accident and that he needed to return home immediately. When the friend texted Thomas later that day to ask after his mother's health, he received text messages that he claimed did not sound like Thomas. After that day, none of his calls to Thomas were returned. And shortly before the bodies of the de Ligonnes family were discovered by police, Xavier de Ligonnes' former mistress received a note, which read, "We had a good time together but something bad may now happen."

Xavier de Ligonnes is considered the prime suspect in his family's murder, and many think the crime was financially motivated — Xavier had been born wealthy, but was thought to be having financial troubles around the time of the murders. Though there have been many sightings of Xavier de Ligonnes in the years since, he was never caught by law enforcement. Some think he may have committed suicide, while a letter sent to a French journalist this year — a photo of two of the de Ligonnes sons, with the words "I am still alive" scrawled on the back — has been taken by some as proof that Xavier is still alive, and still on the run.

In 2009, a person walking their dog on the desolate, desert outskirts of Albuquerque, New Mexico, came across a human bone. That bone turned out to be part of a mass grave containing 11 women, all thought to have been killed by a murderer that has been nicknamed the West Mesa Bone Collector. The most brutal crime in New Mexico's recent history is not any closer to being solved today than it was when the victims were first discovered — police have found no witnesses, and the grave included no forensic evidence (experts estimated that the women had been murdered between 2001 and 2005, years before their bodies were uncovered). Some believe that the crime hasn't been taken as seriously as it should be by law enforcement because many of the murdered women were sex workers.

This past June, accused serial rapist Joseph Blea, who was sentenced to 36 years in jail for a sexual assault committed in 1989, was being considered as a suspect for the murders — which police believe were all committed by the same person — but there have still been no arrests or formal charges in the case.

4. The Disappearance Of Maura Murray

On February 9, 2004, Maura Murray, a 21-year-old nursing student at University of Massachusetts, Amherst, told her professors and boss that she had to leave town due to a family emergency, and would be gone a week. Murray packed her car and drove off, crashing her car in a snow bank in rural New Hampshire, near the White Mountain National Forest, several hours later. According to witnesses, Murray emerged from the crash uninjured, told a bystander that he didn't need to call the police, and left the scene before responders arrived. Murray was never seen again.

The story is made more mysterious by the fact that Murray's family told police that there had been no emergency. But the trip out of town did not seem to be spontaneous: Murray had called a few hotels in New Hampshire in the days leading up to her disappearance, and police found directions to Burlington, Vermont, in her car.

There have been no real leads in the case, though a few people did come forward with strange information about the days leading up to her appearance: Murray's supervisor at her on-campus job reported that Murray received a mysterious phone call while on the clock four days before her disappearance — the supervisor claimed that Murray burst into tears during the call, but the supervisor never learned what the call was about, or who Murray had spoken to. But despite all the speculation that followed her disappearance (and as someone who was attending college in Amherst, Massachusetts, at the time when Murray disappeared, I can tell you that there was plenty), no trace of Murray was ever found.

And on a lighter note: Eleven human feet have washed up on shores near Vancouver, British Columbia, and Washington state since 2007. The disembodied feet were all wearing sneakers. As spooky as this all sounds, local scientists and law enforcement have come to the conclusion that there's no foul play involved, because these feet weren't purposefully severed; rather, the feet had natural detached from bodies in the ocean as part of the post-death decay process.

In the past, the feet would have stayed at the bottom of the sea, with the rest of the body they were once connected to. However, because all the shoes were in buoyant sneakers filled with air cushions and similar technology, they floated to the surface. That should be a comforting thought to hold on to the next time you find a severed foot during your beach vacation, right?