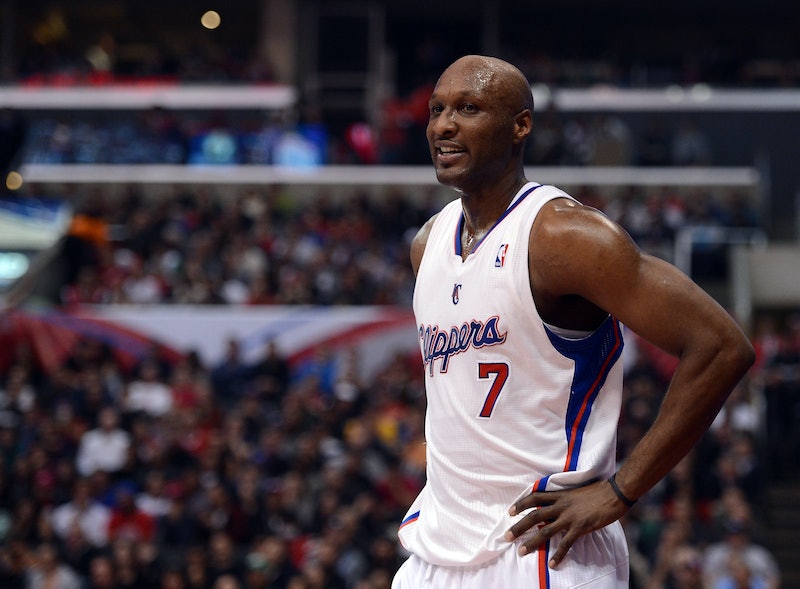 On Tuesday evening, reports surfaced that Lamar Odom was hospitalized after being found unconscious in his room at Dennis Hof's Love Ranch South, a brothel, near Pahrump, Nevada. According to a statement released by the Nye County Nevada Sheriff's Office, authorities were called on Tuesday afternoon when Odom was found "unresponsive." The statement also reveals that after being seen at a local hospital, the 35-year-old was transferred to a hospital in Las Vegas. In light of this news, for those of us who have followed the former NBA and reality star in recent times, it's hard not to think about the incredibly tough year Odom has had.

As many fans of the basketball player know, Odom had a dramatic upbringing — something he was open about when appearing on reality shows Keeping Up With the Kardashians and Khloe & Lamar with ex-wife Khloe Kardashian. Odom was raised in the Jamaica neighborhood of New York City's Queens borough and has long had a strained relationship with his father. Odom has openly claimed his father struggles with heroin addiction, which he spoke about on Khloe & Lamar. In addition, at age 12, he lost his mother to colon cancer.

Later in life, Odom saw more loss when one of his own children with ex Liza Morales passed away due to Sudden Infant Death Syndrome.

As for the recent tragedies in his life, this year two of his close friends died. In June, Jamie Sangouthai, Odom's best friend, died at age 37 due to a drug related bacterial skin infection. And, only days after Sangouthai's passing, another friend of Odom's, Bobby Heyward, died of a reported drug overdose.

On top of all of this, also this year, Kardashian and Odom finalized their divorce in July.

Clearly, this must have been a painful year for Odom and it's on top of what has been many tough times in his life overall. It's sad to hear that he's going through yet again more pain, so hopefully he's able to pull through. He has many loved ones and fans out there who are rooting for him.