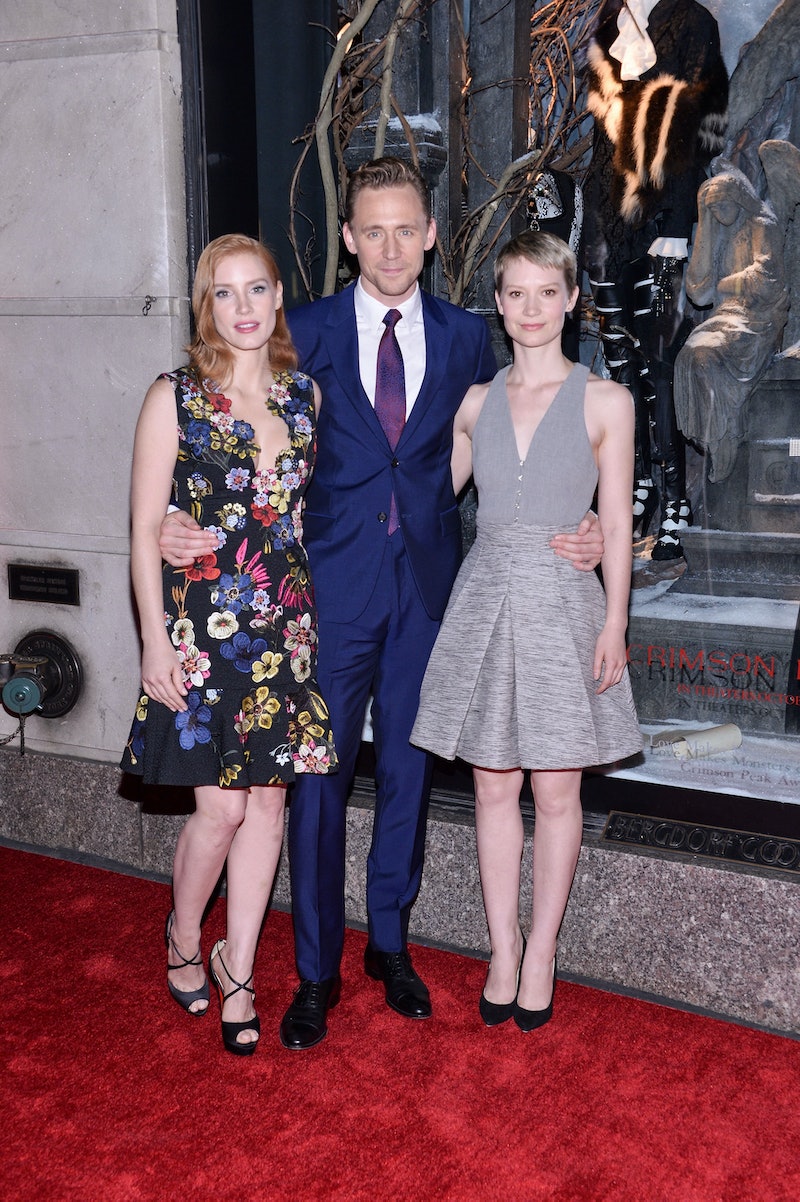 There are a lot reasons to be excited for Guillermo del Toro's latest flick, Crimson Peak — I mean, come on, the film features (as cartoonist Kate Beaton has charmingly dubbed them) "murder ghosts," two rad female leads, and yes, a sex scene with Tom Hiddleston. Adding fuel to the fire? Well, the press tour for the film has been seriously stylish — Mia Wasikowska has been charming us all across Western Europe, and Jessica Chastain (who recently killed it on the cover of W Magazine ) is just as fabulous as ever, in everything from Roland Mouret to Lela Rose.

Most recently, the fashionable Crimson Peak duo (plus an equally stylish Tom Hiddleston) wowed at Bergdorf's — the Bergdorf Goodman store in NYC celebrated the upcoming premiere by unveiling some newly-decorated storefront windows inspired by the movie. Their two looks couldn't be more different, but both were fashionable in their own way — Chastain went for an ultra-ornate embellished floral frock from Erdem, while Wasikowska went the minimalist route in gray, pleated Alexander McQueen (which paired perfectly with her mod pixie cut). Oh, and for his part, Hiddleston went for McQueen as well, and as he told Vogue, "It’s perfect for the occasion, don’t you think?"

I don't know about you, but I'm certainly not arguing. Let's take a look!

Vibrantly gorgeous (and Ms. Chastain's signature Old Hollywood waves are as on point as ever).

So simple, but so, so pretty.

I'd be remiss if I didn't include a picture of Hiddleston rocking his self-described thematically-appropriate McQueen now, wouldn't I?

Come on, you know you want to watch this trio inhabit a haunted house and deal with murder ghosts. You know you do.

Want more awesome fashion? Check out the video below, and be sure to subscribe to Bustle’s YouTube page for more hacks and tricks!