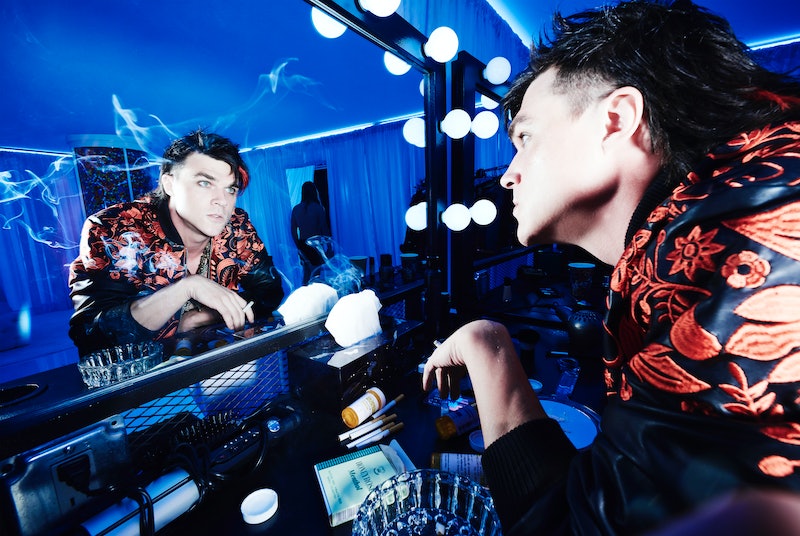 American Horror Story: Hotel has been introducing a number of memorable characters already. Week two has brought us a few new tortured souls to roam the halls of the Hotel Cortez and most of them look like they are going to be here to stay. One of these unfortunates that made one of the loudest entrances was a model named Tristan. Not only did he come crashing in with coke on his face and his tongue in people's mouths, but he managed to snag the attention of Gaga's character, Elizabeth. But what does Lady Gaga/ Elizabeth want with Tristan? We all know her motives can't be pure, and as it turned out, this situation is no different.

Bursting into the episode during Will Drake's fashion show in the hotel lobby, Tristan snorted some type of drug, made out with members of the party and sliced his own cheek with a knife while proclaiming he was done with modeling... all in the span of about three minutes. Tristan is a hot mess but he is certainly bringing that pretty boy with a bad side vibe/look that Elizabeth seems to always fall for. He is heavy into drugs (namely, cocaine) and seems to be hyper sexual, which also seems to be a few of her favorite things.

It looks like Elizabeth has managed to snag herself a new toy, but what will Donovan do now? And how permanent is Gaga's little infatuation? I suppose that is kind of the point. Damnit.