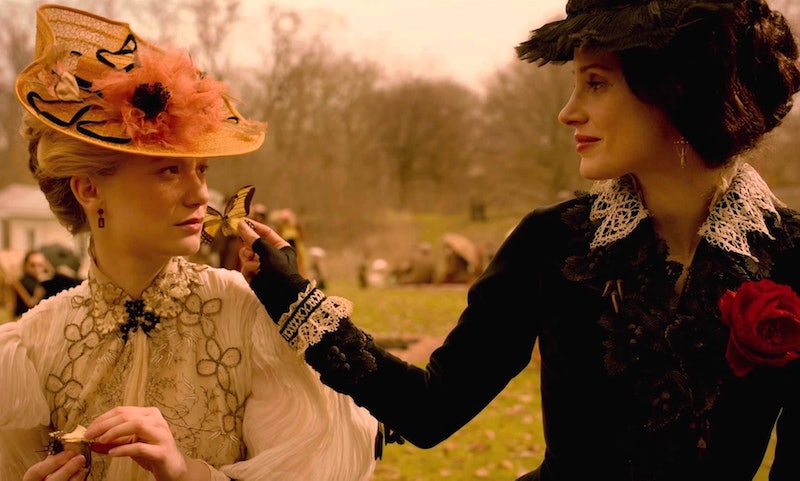 The gothic romance horror film Crimson Peak takes place in the late 1800s early 1900s, and, as such, implemented a delightful amount of Victorian-era feminism. Although I originally went to the movie for Tom Hiddleston, I left feeling thrilled by the gender equality in the Guillermo Del Toro film. That's right, Crimson Peak is definitely a feminist film, and that's what attracted Jessica Chastain (who plays Hiddleston's onscreen sister Lucille) to the story. Chastain told reporters at the New York premiere on Wednesday that, as a feminist, she was so excited to see how strong the Crimson Peak women were were written to be. "It was really important [to me]," she says. "When I read the script that was the first thing I noticed, that there were two amazing female characters. Most of the time I get a script and I'm usually reading the only female character in the movie."

Not that Chastain doesn't like working with Hollywood's leading men (in the case of this movie, talented actors like Hiddleston and Charlie Hunnam), but she appreciates when movies include more than one leading female role. Crimson Peak features not just Lucille, but also Mia Wasikowska's Edith who are definitely the powerhouse players in the movie.

"I like actors. I love working with men. But, I love working with women too," Chastain says. "I had the most fun I've ever had on a set on The Help. So, [for Crimson Peak] I was like, 'Oh my gosh, there's another girl! Yes!' It was really exciting."

It was very exciting as a viewer to see how in-charge the women in the movie were, too. Movie spoilers to follow.

Hiddleston and Hunnam did excellent jobs, of course, but neither of their characters were really the villain or the hero. Those titles belonged to Chastain and Wasikowska's characters, respectively. And, it wasn't like a dash of feminism was thrown in at the last minute, from the outset of the film, their strength was woven into the very fabric of their characters.

Edith Is A Working Woman

She's determined to be a published writer, regardless of her gender. Although the people in her life try to patronize her (her publisher remarks that her handwriting is quite pretty, but that her horror story needs a romance plot), Edith perseveres. She doesn't add a romantic storyline, and she types up her manuscript so her handwriting won't be the focus of people's attention. Although she notes it will take her all day to type her handwritten pages, she doesn't mind because her end goal is worth the effort. In fact, when Hiddleston's character, Thomas, first sees Edith typing, he wrongly assumes she's transcribing something for one of the men at the paper. She sets him straight without batting an eye, because of course a woman can be more than a means for men to get their voice out there. She strives, instead, to get her own voice out there and never wavers on that path, even when people like her father doubt her.

The sex scene in Crimson Peak features male nudity, but not female nudity, which is something Hiddleston championed. "It's so often in movies that women are more naked than men, and I think that's unfair," he told E! News. "We wanted to sort of redress the balance, and it's really important that Edith was calling the shots. She's the strongest character. She's a strong woman, and she's going to dictate how that goes down."

And, that's exactly what she does in the film. After about two seconds of Thomas being on top of her, Edith flips him over and becomes the one on top. It was a very visual representation of the power shift in both the relationship and the movie. She isn't going to be scared anymore (of the house, of Lucille, etc.) She is going to be in charge of her own fate.

The Final Battle Is Between Two Women

It's so rare to see two female characters have a truly physical battle. The movie didn't end with some sort of "catfight" with hair-pulling and name-calling. The movie ended with blood and knives and hatchets and, finally, for Lucille, a shovel to the head courtesy of Edith. The big showdown occurs after Edith takes her life in her hands and stabs Lucille before Lucille can kill her. Thomas briefly also tries to take down his sister, but Lucille is so distraught by him turning on her that she kills him, and, in a blind rage, goes after Edith. With Hiddleston's character dead and Hunnam's incapacitated in the cellar with his stab wounds, the battle takes place between the two ladies of the film without any interruption from a male character. It was a gritty scene: At one point Lucille's hand is sliced and slammed in an elevator and Edith jumps onto her previously broken leg so that it makes a horrible crunching noise, but both muster through the pain to try to defeat the other. Lucille is determined not to give up, even saying she won't stop until "I kill you, or you kill me." That kind of tenacity in the face of the pain on both their parts was impressive to watch.

At one point Charlie Hunnam's character, Alan, arrives to rescue Edith from the house of horrors, but a stab wound later and he's down for the count. It's actually Edith who ends up saving him, as she hides the injured Alan in the cellar so she can take on Lucille herself.

It was inspiring to see a movie that not only leaned heavily on its female characters, but championed them. Even better, though, was that it was a horror film that did this. All too often that genre treats its female characters in alarmingly sexist ways. The "slut" dies and the virgin gets to live, girls are killed while wearing bikinis seemingly just for the sake of getting some skin on screen, and, of course, there are the ever-present damsels in distress waiting for their men to save them.

It would have been easy for Crimson Peak to let the very attractive Thomas change his ways and save the day, or have Alan be the big hero, but it was so much better that Edith took control and rescued herself. There are no damsels in distress in this film, and that alone makes it worth the watch. Not to mention how well-acted, shot, and directed it is. Combine everything and add the feminist aspects, and it's an almost perfect film. (Could have done without Thomas pulling a knife out of his face, though.)

More like this
How To Fight For Reproductive Rights, Based On How Much Time You Have
By Courtney Young
Chris Hemsworth Joked That Baring His Butt In ‘Thor: Love And Thunder’ Was A “Dream”
By Brad Witter
What Does The Presley Family Think Of 'Elvis'?
By Arya Roshanian
Photos Of The 'Elvis' Cast vs. Their IRL Counterparts Will Have You All Shook Up
By Grace Wehniainen
Get Even More From Bustle — Sign Up For The Newsletter