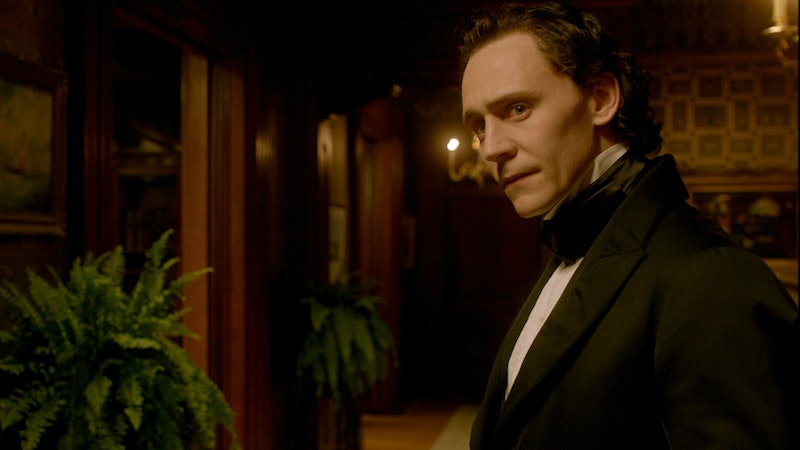 Listen up, kids. You should never take anything an actor says at face value, not even when Tom Hiddleston says it. For example, at Wednesday's New York premiere, Tom Hiddleston said Crimson Peak isn't scary. In fact, his exact words to reporters on the red carpet were, "This is not a scary film." I beg to differ. True, I'm not the best at handling horror films as it is, but Crimson Peak scared even Stephen King, so, it's not just me. But, Hiddleston followed his claim up by clarifying that it's "not like The Shining," so I think I get where he's going.

In the classic horror sense, Crimson Peak isn't scary-scary, per say. Nothing is put in the movie purely to torture viewers, so all the terrifying moments have a purpose to further the story. But, that's not to say the movie doesn't have its moments. Movie spoilers ahead.

There are quite a few jump scares, and there's some definite blood and gore. Like, a screaming ghost tries climbing its way through a floor. And, Hiddleston's character Thomas gets stabbed in the face. Oh, and Edith (Mia Wasikowska) stumbles upon a ghost in a bath with a cleaver in its head. And Thomas TRIES TO KILL A PUPPY. So, you know, if you have a weak stomach for horror it might be tough at times.

But, the movie is also beautiful, and everything in it made sense for the time period. The Victorians were fascinated with death, as the History Channel points out on their website. They often had "Memento Mori, objects designed to remind the owner of the death of a loved one" which took the shape of "locks of hair cut from the dead .... [or] photographs of dead relatives" among other things.

This is something the movie definitely captures, from the creepy photos of Thomas Sharpe's dead wives, to the disturbing painting of their murdered mother. The movie's costume designer Kate Hawley took all of this into account when building the wardrobe, and told Bustle about it on the red carpet at the New York premiere.

"The Victorian mourning jewelry and that constant presence of death remembered and always present with you, that's a motif we used throughout the film with skull tie rings and mourning ribbons and belts," she says. "And, that's something I learned that the Victorians loved."

So, yeah, there are definitely moments where the film is gruesome or horrific, but because it all made sense for not only the story, but the time period depicted, it helped mediate it a bit.

Also, I saw it twice and the second time I was definitely less terrified. So, perhaps Hiddleston is only immune to the horror of it now which is why he's claiming it's not scary. But, we can all rest assured that it's a different kind of scary than most horror films, and if I sat through it twice — anyone can.