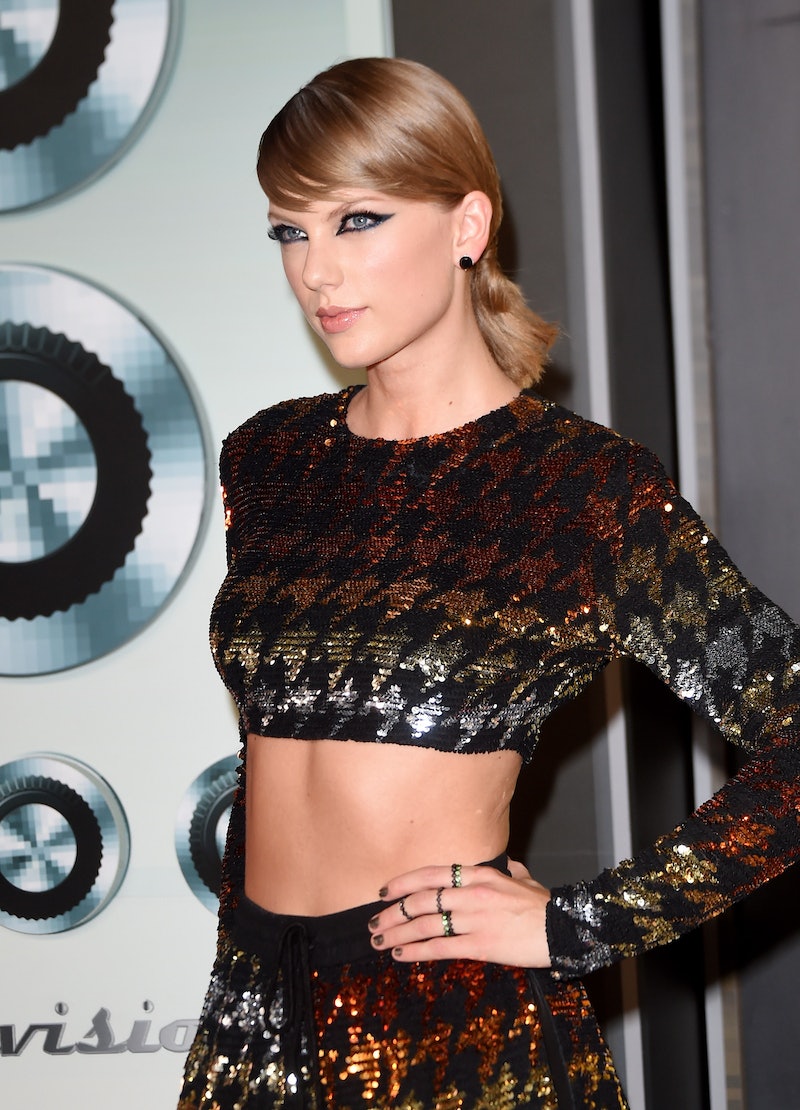 Taylor Swift has never officially confirmed who her girl squad revenge song "Bad Blood" is about. But it cannot be ignored that the Internet almost unanimously declared it was about fellow pop star Katy Perry about a year ago after Swift heavily hinted at that being the case. So, of course, when Swift sat down with GQ for her cover story, Perry's name had to come up. Taylor Swift addressed the person behind "Bad Blood" and specific accusations of it being Perry with the magazine, but, in light of her previous words, her comments are majorly confusing. She said,

You’re in a Rolling Stone interview, and the writer says, "Who is that song about? That sounds like a really intense moment from your life." And you sit there, and you know you’re on good terms with your ex-boyfriend, and you don’t want him — or his family — to think you’re firing shots at him. So you say, "That was about losing a friend." And that’s basically all you say.

The reason why the comments are so confusing to read now, more than a year after that now-infamous interview, is because they really do not match up. Swift's comments went well beyond simply saying, "That was about losing a friend." And if you look back at what she said then, her words really speak for themselves.

She told Rolling Stone at the time,

For years, I was never sure if we were friends or not. She would come up to me at awards shows and say something and walk away, and I would think, "Are we friends, or did she just give me the harshest insult of my life?" She did something so horrible. I was like, "Oh, we're just straight-up enemies." And it wasn't even about a guy! It had to do with business. She basically tried to sabotage an entire arena tour. She tried to hire a bunch of people out from under me. And I'm surprisingly non-confrontational — you would not believe how much I hate conflict. So now I have to avoid her. It's awkward, and I don't like it.

You have to admit, those are some pretty specific details. In fact, they're so specific that it was why the Internet was able to reach a conclusion so quickly as to who the song was about. It is rumored that a group of dancers did leave Swift's tour to join Perry's instead. It didn't help that both women had been romantically linked to the same man, John Mayer, in the past. Even though that wasn't the focus, it just upped the ante. So did a certain tweet from Perry, released around the same time of the interview:

It is pretty hard to tell what Swift is doing here with her latest interview. Is she trying to backtrack on her earlier comments? It sure seems like it, since she is now implying that the song isn't even aimed at "one person." Is she forgetting the specifics of what she told Rolling Stone? Well, the interview did happen over a year ago, so that wouldn't be totally out of the realm of possibility (less likely, though). Regardless of her intentions, something here really isn't adding up.