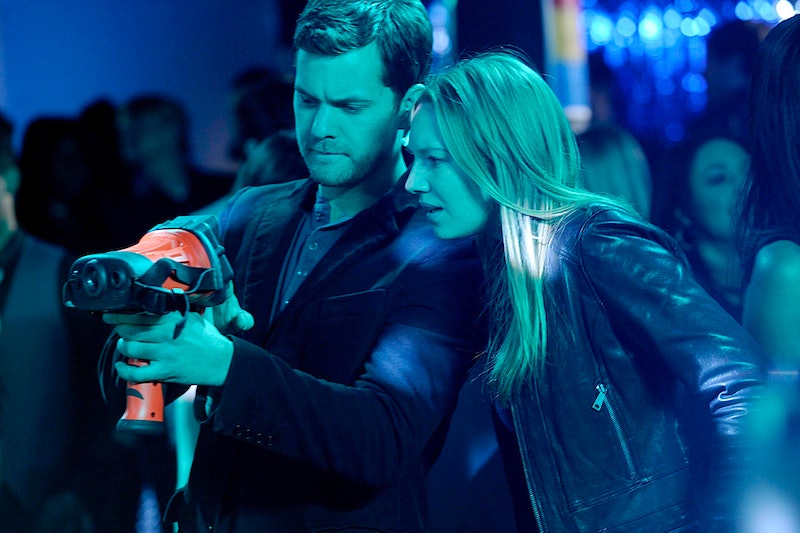 In case you couldn't tell from the smell of pumpkin spice in the air, it's almost Halloween. What are you going to do on the big night? Are you going to... A) Put on a mask and try to get away with trick-or-treating as a twentysomething? B) Assemble a hilarious pop-culture-referencing costume and head to the local watering hole with your friends? C) Get your scream on at a haunted house? D) Stay inside, snuggle up on your comfy couch, munch on some caramel corn, and marathon old episodes of your favorite TV show? Because I already know the answer (D, obvi!) I've gone ahead and assembled a list of the best Fringe episodes to watch on All Hallow's Eve.

FOX's beloved sci-fi series had its fair share of weird cases. From melting faces to ancient viruses, from gravity-defying bank robbers to animated acid trips, the five seasons of Fringe had it all. It wasn't always scary — in fact, the show was frequently hilarious, poignant, or romantic — but when it was scary, it was the kind of scary that lingers long after you've turned off your TV set.

In honor of the holiday, here are the nine spookiest episodes of Fringe that you should re-watch on Halloween. They may not be the best or even the most memorable hours of the show... but they're guaranteed to send a shiver down your spine.

The monster movie is a staple of any Halloween marathon. A group of animal rights activists break into a testing facility and release all the caged creatures — including one that probably should have stayed locked up, a lizard/bat/wasp hybrid that stalks the Fringe team through the sewers in a tense climactic confrontation.

When a woman is infected with a previously-extinct strain of syphilis, she suddenly starts craving spinal fluid — which means she stalks and seduces her victims before biting into their necks with razor-sharp teeth. Yes, this is Fringe's take on the tried-and-true vampire genre.

Reminiscent of the memorable (and terrifying) X-Files episode "Home," this second season installment featured the team investigating a string of disappearances in a rural Pennsylvania town. The secluded setting, the creaky old house, and the omnipresent scarecrow lend this episode the perfect Halloween ambience.

Fringe's riff on Frankenstein involves a man murdering transplant recipients... so he can retrieve their donated organs and reassemble a beloved, beautiful ballerina, who had tragically committed suicide. The moment where he "brings her back to life" with puppet-like strings is both nightmare-inducing and strangely sad.

A classic ghost story for All Hallow's Eve: When an elderly woman starts receiving visits from the apparition of her dead husband, is she communing with spirits? Or opening a portal to another universe? The Fringe team has to get to the bottom of this haunting case.

OK, so this one's mostly on the list for its holiday-appropriate title. But the case, involving both Olivia and Fauxlivia pursuing a serial killer with the help of his counterpart from the alternate universe features plenty of doppelgänger and evil twin action to satisfy any Halloween fan's creepy cravings.

What starts off like another ghost story, with an invisible force killing the residents of a high rise apartment, turns into something much more tear-jerking when the perpetrator turns out to be a young man rendered invisible by scientific experiments who just wants to be seen. The pursuit of the man — who can only be seen through UV light — through the pitch black hallways of the building is like wandering through a haunted house from the comfort of your living room.

If "Night Of Desirable Objects" is Fringe's version of an X-Files episode, then "Welcome To Westfield" is the show's loving homage to The Twilight Zone. Olivia & Co. become trapped in a quiet town rocked by a series of inexplicable events. Inhabitants have been going crazy, turning murderous, and killing themselves while everyone else seems incapable of leaving — all roads out somehow lead right back into town. Dun, dun, DUNNN!

Like other entries on this list, "A Short Story About Love" manages to blend horror and poignancy in equal measure. A hideously disfigured man murders men and then makes a perfume out of their corpses, hoping to distill the essence of love into a scent so he can fool their wives into loving him instead. Of course, like most mad experiments, it doesn't work and the Fringe team has to figure out how to stop him.

Watching these nine episodes in a row should only take about six-and-a-half hours, just the right amount for a Halloween night at home. So pour your cider, pop your popcorn... and don't forget to check under the bed for chimeras and zombie puppets before you go to sleep.