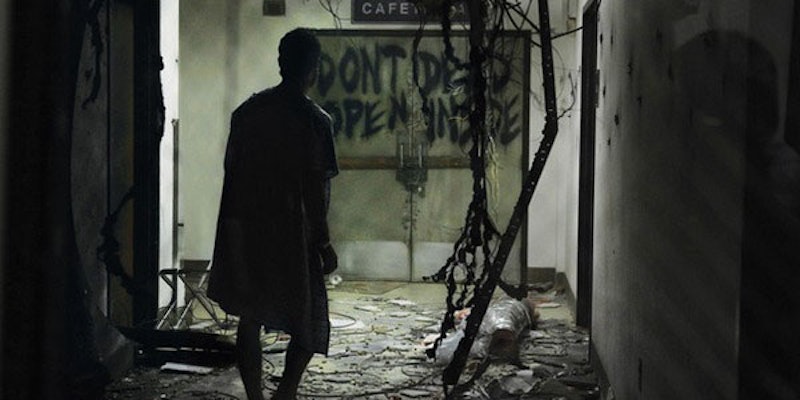 Surprisingly, this Halloween, tou don't have to head to your local movie theater to get the wits scared out of you. With the horror genre booming on TV right now, there are plenty of scares to be found on the small screen. In fact, there are some TV episodes scarier than any horror movie ever dared to be, because at the end of the day, a lower budget and excellent writing trumps glossy gore and jump scares any day of the week. From the old-school creepiness of The Twilight Zone to the nightmarish zombie apocalypse of The Walking Dead, TV has been offering up spine-tingling episodes for as long as the small screen has existed.

The 14 episodes on this list are all psychological masterpieces that play on your innermost fears: isolation, possession, PTA meetings — it's all fair game. Whether they were isolated one-off events on non-horror shows, or represented a particularly bad week for characters who already have it rough, these episodes measure up to The Ring, The Sixth Sense, and Paranormal Activity with ease. Skip the latest big screen scary movie (unless it is Crimson Peak , because you should go see that), and bask in these timeless small screen mini horror masterpieces — if you dare.

The premiere episode of The Walking Dead leaves you feeling as disorientated as Rick. It begins at the middle thrusting you and Rick into a world gone mad. A little girl is shot in the head, a hospital becomes overrun with the dead, and Rick is a singular man on a mission to find his family.

Every episode of Penny Dreadful is haunting, but none more so though than "Possession." Vanessa spends days locked in a battle for her life as the devil himself invades her body, mind, and soul until it seems there will be nothing left of her. Relentless in its depiction of Vanessa's possession, the hour is Victorian horror at its finest.

Alone in space with people he doesn't know, the Doctor finds himself with a clever monster he cannot see — but it is the hysteria within the humans that makes "Midnight" so terrifying. When fear and paranoia run rampant even the Doctor isn't safe. Allons-y.

School is scary enough without your parents and teachers holding Satanic rituals during PTA meetings. When such a mundane setting becomes the scene of raining frogs, ritual sacrifices, and one creeptastic villain, Mulder and Scully find themselves in way over their heads. The scariest part of all? The overwhelming sense that Mulder and Scully are facing something that cannot be defeated.

Leave it to Joss Whedon to turn a silent episode into an exercise in how to effectively make your audience weep from fear. No villain will ever top The Gentlemen.

Plane crashes are already the stuff of nightmares, but when you add in a mysterious island full of polar bears and pilot eating monsters, everything becomes so much more intense. The unease begins with the opening scene and never relents in what may very well be the best TV pilot ever.

7. "The Hitch-Hiker," The Twilight Zone

Imagine driving across country alone in the '60s when every route was still the scenic route and everywhere you turn the same man has his thumb out begging for a ride. Would you want to go his way?

The only thing scarier than aliens are humans. When the Torchwood gang encounters very real, very human monsters things go pear-shaped in a hurry, and even Captain Jack can't make a quip about the atrocities they witness.

The revelation of Violet's fate in this hour of AHS remains shocking and heartbreaking in all the best ways.

Seeing "HELP ME" scrawled backwards across every inch of the walls is all it took to leave me scarred for life by the episode. The rest of the scares were just a bonus.

Statues are everywhere, and this episode operates on one simple idea: what if they move when you aren't watching? Don't blink, guys. Blink and it's all over.

Ghostly children are automatically creepy, but when they try to murder living children, they take their inherent spookiness to a new level. Also, there are a whole lot of dolls in this episode.

Flickering in and out of existence, Spike is forced to face the place where he will spend eternity: hell. And it is not a pretty sight.

14. "The Hounds of Baskerville," Sherlock

Sherlock ventures into gothic territory when John and Sherlock investigate a mysterious case in the countryside. With a running time that clocks in at around an hour-and-a-half, this episode feels like a tightly plotted movie with a first-rate twist ending.

These episodes are just a taste of the small screen scares that are available. TV is busy reinventing the horror genre which is good news for people who prefer to be frightened on their own couches instead of in a darkened theater.

More like this
'Doctor Who's New Companion Has Been Winning Acting Awards Since She Was 18
By Shahed Ezaydi
Millie Gibson Still "Can’t Believe" She Was Cast As Doctor Who's Companion
By Brad Witter
Will 'The Walking Dead' Return For Season 12?
By Grace Wehniainen
A 'Grey's Anatomy' Alum Will Join Negan & Maggie's 'Walking Dead' Spinoff
By Alyssa Lapid
Get Even More From Bustle — Sign Up For The Newsletter