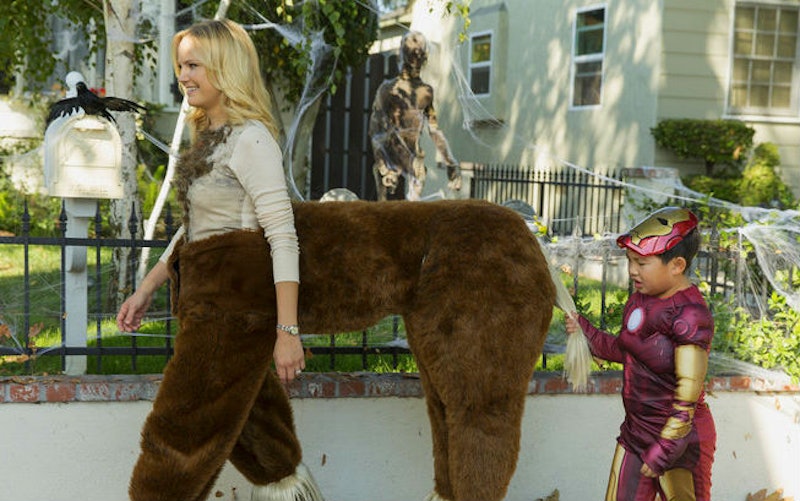 Starting a new sitcom is no easy task. Even the most successful sitcoms run the risk of coming off as heedlessly silly or cloying in their first few episodes (or first half-season, if we’re talking Parks and Recreation or The Office). But for many of the shows that stuck around, things started to turn around at Halloween. ABC’s Trophy Wife has just earned a nomination to join that club.

Perhaps part of the reason shows get better when the costumes come out is that Halloween generally falls around the fourth or fifth episode of a season, also known as the chemistry sweet spot. A sitcom, which relies heavily on the chemistry between its cast members as well as the characters’ ability to forge connections with the audience, needs time to weasel its way into our hearts. And when a sitcom finally makes that connection, the comedy factor gets a boost; jokes are just funnier when you’ve really started to understand and appreciate the characters delivering them.

And when you add Halloween on top of that – a circumstance for outlandish antics, topical costumes, and a holiday that pushes characters out of their comfort zones, you get the perfect set-up for the one-two punch. (The first punch is the laughter, the second part is giving the show a season pass on your DVR.)

Trophy Wife’s first Halloween episode accomplished just that, sending Kate (Malin Akerman) trick or treating with Burt (Albert Tsai) and Jackie (Michaela Watkins), while Pete (Bradley Whitford) holds a neighbor kid hostage as part of a witch hunt for a notorious Halloween prankster. In one quick, costume-heavy episode, we explore Pete’s crazier side, Warren’s penchant for dancing like Ellen DeGeneres, and Kate’s ability to be a step-mom – oh, and we’re giggling the whole way through.

There’s still time to see what Trophy Wife will do with this success (unfortunately, its ratings don't match its potential at the moment), but there are some seriously great shows that came before it, and they all found their groove when Halloween came along. Maybe there's some hope yet.

Mike Schur’s follow-up to The Office wasn’t off to a great start in its first six-episode season. It was still concerned with making Leslie Knope (Amy Poehler) a female Michael Scott, rather than the fantastic character she’s become, and the ensemble hadn’t yet shown us their crazy. During Season 2, bit by bit Tom (Aziz Ansari), Ann (Rashida Jones), Andy (Chris Pratt), and co. started to get a little insane, but by the seventh episode “Greg Pikitis,” it became clear that these were our kind of crazy people.

Leslie’s fierce dedication to Pawnee led her on a vicious hunt for a pre-teen prankster (the titular “Pikitus!”), Tom’s baller routine finally paid off when he dressed as T-Pain and saved Ann’s terrible Halloween party, and Andy gave us a taste of the ridiculously childlike adult we know and love when he was driven to tears by the young Mr. Pikitus’s taunting. Like Ann after her lame hospital friends attempted to kill her party, we began to realize that maybe life was better with the Parks and Rec department weirdos.

Much like its offspring Parks and Recreation, The Office didn’t really hit its stride until Season 2. And when it came to the Halloween episode we knew we were hooked. While it was fun seeing Pam (Jenna Fischer) and Phyllis annoy Angela when they too dressed as cats, or Phyllis referring to Dwight’s (Rainn Wilson) Sith Lord costume as a “Monk” costume, the episode wasn’t really about Halloween haunts or pranks. And that’s kind of why it worked. Michael (Steve Carrel) is forced to lay-off one person from the Scranton office by the end of the day, forcing him to be the bad guy on a day he’d normally spend checking on the party-planning committee to make sure they were on track. Instead, he spends the whole day procrastinating before firing the guy we never noticed lurking in the background: Devon.

But it’s the side plot that really works: while Michael stews over firing someone, Jim (John Krasinski) and Pam prank Dwight by applying for a position at another paper company in his name. We get the irresistible camaraderie between Jim and Pam, which comes crashing to a halt when she suggests he apply for the job, which would take him away from Scranton and away from Pam. She later apologizes and says she’d “blow her brains out” if he left, cementing the emotional hook of the “Jim and Pam” possibility and pointing out the fact that Jim’s feelings for Pam are keeping him from making other life decisions. It simultaneously grounded the show, and dangled the romantic carrot perfectly before our eyes.

In the case of the once-great Community, the Halloween episode (or more accurately, the Day of the Dead episode) marked the moment at which the wacky sitcom went from silly to absolutely, deliciously insane. When Annie (Alison Brie) decides to throw a Dia De Los Muertos party for extra credit in Señor Chang’s Spanish class, she needs Jeff (Joel McHale) to come so that the rest of their cohorts will attend. Throughout the episode, we find the budding friendship that will eventually lead to (sing it) “Troy and Abed in the Morning;” Shirley’s (Yvette Nicole Brown) inner insanity when she bashes Professor Slater’s car; Jeff’s ability to drop the cool act (or a hot girl) for his friends; Britta’s (Gillian Jacobs) fierce and half-misguided dedication to stopping “anti-feminist” sexy Halloween costumes; and finally, Pierce’s (Chevy Chase) ability to punctuate the rest of this nonsense with his hyper-insanity.

Community finally gave us the crazy, which we’d soon find was the series’ goal along.

Mindy Kaling’s Fox series is a tough one. While the first few episodes failed to elicit much of a response, even from people like myself who worship Kaling and her refreshing point of view, some of us stuck with it. “Halloween” was our reward. Just before we began to get the itch to jump ship, The Mindy Project turned on the light at the end of the tunnel.

After finding out that her ex-boyfriend’s (Bill Hader) wife is pregnant, Mindy decides to go to a Halloween party with her new love interest, despite being unsure about him. And since he’s a hot shot sports agent and it’s not yet a relationship, choosing a costume is a harrowing task. She has to impress Josh without giving it all away or turning him off. A fast-paced series of cuts show her working with Morgan to find a costume that shows off her “badonkadonk” and her “bathinkathink” (butt and brains, for the less colloquially-inclined readers), she settles on Diane from Cheers, which is of course a huge hit. (Although my personal favorite was Lil Wayne on the Prairie.)

And while Mindy’s winning our hearts with her costume quest, Danny (Chris Messina) and Jeremy (Ed Weeks) prove their characters don’t need to lean on Mindy to thrive. They take a trip to Long Island to get Danny’s drivers’ license, a task which proves to be near impossible.

And while this episode wasn’t perfect, it showed us that there was a reason to stick around for this floundering sitcom as it eventually found its voice.