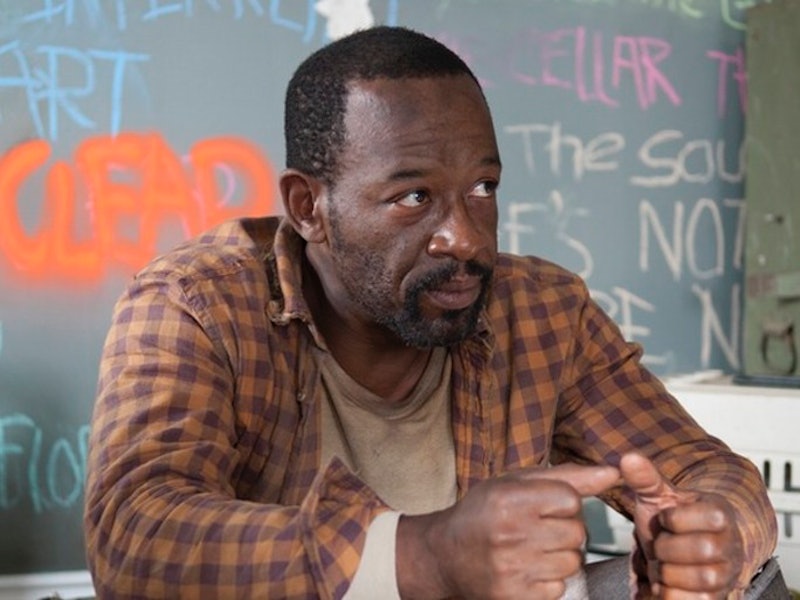 Morgan is back on The Walking Dead, and all is right with the apocalypse again. At least, that's how I feel. because Morgan has always been The Walking Dead 's most enigmatic character — and now it seems his deal might finally be revealed. According to TV Line, Season 6 of TVD includes a Morgan flashback episode that is set to explain what happened to him between Season 3 and Season 6. There is no word yet on when it will air, but according to the site, showrunner Scott M. Gimple wrote the episode during Comic-Con and he is proud of the way it turned out.

I, for one, cannot wait to see Morgan's big episode — I mean, the guy went from a protective father to a totally paranoid booby-trap master and now he is the king of Zen. No character deserves a flashback episode more than he does. Personally, I especially want to know what happened between the last time Rick saw a broken Morgan in Season 3 and Morgan's transition into the peaceful warrior he is in Season 6 right now. There's not much hope for clues at the moment either, since the Morgan on the show bears little resemblance to the Morgan of the comics — all there is to go on are Morgan's cryptic mention of a friend, and one tiny clue is not going to unravel Morgan's complicated backstory.

The identity of said friend is just one of many things the Morgan flashback episode needs to reveal. As far as I'm concerned, the following seven Morgan questions must be answered in the upcoming flashback episode, or I will eat everyone's last peanut butter protein bar.

1. When Did Morgan Turn Into A Staff-Wielding Badass?

The apocalypse is as good a time as any to start a new hobby, but when exactly did Morgan decide to make the staff his weapon of choice? It doesn't seem nearly as effective as a gun, a bow, or a sword, but it does fit in with his new outlook on life.

2. Is His New Friend Jesus?

Not Jesus in the Biblical sense, but the recently cast character named Jesus who is also a Zen master. Jesus is supposed to be a chill guy who favors using a staff. Coincidence? It doesn't seem likely.

3. How Long Did It Take Him To Leave Booby-Trap Village?

Morgan was not exactly the picture of mental health when Rick left him back in Season 3. I'm curious as to how long it took for him to leave the town he vowed to clear of walkers. Did he leave on his own accord, or did someone stumble into the town of Morgan who made a more compelling argument about life going on than Rick did?

4. Has Morgan Really Made Peace With The Deaths Of His Wife & Son?

I'm trying really hard not to suspect Morgan is still super damaged deep down, but I have a hard time believing he could come back from the trauma he experienced after having to shoot his wife and son. All of the losses Rick has been through have turned him into a deeply unstable man — and Rick is surrounded by people. Morgan was already pretty far gone the last time he appeared, so something or someone powerful must have prompted his turn around. There has to be more to Morgan's story than he is saying.

5. Does Morgan Have An Agenda?

Morgan is quite possibly my favorite character. Still, the fact that he clearly wasn't alone this whole time makes me suspect he has an agenda of some sort. Is he scouting locations for another group? Does he have unfinished business with Rick? An agenda doesn't necessarily have to be a bad thing, but I can't help but feel like Morgan is in Alexandria for a specific reason.

6. Is He Looking For Someone?

If Morgan's friend changed his life for the better, then you would think they would have stuck together. I don't think Morgan's friend is dead, because if he or she was, then Morgan probably wouldn't be the apocalypse's new poster boy for mental stability. Maybe Morgan originally set out to find the person who saved his life, and running into Rick was a happy accident.

7. No, Seriously, Who Ate His Last Peanut Butter Protein Bar?

Michonne said she didn't do it, and I always trust Michonne. (Even though she was definitely eating his food.) What if Morgan is totally on a vengeance quest to discover who ate the last peanut butter protein bar?! And who did it — Rick, Michonne, or Carl? Twist! (OK, this is probably not the case...but peanut butter is sacred, guys.)

Hopefully, all of these questions will be answered soon — but for the time being I am just going to focus on the Morgan goodness coming up in Season 6. Whether he is a little unhinged or training to be a Jedi, Morgan remains the coolest character of them all.