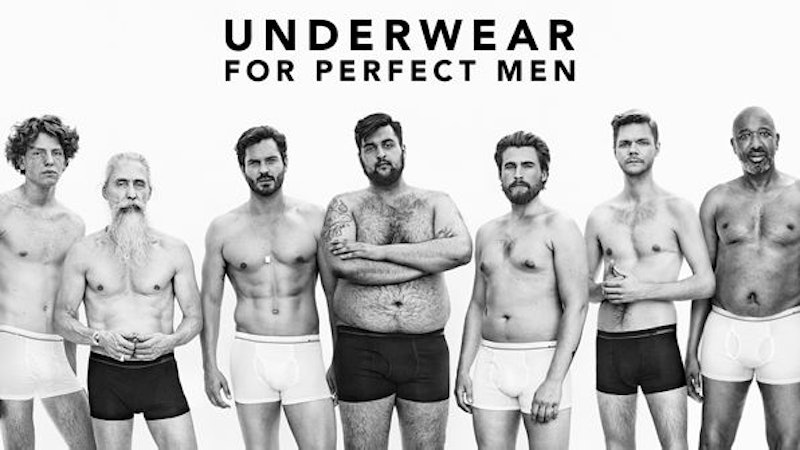 ICYMI, women aren't the only humans who struggle with finding body positivity. Men and male-presenting individuals experience their fair share of grappling with body image, too. This is precisely why Dressmann's "Underwear For Perfect Men" ad is so amazing. It reminds us that in conversations about self love and inclusivity, male body acceptance shouldn't be forgotten.

Most of us know that the media likes to present women with "aspirational" images of Barbie dolls with tiny waists and impossible thigh gaps, but it also likes to portray males as strong, big guys, toned and ripped to superhero proportions. Just think about the last commercial you saw: Was the dude in it just an average sized man? Now think about all the guys in your life: How many of them are chiseled and rippling with muscles? There's definitely a divide there, even if the pressures placed upon men to look a certain way aren't arguably as societally engrained as those placed upon women.

This is why Dressmann's new ad is so great: It celebrates all the different kinds of male bodies, with guys of different body types modeling its briefs. From the skinny to the hairy, the old to the plus size, these dudes are rocking it and proving that all bodies are perfect bodies.

According to Dressmann's website, "For decades people have been struggling with distorted body ideals. Ideals where someone else has decided what's beautiful and what's not. Who is normal, and who's not. Statistics show that 80 percent of all men are unsatisfied with their body." That's nearly four out of five men, which is a startlingly large number.

Dressmann goes on to explain, "The majority of people think that our unhealthy obsession with the body is a result of what's presented in advertising. That's why we will do what we can to change this. We want to take responsibility."

According to Metro, "It’s about letting dudes know that, you know what, it’s totally normal to not feel great about how you look. You don’t always have to be ‘strong,’ physically or emotionally. By welcoming men into the body acceptance movement, Dressmann hopes it will only make the message grow and become even more positive."

Because male body positivity matters too, here are three other times campaigns aimed to stand up against the "ideal" male body type. Here's hoping for many more.

In May 2015, male employees at ModCloth stripped down to their swim trunks to show support for their female colleagues' body positive swimsuit campaign. In the process, they did the same thing their counterparts did: Show that all types of bodies love a good beach day, and that they look darn good laying out on their beach towels no matter their shape and size.

2. When Target Used Its First Plus Size Male Model

Breaking away from the not-so-glamorous big-and-tall store options, Target is making strides to include options for tall plus size men, and it's actually using a man that fits that body type description to model the clothes. Target's newest model Zach Miko clocks in at 6'6" and wears XXL tall tees. It's nice to see an actual plus size model on the roster, and not just a buff guy wearing a size small but letting us know the XL option is available.

3. When ESPN Got Real About Athletes' Bodies

Body positivity reached the world of sports when ESPN Magazine decided to show the diversity of athletic bodies. There's a misconception in this world that to be an athlete you need to have a 12-pack and glutes of steel. There's also the school of thought that when you're plus size, you're automatically lazy.

More like this
What’s The Kibbe Body Type Test That’s All Over TikTok?
By Marilyn La Jeunesse
The Most Gorgeous Plus-Size Looks From The Met Gala
By Dominique Norman
Ed Hardy-Inspired Cross Nail Designs Are Majorly Trending
By Danielle Sinay
Machine Gun Kelly Wore A $30K Diamond Mani To The BBMAs
By Paris Giles
Get Even More From Bustle — Sign Up For The Newsletter