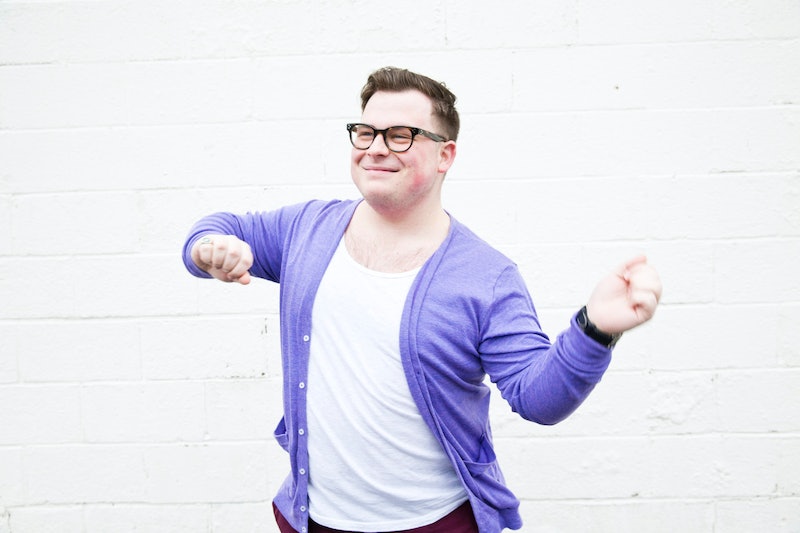 If you are female or female presenting and are fat, there are plenty of blogs to look to for fashion inspiration. There's no shortage of plus size fashion bloggers who identify as women, but when I started to look for body positive men's fashion blogs, I had a much more difficult time finding a space that celebrated the personal style of men above a certain size.

Of course, I am beyond elated to see the growing visibility of plus-size women such as Tess Holliday, who is on the cover of this week's People Magazine. I can't even put into words how it feels to see a body like Holliday's on the cover of People Magazine and have it celebrated as it is rather than shamed as a "before" photo. Achievements like Holliday's should absolutely be seen as major steps towards size acceptance.

Plus-size fashion continues to gain more mainstream momentum, but with exception of indie brands such as Parker and Pine, much of the growth we are seeing is still aimed towards women. And it's important to recognize that this doesn't show the full picture. Body positivity is for all bodies, and the images we see should not be represented by one type of body, gender, race, or orientation.

There's more visibility than ever before for fat bodies but I still want more. So I wanted to take the time to show some shine to the stylish men proving fashion has no size limit, and a few of whom inspire my own personal style.

The fashion blog Chubstr was started in 2010, which means it's been around longer than most of the beloved women's plus-size fashion blogs of today. Chubstr celebrates men of style and of any size and is a destination spot for plus-size men's shopping tips, product views, and OOTD submissions from Chubstr readers. With features on beer clubs and the latest in beard grooming products, it's clear that this is a space for building community in more ways than just fashion inspiration.

Chubby Guy Swag is exactly what it sounds like — fat guys looking totally fresh, plus-size men's shopping tips, and photos of other fatshionable men to create visibility for this underrepresented demographic. This Tumblr blog was created by Zacheser, who is totally killing it in both a cardigan and leather jacket in the recent photoset reblogged to Chubby Guy Swag.

The Tumblr of DMV-based stylist and personal shopper William Beave Brooks aims to inspire men to feel confident that they can be big and fashionable. He shares his personal style, including adorable photos in which he styles matching outfits with his daughter, and it really is a cuteness overload. You can also catch him sharing photos of other stylish dudes and giving tips on how to deal with the haters.

Body Positivity for Guys is a Tumblr blog that focuses on sharing images of male-identified, masculine-bodied, and/or masculine-presenting people for the purpose of fostering gender neutral fat acceptance. While the images on the blog can sometimes be NSFW, the diversity shown on the blog is so necessary.

I found the personal style Instagram of Michael-Anthony Spearman, The Big Fashion Guy, through blogger Fashion Forward Plus, who regularly shares fashionable plus-size men on her page alongside stylish women. Spearman is literally someone who always looks sharp and super dapper, which I totally appreciate. With a pocket square collection that won't quit, Spearman proves it's the year of the chubby gentleman.

I found the Lookbook.nu profile for Texas-based visual merchandiser Gage Sharum through a plus-size male modeling magazine, The Justice, which sadly hasn't been updated since 2014. Lucky for me, though, Sharum's photo was the last reblogged photo by The Justice and through some Internet sleuthing, I found his awe-inspiring Lookbook.nu, which was recently updated! I can see myself wearing a lot of Sharum's minimal pieces. The styling of all of his looks is visually flawless.

You may recognize Tumblr blogger Marquimode because his Instagram was featured as one of the fashionable men you should follow earlier this month. And you should totally follow him on Instagram, Tumblr, and everywhere else he posts his flawless OOTDs. His wardrobe includes sheer blouses, lots of cheetah, gaudy printed blouses, and it all has a very '90s vintage street feel. If he ever did a closet sale, I would be all over it.

More like this
Instagram & Facebook May Finally Lift Their Notorious Nudity Ban
By Allie Fasanella
Selena Gomez Dismissed Trolls' Comments About Her Body After The Golden Globes
By Stephanie Topacio Long
The Internet Can’t Get Enough Of Viktor & Rolf's Upside Down Dresses
By El Hunt
Phoebe Dynevor Serves ‘Bridgerton’ Underboob In Stunning Floral Gown
By El Hunt
Get Even More From Bustle — Sign Up For The Newsletter
From hair trends to relationship advice, our daily newsletter has everything you need to sound like a person who’s on TikTok, even if you aren’t.