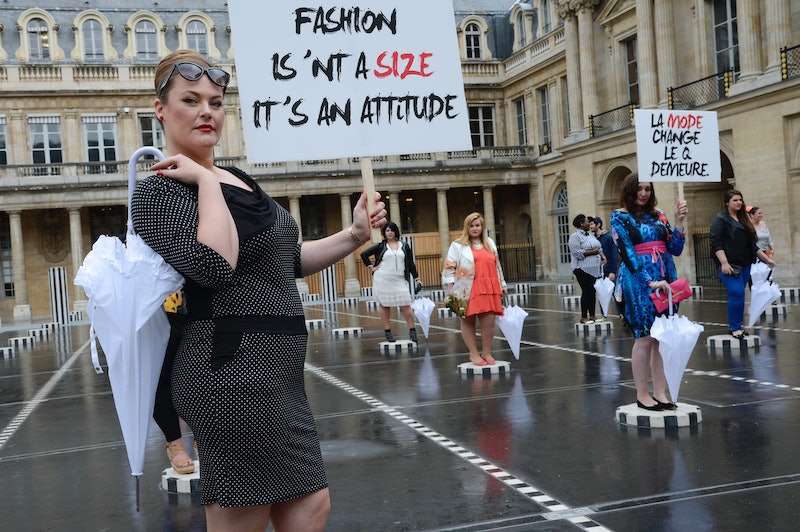 It's no secret that the fashion industry has long been a culprit of body shame, with thin, white, Photoshopped models having become the norm for almost 20 years, and the rest of us not in that demographic being pushed into the margins. But there are body positive social media campaigns combatting this narrow image of beauty — catering to the majority of women (and men) and redefining what "beautiful" actually means.

And the good news is that things are actually starting to change. This year, plus-size models were seen taking over the runways of Fashion Week, diversity in fashion became more prevalent (although much work remains to be done), and the word "fat" began to lose its status as a "bad" or "insulting" term. Yay, progress!

When we see a shift in cultural attitudes, the question everyone always asks is why. Why is it that sizeism is starting to become less socially acceptable and our relationships with body image a little less toxic? There's no surefire answer, of course, but we can certainly point to one obvious culprit: The Internet!

Social organizations online have become very popular in the last few years, as hoards of women have taken to platforms like Tumblr to talk about body image and reject our culture's body shame. Body positivity is trending and it's pretty awesome!

Relating this back to fashion, of course, here's a list of nine amazing social media campaigns that are changing the culture of fashion from fatphobic to all-body-loving.

Since 2012, the #Fatkini movement has been going viral, featuring women of size taking selfies in their bathing suits. Where just a few years ago it might have been considered a rare occasion for a fat woman to be wearing a bathing suit, it's now being celebrated all over Twitter and Instagram.

The hashtag and movement was started by GabiFresh, a fashion blogger and body positivity advocate. She began the hashtag through a collaboration with xoJane, ultimately asking readers to submit photos of themselves wearing bathing suits. Soon after, the phrase went viral on social media. In fact, she generated so much buzz that she has now designed three collections of fatkinis for Swimsuits for All.

Last year, Victoria's Secret came out with a controversial campaign for their lingerie, entitled The Perfect Body. The problematic nature was down to the women featured in the advertisements, who were all thin — ultimately not doing much as far as really encouraging women to love their bodies. In fact, thousands cried out asking the company to issue an apology and cease their campaign, and thankfully, VS changed the title to "A Body For Every Body."

But lingerie brands such as Curvy Kate Lingerie and Dear Kate decided to recreate the campaign using women of all shapes and sizes, representing real body diversity and love. Yay for body positivity!

The hashtag and social media campaign #ImNoAngel by Lane Bryant is aiming to redefine what society considers to be sexy by having women of all sizes submit photos of themselves using a "personal statement of confidence" with the hashtag. The campaign is being run primarily through the plus-size retailer's Tumblr page, which I think is also awesome, considering how much body positivity lives there! Although not everyone has considered the campaign to be a success (since the models featured in LB's initial ad were all generally of the same size), it is getting attention nonetheless, and definitely making waves — which I personally think always indicates a sign of success.

4. The Dove Campaign For Real Beauty

The Dove Campaign for Real Beauty is probably one of the most widely talked about social media campaigns that has ever been created, so how great is it that it lives at the intersection of body image and fashion? What I like the most about Dove's efforts is that they've been going on for over 10 years and haven't just consisted of heart-warming commercials or social media posts — they've been doing real, groundbreaking research about body image! They've used their reports to create their campaigns on self-esteem and inner beauty, which have undoubtedly made an impact in our culture. Their latest effort is #speakbeautiful, in which they encourage women to engage in positive self-talk about their bodies.

This social media campaign was spearheaded by fat activist Virgie Tovar, who has proclaimed that the philosophy behind the movement is to, "Seek to de-center self-hatred and scarcity," or the, "I am never good enough," mindset. Such a mindset is often the central motivator in people's lives, so this campaign aims to re-center self-care and self-love, according to her personal website. Women have started to take photos of themselves on Instagram, reflecting this powerful message and taking proud ownership of their fat bodies.

This has turned into more of a social movement than a specific campaign, but Love Your Body has overtaken the Internet and social media with its message to embrace your figure. Originally started by The National Organization for Women, they designated October 14th to be "Love Your Body Day" in order to take back to the oppressive beauty standards that society holds for women. It's now turned into an activist-fueled movement with advertisements, videos, memes, and more!

7. The What's Underneath Project

This project, started by Style Like U, is meant to redefine the ways in which we see other's bodies, going below the surface in a non-objectifying, beautiful way. In fact, Bustle's own Marie Southard Ospina partook in this powerful campaign, which consists of videos of the subjects talking about themselves and their relationship with their bodies, as they slowly undress.

This hashtag was part of a petition created by eating disorder survivor Erin Treloar, in order to expose the fashion industry's heavy reliance on Photoshop to manufacture their impossibly perfect images and ask magazines to reduce their use of it. Treloar is also the founder and CEO of RAW Beauty Talks, an initiative to encourage girls to find confidence in their bodies. You can sign the petition if you want to talk back to fashion mags — it already has over 4,000 signatures!

This sector of the body positivity movement has become a powerful force on social media websites like Tumblr and Instagram, where proud fat women have taken to the site to post their gorgeous selfies and outfits! The best part of this campaign is that it's grown organically and started a cultural conversation about body image and fashion — because obviously it is possible to love fashion and also be fat! I personally think this movement has led to the turning tides in plus-size fashion, with major retailers now getting on board selling fashionable, trendy clothes for people who happen to be over a size 12.

More like this
Instagram & Facebook May Finally Lift Their Notorious Nudity Ban
By Allie Fasanella
Selena Gomez Dismissed Trolls' Comments About Her Body After The Golden Globes
By Stephanie Topacio Long
The Internet Can’t Get Enough Of Viktor & Rolf's Upside Down Dresses
By El Hunt
Phoebe Dynevor Serves ‘Bridgerton’ Underboob In Stunning Floral Gown
By El Hunt
Get Even More From Bustle — Sign Up For The Newsletter
From hair trends to relationship advice, our daily newsletter has everything you need to sound like a person who’s on TikTok, even if you aren’t.