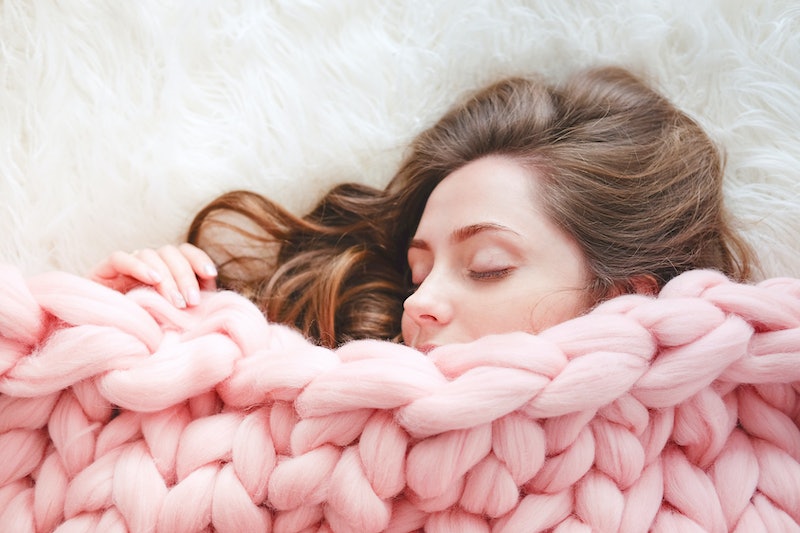 In high school, I used to daydream about mandated nap time — usually right before falling asleep in the back of Spanish class, of course — but deep down, I knew that the chances of school board-approved naps were slim to none. Giving students the chance to catch some Z's in the afternoon might actually have academic benefits: According to recent research, sleep boosts learning. Sorry, kids, but that means your all-nighters are probably doing more harm than good.

Researchers at the University of Geneva assigned 31 volunteers to two groups. One group was allowed to nap for 90 minutes after a period of reward-based learning, while the other had to remain awake. After the waiting period, participants were tested on their recall, and the results will bring joy to the hearts of sleep-lovers everywhere. Volunteers in both groups who received higher rewards did better than those who got lower rewards, but the "sleep" group did better overall. In fact, participants who got to nap even remembered what they learned three months later in a follow-up test, and they were more confident in their answers than those who had to stay awake. If that's not proof that afternoon naps are the greatest activity known to man, I don't know what is.

This is hardly the first time research has pointed to a link between sleep and memory — studies consistently show that sleep is essential to forming memories. In fact, research indicates that sleep affects pretty much every aspect of our lives, from our eating habits to our libido to our decision-making; more importantly, sleep deprivation affects these areas as well. According to the Centers for Disease Control, insufficient sleep is a public health epidemic affecting millions of Americans, nearly a third of whom report getting six hours of sleep or less every night.

Although it's difficult to recover from a sleep debt, naps can at least stave off the exhaustion and fuzzy thinking until you can get to bed for a solid eight hours. Plus, as we've seen, napping is doing yourself a favor in the long term — you'll boost your memory, make more clear-headed decisions, and possibly have a better sex life. Now if you'll excuse me, I have a 2 p.m. date with my pillow.