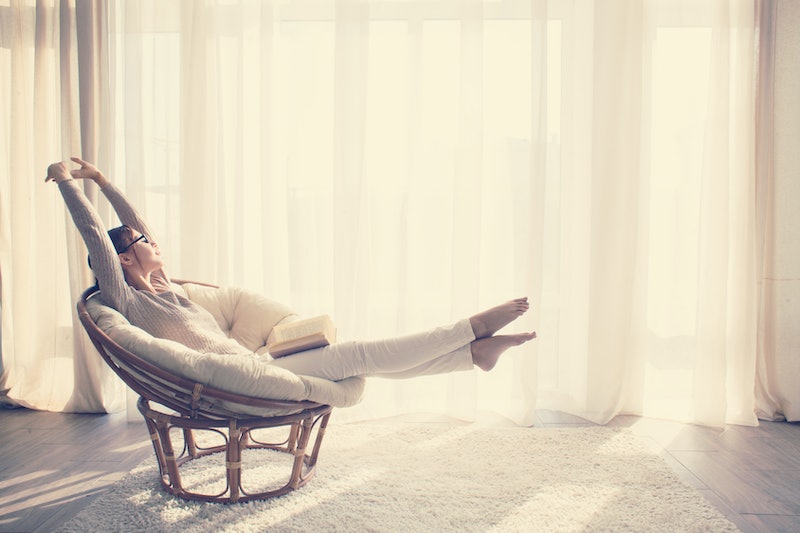 In the past couple of years, people worried about the health effects of a modern lifestyle have grown increasingly concerned that sitting is bad for you. Though that position was supported by research, even newer research suggests that sitting might not be unhealthy after all — at least, not as unhealthy as we previously thought. So, which conclusion should you believe? And how can you act on it?

Scientists from the University of Exeter conducted research using data on more than 5,000 participants who were followed for 16 years to track how much time they spent sitting, standing, and exercising (as well as other lifestyle factors, like diet and smoking habits). Their results, published in the International Journal of Epidemiology, pretty much directly contradict previous findings that a long time spent sitting actively harms your health.

Instead, the Exeter researchers found that none of the five types of sitting measured (total sitting time, sitting at work, sitting during leisure, sitting during television watching, and sitting during non-TV leisure) correlated with mortality risk. In other words, none of these types of sitting coincides with more death, let alone causes it. Differences in mortality amongst the participants were instead easily explained by conventional factor like age and level of exercise. These researchers recommend that people still focus on getting more exercise rather than merely reducing sitting time, since exercise's link to health outcomes is much better established.

So, how much should you be sitting on any given day, all things considered? To my knowledge, there aren't any scientists out there who have found that sitting provides actual health benefits, so it still makes sense not to go out of your way to spend extra time sitting. But the recent findings from the University of Exeter also mean that you don't need to worry very much if it would be difficult to cut large amounts of sitting from your life altogether. For the many of us who park it in a chair behind a computer for hours per day doing "knowledge work," sitting could range from being a minor health danger to dangerous only in that it crowds out the time for actual exercise. But in any case, sitting sure beats the safety record of many other dangerous jobs of the past and present. So if your boss won't fund a treadmill desk, try not to sweat it, because sitting probably won't kill you after all. And fidgeting might counteract any possible negative effects of sitting, so feel free to do a little toe tapping as well.

More like this
6 Abortion Advocates To Follow On TikTok
By Sara Youngblood Gregory
How To Protect Your Digital Privacy If You Need An Abortion Post Roe v. Wade
By Kaitlyn Wylde
Lance Bass Says This Workout Machine Has Changed His Life
By Kaitlyn Wylde
6 Full-Body Tabata Workouts, Straight From Trainers
By Carolyn Steber
Get Even More From Bustle — Sign Up For The Newsletter