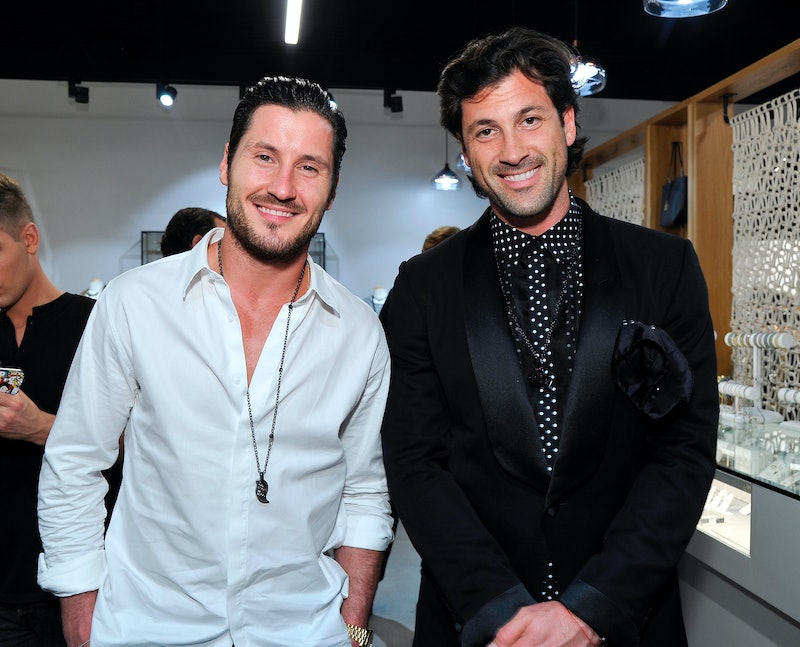 Nostalgic '90s lovers are already beyond excited for Netflix's Fuller House, the sequel series to beloved sitcom Full House. Fans already know several stars are returning for the updated comedy, but there will could be many new faces as well. According to Us Weekly, Dancing With The Stars professional dancers (and brothers) Val and Maksim Chmerkovskiy will join Fuller House as guest stars, and I have a feeling that if the report is true, dancing will be involved. Both Chmerkovskiy brothers will reportedly guest star in an episode as love interests for sisters D.J. (Candace Cameron Bure) and Stephanie (Jodie Sweetin) while they're at a club during a night out.

Update: on Tuesday, a Netflix representative confirmed to Bustle that the brothers will be on Fuller House.

Of course, this reported development implies that D.J. and high school sweetheart Steve (Scott Weinger) sadly won't be reuniting right away, but hey, the road to true love is a long and winding one. Weinger has been on set for the show, so we do know Steve will appear. As for how and when he and D.J. will fall back in love? That's unknown, but here's hoping it happens (I can dream, can't I?). In the meantime, it sounds like D.J. and Steph are living it up as single gals. To get you up to speed, Fuller House will follow D.J. Tanner-Fuller (get it?) as she raises her children with the help of Stephanie and best friend Kimmy Gibbler (Andrea Barber) after the death of her husband. The series will debut on Netflix in 2016.

As for the reported new guest stars, it's actually not as random as it seems. Bure competed on Dancing With The Stars last year and finished third with professional dancer Mark Ballas, but it sounds like she got to know the rest of the dancers well, too. Earlier this summer, Bure posted an Instagram video of her and Val dancing — fans thought it was for a DWTS reunion special, but it could've very well have been for Fuller House, if the report is true.

But that would be some pretty acrobatic dancing for D.J., who is supposed to be pregnant with her third child as the series begins. Perhaps she has already given birth when she hits da club with Stephanie? But then that brings me to what actually happens when they get there — I never thought I'd see dorky, wise-cracking Steph and totally cool D.J. hit up a nightclub, but here we are in 2015. I bet this was all Kimmy's plan, because she always has been the queen of wacky ideas. She probably offered to watch the kids — along with her own teen daughter Ramona, who is probably just as unique as her mom — and encouraged D.J. to go out and test the waters a bit. As for Stephanie, Kimmy maybe just wanted her out of the house — they never really liked each other, remember?

Here's how I think it'd all go down. Once they're at the club, D.J. will likely be shy, but Stephanie will be immediately charmed by two men (the Chmerkovskiys) who claim they are famous dancers. According to Us Weekly, Val will be Stephanie's love interest, so she probably would recruit D.J. to be with Maksim. Instant double date! D.J. will likely be skeptical of their dancing talent, since she's not even really about this club scene. And thus, the Chmerkovskiys decide to prove it to the Tanner sisters by strutting their stuff on the dance floor.

While the appearance of the Chmerkovskiys would make for such a fun episode no matter what happens, I think we all know D.J. was at her best with Steve. I hope those two crazy kids find their way back to each other at some point!