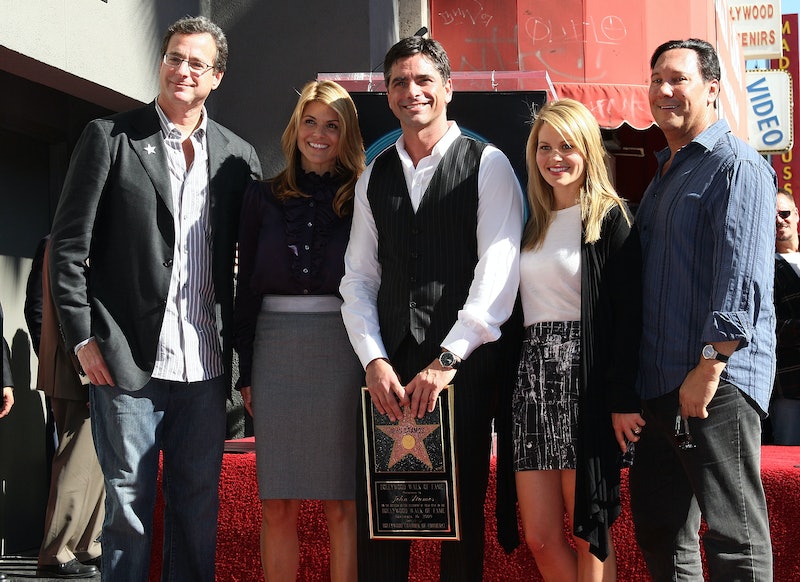 Full House hasn't been on primetime television in almost 19 years (the final episode of the squeaky-clean sitcom aired on May 23, 1995), but the show is still everywhere you look (everywhere you go/There's a face of somebody who needs you!/ Do do do ba ba da!). And on this week's episode of Dancing with the Stars, which has the theme "Most Memorable Year," the show will reportedly have some of Candace Cameron Bure's former Full House co-stars in the audience to cheer her on for something of a mini-reunion. Sources reportedly told E! that "the entire cast has been invited" to cheer her on, but who are we kidding the Olsen twins are not showing up. (They skipped out on the 25th anniversary reunion, so a stop on Dancing with the Stars seems even less likely.)

Earlier this year the men of Full House reunited for both yogurt and Jimmy Fallon, but Monday night might be the most Full House-centric evening of programming since the TGIF lineup.

Over on CBS, Bob Saget will narrate How I Met Your Mother as Future Ted one final time as that series wraps up, but it's ABC that will have a Full House star front and center. (Makes sense, considering the show aired on that network for eight seasons.)

Last week D.J. Tanner herself, Candace Cameron Bure — a top ten competitor on this season of Dancing with the Stars — sent out on Instagram photo of some old friends stopping by her rehearsals: Lori Laughlin and Andrea Barber (better known as Aunt Becky Donaldson-Katsopolis and troublemaking sidekick Kimmy Gibbler).

So while we can pretty much eliminate any hope of seeing an Olsen join Candace Cameron Bure on the dance floor (which is too bad, really), Full House fans can still keep hope alive for these three dream scenarios.

A Live Jesse & the Rippers Performance

Come on, if Jesse & the Rippers can perform for Jimmy Fallon, Uncle Jesse could certainly play "Forever" or the "Full House theme" (though, their cover of "The Hippy Hippy Shake" might be the best to dance to) for his TV niece.

Jodie Sweetin never made it on to Dancing with the Stars, so maybe Candace could do her fictitious little sister a solid and re-enact her truly spectacular dance recital set to Boyz II Men's "Motown Philly"? I mean, that's nostalgia overload, but middle siblings deserve their moment in the spotlight, too.

Sure, ABC's The Wonder Years had all the accolades and prestige, and rightly so (it was a critical darling with three Emmys to its name), but Full House arguably has a more fervent fan base to this day. So, there's really only one place for everyone's first crushes/fictional BFF's D.J. Tanner and Winnie Cooper to settle the score: the dance floor. While securing the rights to use songs from The Wonder Years could prove to be, well, difficult, there's really only one solution: John Stamos covering the equally nostalgia-friendly "Kokomo" by The Beach Boys.