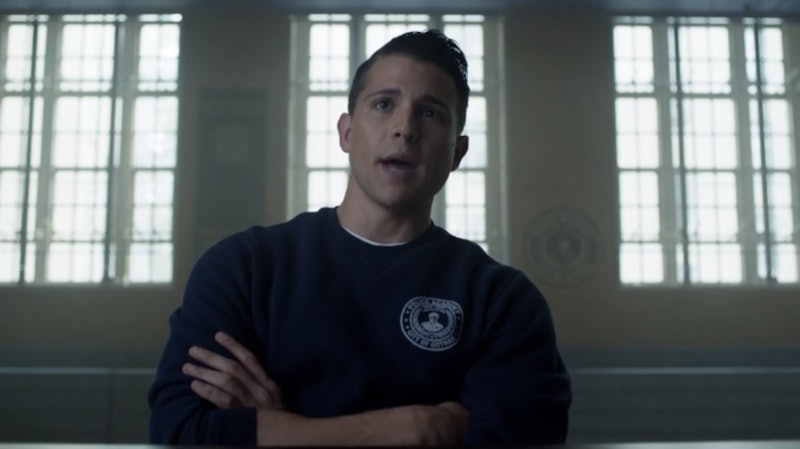 The enemies keep popping up in Gotham, like a dark and gritty game of Whack-A-Mole, and the law enforcement doesn't have a lot of clout in this town. Enter the new captain, Nathaniel Barnes (Michael Chiklis) and Strike Force, his team of un-spoiled cadets. Among the cast of GCPD: The New Class is new Gotham character Luke Garrett, a fresh-faced police hopeful played by actor Lenny Platt. As Gordon, Bullock, and Barnes vetted their possible recruits in the "Strike Force" episode, they solicited their stories on what motivates them to pursue an already dangerous career in a cesspool of a city. This cadet's answer, along with his skills, convinced them that he'll be an asset to the new team. So, who is Luke Garrett?

Luke Garrett isn't a character that comes from DC comic book history, at least not with this exact name. So that gives the audience as little to go on to gauge his trustworthiness as Gordon and his new boss. (But "Strike Force" is a suspicious name for a team of good guys, at least according to DC mythology.) What do fans know about Luke Garrett so far? It's not much, but it's a start. Here's what his debut episode told us about this new Gotham good guy.

In his interview, Garrett mentions a "family business," which implies long-term ties to the city of Gotham. That also speaks to a vested interest in the future of his hometown. A transplant would be more likely to just move on after a family tragedy.

His Father Was Roughed Up By Some Thugs

Garrett's father was jumped and "beaten half to death" by a group of armed muscle who tried to shake him down for "protection money." Corruption is a hallmark of Gotham daily life, but this rookie cop is in the game to protect other honest, working people from the same fate.

He Has A Vendetta Against Organized Crime

The attack on his father wasn't random; Garrett's dad was a target of one of the crime organizations that own the town. (This move smells like the Maroni family to me.) The status quo is one that keeps families like his in fear while the Maronis and the Penguins of the city get rich, trade in power, and occasionally kill each other off.

This is obvious, but bears repeating. Barnes' strategy is to hook the incoming offers from the Gotham Police Academy to the do-gooder side before they're corrupted by one of the many parties who benefit from having police officers in their pockets.

Looking at his file, Barnes accuses Garrett of being "too smart" to be in pursuing a career in law enforcement. His transcripts or scholarships or whatever Barnes sees there didn't dissuade Garrett from taking an active role in peacekeeping. Maybe he'll put those brains to use and be the tactician of the Strike Force.

He & His Fellow Recruits Have A City-Saving Mission

Too bad they have no idea what they're getting into. At the end of the Strike Force's first episode, the recruits are tasked with building a case against Oswald Cobblepot. Little do that know that the Penguin is now operating under Theo Galavan's orders, and the frontrunner for mayor is really pulling the strings.

Will Garrett stay on the good side or be drawn into Gotham's underbelly? The odds aren't in his favor, I'm sorry to say.