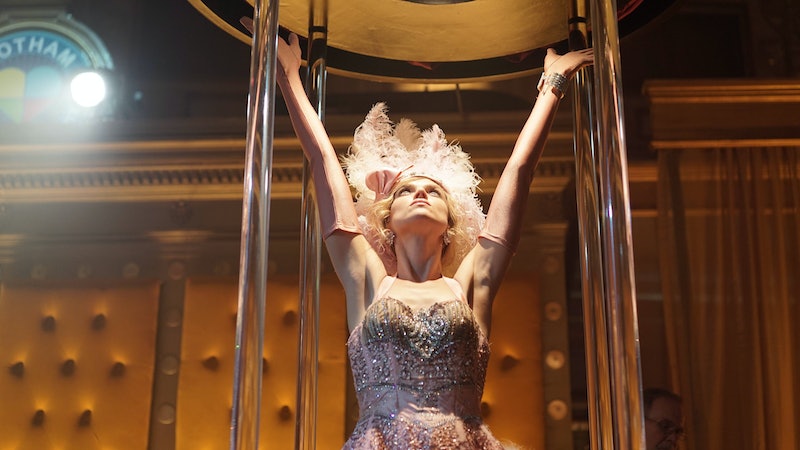 Barbara Kean's evil makeover has been giving me life in Gotham Season 2. After so many episodes where she was relegated to looking sullen and bickering with Jim last season, Barbara's character started to shine when she discovered her "true" self. Under the Ogre's tutelage, Barbara unlocked her inner darkness and killed her parents, an act for which she has no remorse. Negative remorse, actually. Now, she's tangled up with both of the Galavan siblings and an active participant in Theo's forced Gotham renaissance. However, she does take time out of her big-picture super-villain duties to taunt her ex-fiance and threaten his new love, Doctor Leslie Thompkins. Barbara already tried to murder Leslie once, and was unsuccessful. But now she's got a team of escaped Arkham prisoners and the Galavans on her side. Will Barbara kill Leslie on Gotham this season in an effort to pull Jim into the darkness with her?

In the episode "The Last Laugh," Barbara may have hinted at her plan to Leslie, with the medical examiner strapped to Jerome's spinning magician's wheel. "I'm going to make a prediction," she says. "Within a year, Jim and I will be back together. Wanna know why? Because we're both the same. We both have a dark side." Barbara doesn't see why anything she's done since shedding her good girl facade should keep her and Jim apart forever. Something about Jim makes her feel oddly confident that the crusading cop will come around to loving her gleeful murderess. Either she's remarkably deluded (which is possible), or Barbara knows something about Jim Gordon that we don't.

Jim has shown he is willing to do whatever it takes to get the job done; he's one of those people who'd argue that the ends always justify the means. The dark part of him that's been stoked by this lost cause of a city used to worry Barbara, but now she sees it as her chance to win him back. Actress Erin Richards explained to TVLine why she thinks her character is so focused on destroying Jim and Leslie's happiness.

She sees who he really is, so she’s kind of angered that he’s playing this "role," like, "No, I know who you really are, so I’m going to get you back and we’ll go into this dark place together.”

Leslie represents the only life that Jim Gordon has outside of his precinct, besides his brief and scattered visits with Alfred and Bruce. Yanking Leslie away from him would be a shortcut to Jim's dark side. Plus, I'm sure Barbara would jump at the chance to go on another killing spree. In Barbara's eyes, Leslie is keeping Jim tethered to a false version of himself. There's no question that Barbara wants Leslie dead; the question is, how can she (possibly with the help of the Maniax) maximize the potential fallout?

If Barbara does kill Leslie, how far will Jim Gordon fall? And how will he claw his way back to becoming the Batman ally fans know so well? That may be a story for Gotham next season, since this one is all about the villains.