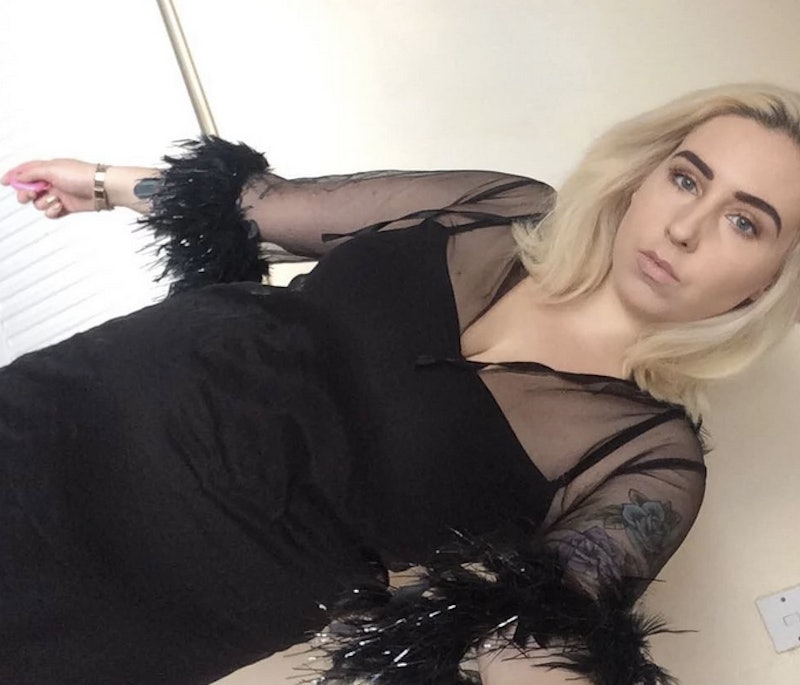 I think that I've managed to go braless with big boobs maybe three times in my life. My ta-tas have never been what you might consider small — a C cup on a 12-year-old meant I was pretty massive compared to my peers, and as a fabulous F-cupped adult, the twins have shown no signs of going anywhere. I used to be ashamed of the size of my jugs, keeping them covered and ignoring the potential power of my own cleavage. But my New Year's resolution for 2015 was to get my tits out more. In doing so, I've learned to love my ladies (and I've also learned about a million different euphemisms for the word "breast").

There's been one final step I've wanted to take when it comes to my self love-orientated breast journey, though: Going braless. When I get home after having been out in the world, the first thing I do — of course — is whip my bra off, and I'm perfectly comfortable with the feeling of my nipples grazing my knees. My big breasts often happily sway away when I'm sat in the comfort of my own apartment, but in the outside world, well, there's a mainstream demand for perkiness that I haven't been comfortable ignoring just yet.

This summer, Bustle's Erin McKelle Fischer wrote a piece entitled "8 Ways To Go Braless When You Have Large Boobs Because Bras Aren't Mandatory For Everyone," and I've since wondered whether any of them would actually work IRL. So I decided to give all the hacks a test run, because bras really aren't mandatory for everyone and I'd love to someday stop feeling like they're mandatory for me.

This look was definitely the one I felt most comfortable in, likely because my breasts were hidden underneath so many layers, which meant my boobs weren't noticeable at all. However, I think if you were wearing this in the winter (because what unnatural ice queen would wear it in the summer?), the addition of a bra would serve as an added layer of armor against the cold. Either way, nobody's going to see your nips when you're wearing four layers of clothing.

This top is usually one of my favorites because the shape really emphasizes my cleavage when I'm wearing a bra. Sans bra, it just emphasizes my lack of natural cleavage. Personally, I'm not really sure if it'd be comfortable enough to sport outside of my bedroom.

3. Tops And Dresses With Slips Or Built-In Linings

As McKelle Fischer noted, wearing a dress with a slip and without a bra means you can't really see the shape of the person's body. Unfortunately, that's kind of my issue with wearing this. I want to see my body and I want to show off how damn good the shape of that body is. I wore this outfit out recently with a bra, and felt much more fabulous.

If hiding the shape of your body so people don't know you're not wearing a bra sounds like your jam, then wearing a slip without a bra will definitely help you achieve that look effortlessly. It's just not what I personally want from an outfit.

The success of this look will completely depend on the type of crop top you're wearing. A loose fit left a whole lot of under-boob on show, which as a big breasted babe I'm just not comfortable with. My tight velvet crop top, however, held my breasts in place with no problems.

I feel that without a bra, this style of shirt just emphasized how braless I was, rather than covering up the fact. In her article, McKelle Fischer suggested wearing a camisole underneath clothing, but I wouldn't ever really want to do that with an adorable cami top like this one. That being said, I definitely see how the addition of a layer (a longline vest, perhaps?) would cover the nips and keep my braless-ness a secret.

Similar to the crop top situation, your choice of bralette will totally influence whether or not you can easily go braless underneath. I definitely think where you're wearing said bralette should decide whether or not you go braless route, though. With Bralette No. 1, I would only ever wear the look on a night out. But jumping around braless is usually not a painless option for big breasted people. Bralette No. 2, on the other hand, is a more daytime-appropriate piece. Due to the shape, I'd feel totally comfortable being braless out and about in it on a warmer autumnal day.

I only really own one sweater, mainly because I hate how shapeless I feel when wearing them. But that's the benefit of going braless under a jumper: The shapelessness will be your friend and a ticket to a comfy, casual look. That being said, if it's cold enough for me to don my only sweater, then it's probably cold enough that I'd need to wear two bras just for the warmth factor.

McKelle Fischer's final tip for going braless with big ta-tas is to just say "eff it." "If you don't care who sees your boobs, rock whatever kind of top you want," she wrote. My insecurities with my breasts have lasted a long time, so maybe my New Year's resolution this year will be to attempt braless-ness more often. After all, anyone who expects big boobs on a plus size gal to be perky has probably never actually seen tits in real life before.

When it comes down to it, some of these styling tips definitely work while others are pretty dependent on other factors (like your destination, your personal style, and how comfortable you are with under-boob visibility). If you're happy to sacrifice some curve-showcasing for comfort, some of the more shapeless styles will definitely assist you in going braless. If you're not, however, then maybe it's not time to let go of the trusty over the shoulder boulder holder just yet.

Either way, I'm glad I have a couple of outfit inspirations for the next time I need to run errands and just can't be bothered to hoist my boobies into a bra for it.