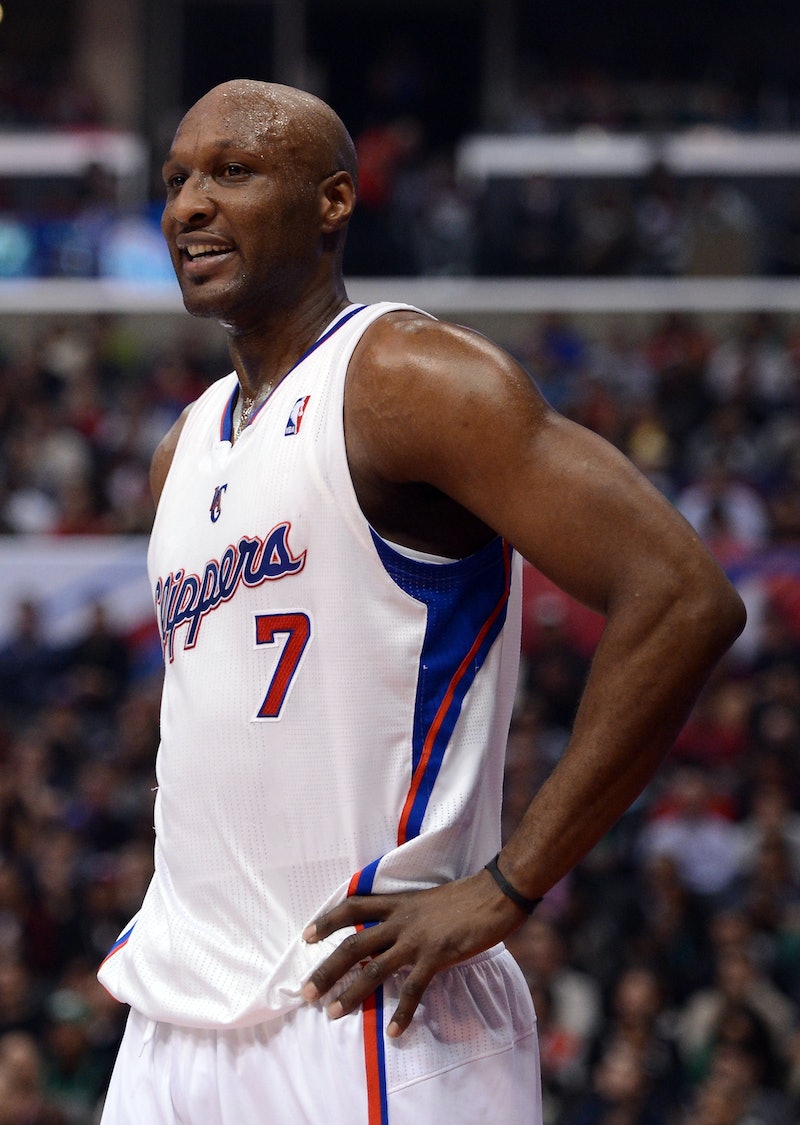 Family members and loved ones have no doubt gone through a harrowing experience ever since Lamar Odom was found unconscious after an alleged drug overdose at a Nevada brothel on Tuesday, Oct. 13. Though initial reports of Odom's condition were grim — he was reportedly in a coma for days and the "prognosis [did] not look good," E! reported at the time — it seems as if Odom is improving. Still, the latest reported updates on the former NBA player's condition are not without their drawbacks, particularly as a TMZ source claims that the basketball player will suffer "permanent" damage on his body from the ordeal.

(Update: On Monday afternoon, Us Weekly reported that, according to a source, Odom will be transferred to a rehab center in Los Angeles. The source claims Odom will "probably be moved this week." Bustle has reached out to Odom's rep for comment on this report.)

(Update: On Monday evening, E! Online reported that Odom was discharged from the Las Vegas hospital and is being transported to a Los Angeles hospital for further treatment).

That being said, the fact that the 35-year-old now seems more likely to survive — and has reportedly been showing steady signs of improvement, like waking up from his coma, breathing, and swallowing on his own, and being able to communicate — is an enormous relief, to say the absolute least. And the Kardashian-Jenner family certainly believes in the power of prayer, as family members all rallied around Odom both in person and on social media, sharing photos of themselves with him and urging fans to pray for his well-being. In addition to the Kardashian support (estranged wife Khloé Kardashian has reportedly been sitting vigil at Odom's bedside since he was hospitalized), Odom's children, mother of his children, and father have all reportedly been at his side and praying for his recovery.

On Wednesday, Oct. 14, Odom's rep released a statement to Us Weekly, which reads: "Family and friends are extremely concerned for Lamar... please don't listen to the false information being circulated unofficially. Please respect the family's privacy during this difficult time." Bustle has reached out to Odom's rep on the latest claims, but has not yet heard back.

Here are the newest updates on the two-time NBA champ's condition as of Monday, Oct. 19.

He Will Reportedly Survive

TMZ reports that Odom will "survive his near death experience." But the site also claims this won't be without its immense challenges. The basketball player will reportedly undergo months of rehab, including seeing physical, speech, and various other therapists during his recovery.

Reportedly, Some Damage Will Be Permanent

According to TMZ, an "undetermined amount of damage to his body will be permanent." E! reports that doctors are still assessing any possible brain damage or other effects from the alleged overdose.

He Reportedly Remains On Dialysis

E! reports that due to kidney failure from his alleged overdose, Odom is on dialysis.

After reports emerged that Odom was no longer on a ventilator and was able to breathe on his own, paparazzi photographed the basketball player's father smiling outside of the hospital where his son is staying.

There Is Speculation That Odom & Khloé Kardashian Will Get Back Together

It makes sense that people are wondering if the estranged spouses will reunite romantically, as Kardashian has reportedly been at Odom's bedside since he was hospitalized and, according to E!, a judge has yet to sign their divorce papers. But it is entirely too soon — and frankly, a little disrespectful — to say.

His Aunt Released Another Statement

Lamar has always been blessed with a tenacious, fighting spirit, overcoming insurmountable obstacles to achieve the impossible. These past few days have been no different. He is defying the odds in his toughest battle to date with GOD's grace. Each day Lamar is getting stronger and reaching significant milestones in his recovery. We are committed to remaining by his side as a family for our champion, who we love immensely. Your continued prayers and well wishes have been the fuel to keep us going, and for that we are eternally grateful.

Thoughts, prayers, and positive energy to Lamar Odom during his recovery.