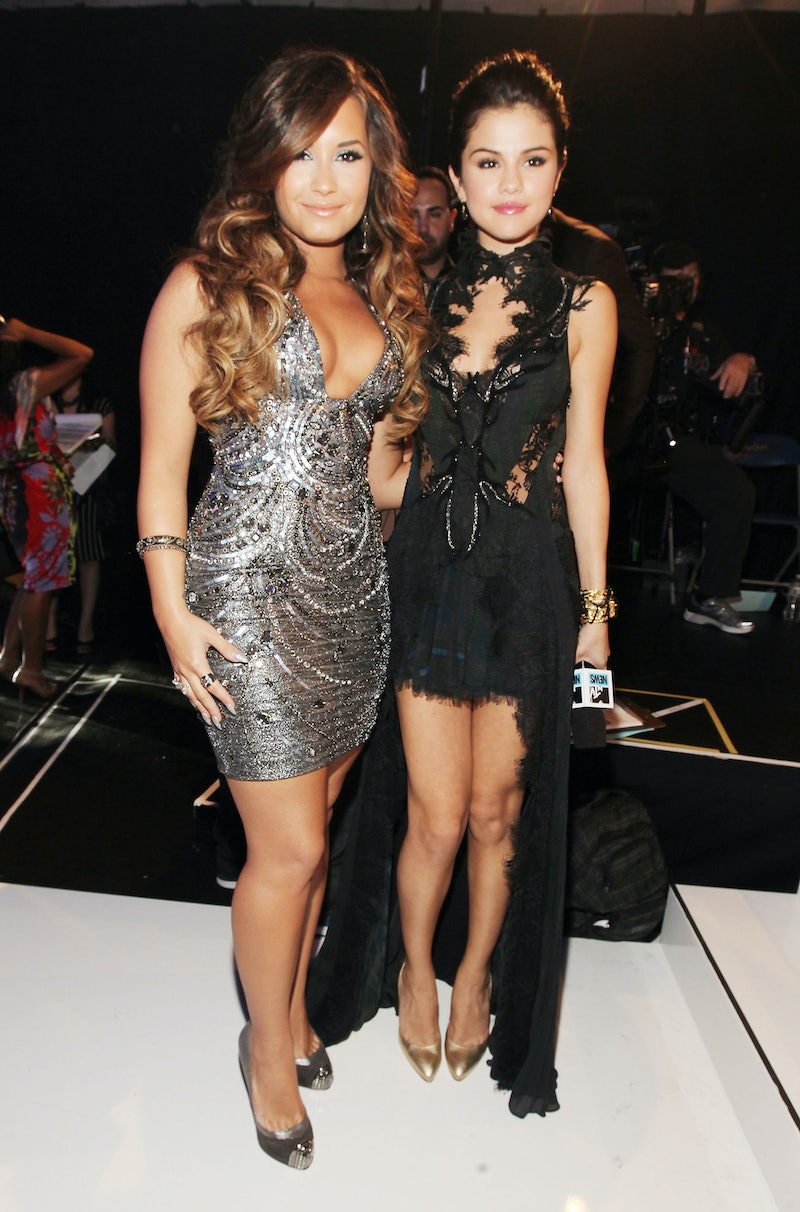 Of every celeb best friendship, few are more legendary than the one between Demi Lovato and Selena Gomez. From the time they starred on Barney together all the way into 2015, their friendship has stayed intact — even if they have suffered a few bumps along the way. Although the jury's always out on where Gomez and Lovato stand as BFFs from week to week, the "Same Old Love" singer has officially set the record straight. While appearing on Watch What Happens Live on Sunday night, Gomez announced that she and Lovato are still friends. Don't panic, guys! Everything's fine.

And Gomez also confirmed something very important: Her friendship with Taylor Swift hasn't gotten in the way of what she has with Lovato. Awhile back, it looked like Gomez and Lovato were estranged because the 23-year-old had gotten super close with Swift (hence the "ask Taylor" drama of 2010) but if you really want to know, that has nothing to do with any problems Gomez and Lovato might have had... if those problems even existed.

"You're kids, you know what I mean?" Gomez said in reference to the days they spent hanging out with that big purple dinosaur. "You grow up together."

Need more proof that Gomez and Lovato's friendship has survived the test of time — and, more importantly, the test of Taylor Swift? There's plenty.

They Still Take Selfies Together

Of course, when Lovato shared this one, it was the first photo of them together that had surfaced in awhile. Does that mean they haven't been hanging out, though? No, absolutely not. If celebrities can hide romantic relationships for months, certainly a pair of BFFs can spend time together without the world finding out.

Gomez Still Considers Lovato One Of Her Closest Confidantes

When Gomez talked about the pressure of getting hate with Extra last month, she named Lovato as one of her go-to pals.

"And then you have people like Taylor or Demi or anyone that you're able to look in the eye and go, 'My gosh, this hurts, I don't understand this. Why are people like this?'" she said. "And they get it.”

They Still Hang Out At Events Together

Last year, Gomez and Lovato buddied up at an event where they were honored for how they give back ... including a speech from Gomez about how Lovato inspires her to do good. If that's not friendship, I don't know what is.

It's good to know that Swift hasn't gotten in the way of a lifelong friendship, but let's be real — there's plenty of room in her squad for everyone. You know who would have looked super badass in the "Bad Blood" video? Demi Lovato. Just saying, Swift. For next time.