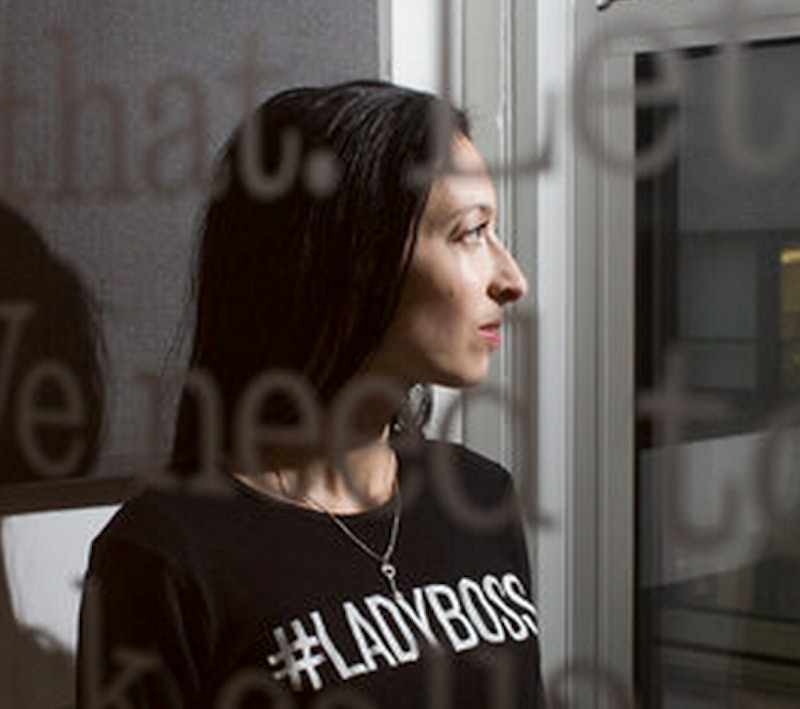 When you combine the lack of women in the tech industry with the paucity of women holding leadership roles at companies of all sorts, the chances for women to assume executive positions at tech companies can look bleak. Only 14.2 percent of top executives at S&P 500 companies are women, and women constituted only 26 percent of people in computer and mathematical occupations in 2013. Our cultural bias against women in power starts taking effect early in childhood, with both boys and girls being less likely to support a girl-run student council, according to some reports.

The careers of individuals who have risen to the top of their companies or started their own despite prejudices against women leaders and gender discrimination in STEM fields, however, tell a more encouraging story. I spoke with eight of these women to learn how they've overcome some major hurdles to women in leadership, particularly in the tech industry, and what they view as the key to helping more women achieve the same status. The good news is, these founders and CEOs are thinking deeply about how to pave the way for other women after them, meaning that for every woman tech executive we gain, we are really gaining much more. Take it from these leaders who have experienced women's ability to succeed firsthand.

MOGUL is a digital platform for women around the globe — nearly 200 countries regularly visit the site — to share articles, post and find jobs, answer questions, and more. Tiffany Pham, MOGUL's founder and CEO, told me that in addition to being entirely led by women, her company must work harder to gain credibility because its product is geared toward women. In order to impress investors, she said, she taught herself to code so that she could fully build the platform in advance of fundraising. "Then, when we launched, we launched to about a million unique users, and I was able to subsequently let our numbers speak for themselves," she said. But given the niche that MOGUL is filling, its women-dominated team also gives it an advantage: "We understand our users: female millennials. As a female-led company, we understand our own needs and thus our users' needs." She encourages companies to hire a gender-balanced workforce at all levels including management to create the "supportive and nurturing culture" that she has been able to maintain.

Enplug, which makes software for digital displays in stores, hotels, and stadiums (think of those live social media feeds you sometimes see on walls at events), has an entirely female leadership team, including the CTO, Head of Sales, Head of People and Culture, Head of Web Design, and CEO Nanxi Liu. Liu told me that this gender breakdown has made her company more sensitive to diversity issues: "The women leaders at our company have all experienced prejudice in the workplace in the past. As a result, we are acutely cognizant about treating our own teammates fairly." While many companies offer lip service to diversity in tech, Liu has some concrete tips to cultivate a welcoming environment, including setting objective compensation guidelines to ensure everyone gets paid equally for the same level of contribution and requiring at least half of finalists for each job position to be women. She also has a great comeback for colleagues who assume she lacks technical skills:

I've often been asked, "How do you start a software company without a technical background?" to which I answer, "I started coding in middle school."

Alicia Navarro started coding at age nine, studied computer science, and worked as a business analyst, business consultant, and product manager before founding Skimlinks, which lets publishers track clicks and purchases that result from links on their websites. Navarro pointed out that while there are efforts afoot to get more women into computer science, it's also important to teach women that they can use these skills in more than one way — including in management. "If we want more women in management roles, encourage more women into technology in schools, and demonstrate that being in technology does not only mean you'll be a coder all your career," she said, adding that there are many "creative, international, dynamic careers that perhaps young women aren't aware are possibilities when they are deciding their vocational futures."

Cheryl Rosner founded Stayful, a site for travelers to find, book, and negotiate prices for hotel rooms, based on her experience working at travel companies like Hotels.com and frustrations with the hotel industry that many of us can relate to. She told me she has been called names for speaking out against gender bias in the workplace, but it's better than staying silent. She credits her ability to thrive as a woman founder and CEO in part to a supportive team of investors and advisors. If you want to help other women succeed, she said, "Be a mentor and take an active role in supporting people with potential to help them achieve leadership roles. It takes effort and sometimes courage to speak up and be heard. We just need to keep at it until one day it will no longer be a topic of conversation." And when sexism is getting women down, she said, it helps to remember what motivated them to pursue their careers in the first place and keep sight of these goals.

Yvonne Lin, along with Tara Marchionna and Andrea Floren, founded smart toys company Wondernik to "bridge the big pink and blue divide in the toy section." As a kid, she explained, she loved to build things and to make art; however, she had trouble finding toys that combined these two activities, since the former is typically designated as "for boys" while the latter is more often marketed to girls. While any kid who has used arts and crafts kits knows they can be a ton of fun, "they teach pre-1800 technology, like knitting, crocheting, and beading, which we think is limiting," she said. In the meantime, boys' toys "make it easy to build messy gadgets, robots, or cars — and hard to build anything else. Many girls don’t want to be limited like this. This means that STEM toys end up being considered boys' toys." So, Wondernik's first products are nightlight houses, talking stuffed animals, and animatronic tails, which combine both categories. Lin said many women with technology backgrounds have other backgrounds as well — in her case, both engineering and fine art — which can compliment their technical skills, and that women may also think more about the social impact of their products.

To encourage women and girls interested in technology, Lin gives three main pieces of advice: Tell girls STEM stories about things they care about to demonstrate all the exciting ways they can apply knowledge of science and technology; hire women and view their often-diverse interests as a strength rather than a sign that they lack direction; and value women's contributions, especially when they ask about the reasons behind decisions and the impact of the technology, rather than viewing the lone woman in the company as a trouble-maker.

Neha Sampat serves as CEO of Built.io, a software company that provides tools for mobile app development, a content management system, and an API platform to connect individuals and businesses. While she often sees her technical expertise questioned more than a man would, Sampat said her gender has also given her more visibility and led her to hire a more diverse team. "I constantly hire people with non-traditional backgrounds because I believe that greatness is born from diversity of thought," she said. "Women don’t need special treatment — we just need to be on a level playing field." To level this playing field, Sampat suggests providing more funding to women entrepreneurs, educating people about gender bias, and training girls to become leaders — a cause she has advanced through her own “Junior Executives” program. She also warns against getting tired of talking about this issue:

I am weary that “Women in Tech/STEM” or “Women in Leadership” is a trendy topic. I would encourage everyone to not “get bored” by this topic. Let’s not forget that we have a long way to go.

As CEO of Full Circle Insights, which provides metrics on marketing campaigns, Bonnie Crater often finds herself "one of one or two women among 100 men in the room" at CEO meetings — and makes sure that her own company is more balanced. "Gender in leadership often reflects the composition of teams," she explained. "At Full Circle, 46 percent of our employees are women." To improve gender ratios at tech companies, Crater advocates a variation of the "Rooney Rule," which requires the NFL to interview minority candidates for coaching and senior operations roles. "When a company has a senior position open, they should consider at least one or two female candidates," she said. "If it works for the NFL, it can work for Silicon Valley."

In addition to leading JeKuDo Privacy Company, which provides a secure messaging service similar to Slack, Elissa Shevinsky is a co-organizer of the web security conference SecretCon and editor of the book Lean Out: The Struggle for Gender Equality in Tech and Start-up Culture. How does she do it all? "It's hard for all new founders, and women face their own set of challenges. When I first became a CEO, I was still very unproven. It was hard for me to find good collaborators," she said. "My advice to young women getting into startups is to just level up as fast as you can. Find a way to become an expert, and to get yourself noticed. Find mentors that you can trust." Another way to advance women in tech is to have "more women investors and more women entrepreneurs," she added. "That's how you get women in the boardroom."