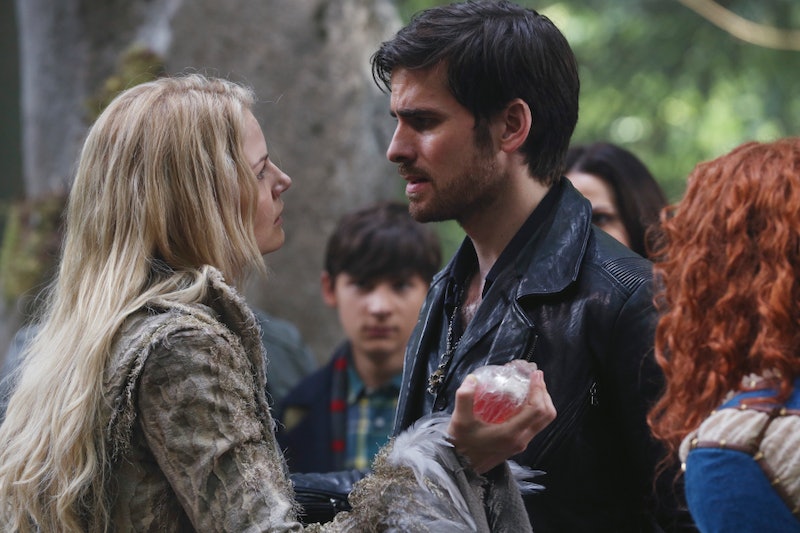 Forget everything you thought you knew about Once Upon a Time Season 5, because in light of recent photos taken from the set, this fairytale series is gearing up to turn everything on its head. In the images, we see Mr. Gold standing alongside Hook, who is holding a very familiar-looking sharp object — the Dark One dagger. But instead of just seeing Emma Swarm's name carved into the engraving, we also find two other game-changing words alongside it: Killian Jones. So what does this mean exactly? At first glance, one might wonder if this means Hook will become the new Dark One eventually — deciding to make the ultimate sacrifice in order to free Emma from her villainous fate. But I think there's a much bigger story twist at play here. I think Hook will be the hero to pull Excalibur from the stone.

Let me explain… the Dark Swan is in need of a hero if she ever hopes to get that sword re-pulled from the stone. And while we now know that her initial plan is to craft a hero out of this "clean slate" version of Rumpelstiltskin, I'm wondering if he isn't the one destined to wield Excalibur as his own. That destiny may belong to our oh-so dreamy pirate.

After all, it's not as though Emma's name has been removed from the sword. If you look close enough, you can make it out in a few of the images. No, Killian's name is located on the upper-portion of the sword — not the dagger itself, which implies that his role in all of this will be completely separate from Emma's. He's not the Dark One, he's the one that will banish the darkness forever. Let's just hope that doesn't mean Emma will have to be banished along with it.

Many viewers (myself included) worried that Emma's journey to darkness would also lure Hook back to the side of villainy. But so far this season, this former swashbuckler has risen above such temptations and even gone so far as to reject Emma's advances since she's no longer the woman he fell in love with. So really, it would make perfect sense for him to be named as Excalibur's true hero, because that's exactly what he's become.

But at the same time, we shouldn't forget what series we're dealing with here. Once Upon a Time is known for using magic and illusions to throw us off base. For all we know, these images are all apart of some fantasy or alternate reality of what could be. Maybe Emma even has a nightmare that Hook will be the one to take her down. Nothing can be taken as fact, especially when magic is involved. But if these photos really aren't just apart of some magical trickery, then I'd say we could be looking at OUAT's newest hero that will free Merlin, save Emma, and (hopefully) banish the darkness for good.