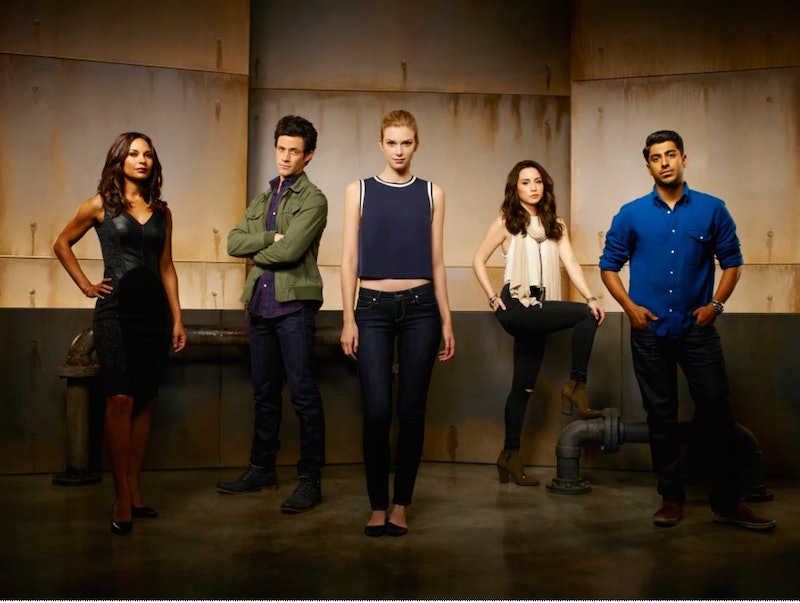 When it comes to finding out spoilers for Season 2 of Stitchers , we all know what's most important, pressing issue to resolve: Was Cameron revived or is he officially dead? Now, it seems unlikely that the show would kill off its male lead, especially right as Kirsten discovered that Cameron was in love with her, but there is always more to the story than meets the eye and there are many more mysteries the show has to reveal fully that could sustain the series even if Cameron's death sticks. Bustle caught up with the cast of Stitchers at New York Comic Con and got a chance to find out little tidbits about what is to come for Season 2. Of course, the actors couldn't say too much but the biggest change between seasons seems to be the shift in tone.

Pretty much every cast member stated that Season 2 would be darker than its predecessor, and that makes total sense. For one, we now know just how Kirsten developed her stitching abilities and the terrible consequences of her first stitch. Plus, there is still so much we don't know about Kirsten's father, the Stitchers program in general, and, of course, Maggie, particularly where her loyalties might lie. And, let's not forget that Linus and Camille's romance could be on hold thanks to tension at work. That's a lot of drama for Season 2 to handle, so it's understandable the tone would shift a bit. So, what could the cast tell us?

During the New York Comic Con panel, actress Salli Richardson-Whitfield teased that Maggie could be turn out to be a bad guy or a good guy. But, what does that mean for Season 2? And, how might Maggie be affected by Cameron's outcome, whether positive or negative? For one, both Richardson-Whitfield and Damon Dayoub, who plays Fisher on the series, feel their characters have obligation to their job, but also to the protection of these kids with whom they work on a regular basis.

"She may have just been about the job and now she cares about them," Richardson-Whitfield explained. "And she doesn’t want anything to happen to them, and that’s where maybe you’ve been given an assignment of what you’re supposed to do. But, now you know that’s going to hurt the people you work with, and now you’re battling to protect them. So, I think that’s part of how do I do my job and do my mission."

As for Emma Ishta and Kyle Harris, who play Kirsten and Cameron respectively, there was even less they could say about their characters. Well, Kyle Harris especially. Considering how little Harris could say about his own future on the show, he did offer some suggestions of things he personally hopes to see as Season 2 premieres and progresses, especially regarding Maggie and newly-promoted series regular Damon Dayoub as Fisher, as well as the backstories for the characters.

"We have Fisher onboard as a regular this season, I think there’s that whole treaded territory. What his backstory is and how this is now affecting his life," Harris said. "And, seeing about Maggie and knowing where she stands in all this. Is she a good guy? Is she a bad guy? You know. And, we know that she loves and nurtures us like we’re her own children... I’ve heard that there will be episodes this season that we’ll learn a lot of backstory ... like the whole episode will be a flashback episode of how each individual character found their way to this program."

Perhaps that means that even if Cameron dies, we could still see Kyle Harris on the series and find out just how Cameron came to join the Stitchers program? A girl can only hope and attempt to find the silver lining, even in the worst possible scenarios. So, here's what information Bustle was able to get from the cast in terms of Season 2. "Bigger. Badder. Sexier. Slicker," Allison Scagliotti, aka Camille, said.

"Darker. More mature both as a show and as the characters as whole," Ritesh Rajan, aka Linus, added. "We’re going to pick up right where we left off. So, I think the events at the end of Season 1 definitely will take a heavy toll on everybody in terms of what are we doing at the program."

Of course, Rajan means Cameron's potential death. What happens in the aftermath of Cameron's death or revival is going to change so much about the day-to-day activities of the Stitchers gang. Rajan opened up about what that could mean for the show and its characters:

We go through this kind of — I don’t want to say mundane — but a day-to-day dealing with these dead patients which kind of looses it’s luster. We forget that we’re dealing with human lives, but finally what happens with Cameron kind of hits home. And, it’s like, "Wait a second, we are actually dealing with human life and we’re making a difference in these people’s lives." So, kind of reflecting back on when we have Cameron in the corpse casket, I think it causes Linus to definitely kind of look at himself and see maybe it’s time to grow up and figure out what is he doing with his life. Why is he living at home with his parents still? He’s coming to work and doing important work, and definitely it affects the relationship with the rest of the community.

And, how does all of this affect Camille and Linus relationship? Scagliotti gave a small tease regarding arguably the best romance of Season 1.

I think it just causes us both to reevaluate and recalibrate. Like Ritesh was saying, Linus was inspired to do some growing up and reorder his life. And, Camille, this is the single most dire situation she’s ever been in in her life... And, I think in the aftermath of that, she feels wholly unprepared to go. So, she pulls away emotionally and seeks fight training from Fisher. So, I’m hoping for Camille to potentially become the muscle of the force since we don’t really have that yet.

Camille certainly has the attitude and spunk to be the muscle of the group, as long as her training with Fisher goes well.

But, what about Kirsten? Emma Ishta wasn't very forthcoming with information about Kirsten in Season 2, aside from hinting that we might learn more history regarding her parents, especially, or rather, hopefully more about her mother in particular.

So, for now, we'll just have to keep our fingers crossed for Cameron's outcome in the Season 2 premiere. Seems we'll find out the answer to that big cliffhanger right away, but there are so many more secrets to unfold, especially with Kirsten's family and Maggie's past and present. Stitchers is a show filled with mystery, and there's certainly going to be even more when the show returns.