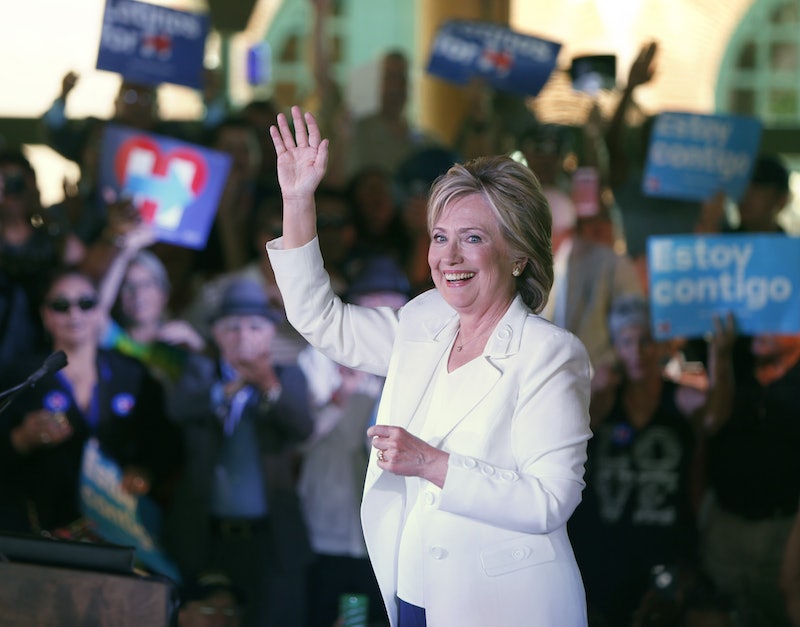 In today's edition of "proof that the next generation is shaping up to be awesome," a self-identified "little feminist" recently sent an adorable letter to Hillary Clinton. As is the case with most other feminists, the thought of a female President has the preteen, who writes that her name is Olivia, all aflutter — and, in fact, she's so excited by the prospect that she kindly included an offer to volunteer with Clinton's campaign after school in the letter. I can't decide whether to cry "YAAAAS" at the top of my lungs or say "awwwww" for twenty minutes, so I offer this compromise: "Yawwwww."

Hm. That doesn't quite have the effect I was going for, but you get the idea.

The letter was posted to Clinton's campaign website, where they introduced Olivia as a "12-year-old feminist who wants to grow up in a world where women are treated equally." In the letter, the preteen explains that she has two dads, a twin brother, and learning disabilities that require her to attend a special school for children like herself. Like many students these days, Olivia is concerned with the growing cost of education.

"The school is fairly expensive and I wish that there were more public schools that can help kids with dyslexia like me," she writes. Same, Olivia.

She goes on to say that she's a "huge fan" of Clinton, who recently addressed concerns surrounding the skyrocketing cost of college tuition with a plan for reform. Perhaps most importantly, Olivia highlights the impact a female President could have on future generations. "I am a little feminist growing up to help all women with equal rights. I hope you can be the first woman President of the whole United States!" she writes.

No matter what your political leanings may be, there's no denying that Clinton's campaign has been a huge step forward for feminism, allowing little girls across the country to grow up knowing that they, too, can run for President one day.

Read the letter in full below, and head on over to Clinton's campaign website to see it in all its handwritten glory.

My name is Olivia [redacted] and I am 12 years old. I have two dads named [redacted] and [redacted]. I also have a twin brother named Spencer [redacted]. I go to a school called Mary McDowell Friends School. The school is for kids with learning disabilities, I have dyslexia and ADHD which stands for Attention-Deficit-Hyperactivity Disorder. The school is fairly expensive and I wish that there were more public schools that can help kids with dyslexia like me. My school is in Brooklyn so I would be completely willing to help you out after school. I bet I would be the youngest member of your campaign.

I am a huge fan of yours, and I really hope you become President. I am a little feminist growing up to help all women with equal rights. I hope you can be the first woman President of the United States! By the way I'm really glad that there is now gay marriage legal all around the whole 50 states of America!

As much as older generations love to heap disdain on young people for perceived detachment from society, Olivia's letter is a clear indicator that they're just as engaged as everyone else. (Duh.)

Clinton responded on her website, thanking Olivia for her kind words. "Please know that I join your dads in cheering you on for great success. Keep up the great work, always care deeply about what you believe in, and never stop reaching for the stars!" she wrote.

Did you hear that sound? That was my cold, cynical feminist heart growing three sizes. No biggie.