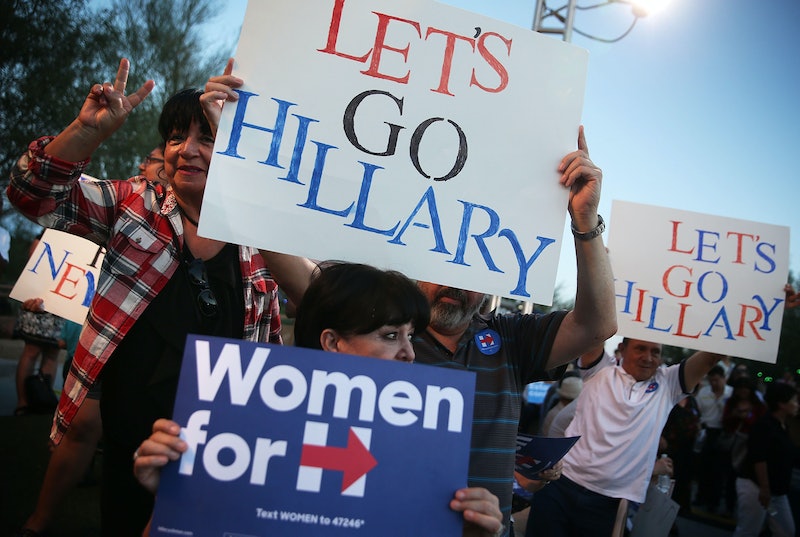 We all want world peace and a stable economy, and it's safe to say that even the 20-plus candidates for president can agree on that much. When it comes to issues like equal pay and reproductive rights, though, the candidates — and voters — tend to diverge greatly. When attack ads begin to circulate and the debate stage runs amok, it can be hard to separate the good guys from the bad guys, the ones who are on your side of divisive issues from the ones who might just pretend to be on your side. While these issues are extremely complex, there's at least one thing every feminist should know about each candidate.

Which candidate actually practices equal pay for women and men? Which candidate wants to give parents 12 weeks of family leave after having a baby? It's easy enough to think along partisan lines (i.e., Republicans tend to shy away from women's issues and Democrats tend to champion them), but in the case of some of the 2016 candidates, that sort of thinking doesn't tell the full story. It's more important to look at what the candidates have actually done and said about these issues — and some of those facts might surprise you.

Hillary Clinton is probably the candidate most associated with women's issues — and with good reason. She's often known for her powerful and memorable quotes about women's rights. But even outside of her political career, Clinton has worked to address the role of women around the world. In 2013, she launched an initiative called "No Ceilings: The Full Participation Project" through the Bill, Hillary, and Chelsea Clinton Foundation. The initiative focuses on providing data and research about the status of women around the world. For instance, the initiative's research has reported that one in four girls was married before her 18th birthday and that the United States is one of only nine countries that does not require paid maternity leave.

Unlike Clinton, Donald Trump gets a bad reputation for his statements about women — and from his statements alone, he deserves it. But his daughter Ivanka has repeatedly come to his rescue, touting her father's business practices as proof of his respect for women. Surprisingly, Trump's companies employ more female executives than male, and his female employees actually tend to make more than their male counterparts, according to his attorney. When it comes to women's issues, let's hope Trump's actions speak louder than his words.

As a Republican-turned-Independent-turned-Democrat, Lincoln Chafee has sat on both sides of the aisle and in the middle. When it comes to reproductive health, he is unwavering in his belief that regulation belongs at the federal level. "If it's left to the states, then only wealthy women will have access to abortions, if they have the resources to travel, whereas poor women would have to resort to the old days of difficult decisions," Chafee has said.

Democratic candidate Martin O'Malley is Catholic — he even attended the Catholic University of America — but his views on women's health issues are quite contrary to the Church. He supports access to abortion, funding for Planned Parenthood, and other related issues. As governor of Maryland, he signed the Maryland Parental Leave Act, which requires the state's small businesses to offer employees at least six weeks of unpaid family leave following the birth of a child.

In 2013, Planned Parenthood labeled one of Senator Lindsey Graham's quotes the "Worst Quote of the Year." The quote?

If we can convince the American people to provide assistance and prevent abortions at the 20th week, nothing bad is going to happen. Good things will happen.

Graham was speaking in support of a bill he sponsored in the Senate that would ban abortions after 20 weeks.

Bernie Sanders supports women's issues across the board, but his stance on paid family leave is particularly noteworthy. His platform includes a plan to offer new parents up to 12 weeks of paid family leave. Such a plan would put the United States on par with other developed countries.

A conservative, Marco Rubio is often seen as problematic for the advancement of women's issues. Like Sanders, though, Rubio has a plan for paid family leave. He would offer a tax credit to businesses to encourage them to offer at least four weeks of paid leave following the birth of an employee's child.

Ted Cruz is conservative through and through, at least when it comes to women's issues (after all, he supports a sweeping ban on all abortions). Interestingly enough, though, he grew up with quite an empowering female role model. His mother went to college despite her father's objections, and she refused to learn to type, so that she wouldn't be mindlessly shuffled into a secretarial role. It's a compelling story, but it's probably not enough to get around Cruz's platform.

Carly Fiorina supports feminism in a conservative way. Her history in the business world has largely shaped her current dialogue on sexism. In fact, she wrote in her book Tough Choices about a time early in her career — she was still in a cubicle — when her male colleagues chose to hold a meeting at a strip club. She was uninvited from the meeting when the location was chosen, but she went anyway to prove that she should be taken seriously.

Ben Carson once talked a woman out of having an abortion at 33 weeks pregnant. She had planned to get an abortion because her baby had been diagnosed with hydrocephalus, a rare build-up of fluid in the brain. Carson successfully treated the baby's condition after birth. This story reflects his pro-life stance on abortion, but it seems that he is pragmatically so. He has also referred women to doctors who perform abortions during his medical career.

Most Republican candidates don't treat Democratic competitor Clinton very nicely, but Rand Paul might have crossed a line in his attacks. Several months ago, he created a parody Pinterest account for Clinton and included a board for a White House remodel and one for Valentine's Day. (Pinterest has since deleted the sexist board.) Focus on politics, Rand, not sexism, please.

So maybe this is two facts, but oh, well: New Jersey Gov. Chris Christie has used birth control and he has donated to Planned Parenthood. Granted, he has also voiced support of defunding Planned Parenthood because he does not support abortion. Overall, he tends to focus more on fiscal issues than social issues, most likely because he's more moderate than many of his conservative contenders.

Kim Davis' No. 1 fan, aka Mike Huckabee, is known for some cringe-worthy quotes about women's issues. In 2011, he gave a radio interview, in which he criticized actress Natalie Portman and her supporters for glamorizing pregnancies out of wedlock.

John Kasich, long-standing governor of Ohio, has signed 16 anti-abortion measures into law during his tenure in the state government. One such measure requires women who want an abortion to get an ultrasound before having the procedure.

The former governor of Virginia, Republican Jim Gilmore is pro-life with an indication that he's willing to compromise. In a 2007 interview on CNN, Gilmore said that although abortion before eight weeks is not OK, "the question is should the law prohibit it at that point? And I've never taken that position." The eight weeks designation may be a little outdated, as nowadays we're more concerned with a 20-week deadline.

Another Republican governor, another pro-lifer: Bobby Jindal once compared women seeking abortions to criminals. In 2011, while advocating for "informed consent" legislation, Jindal said:

We already make sure criminals know their rights. Before police arrest someone they inform them of all their rights under the law, so it’s only common sense that we would do the same for women before they get an abortion.

When former Sen. Jim Webb isn't complaining about his lack of air time at the Democratic debate, he's supporting women's reproductive rights. He hasn't necessarily said much about these issues lately, but back in 2006, he said that "the power of the government ends at my front door unless there is a compelling reason to come inside." Hopefully, Webb's definition of a right to privacy includes a woman's right to have an abortion.

George Pataki, a Republican, supports Roe v. Wade. Due to his Catholic beliefs, Pataki has said that he is "appalled" by abortion — he has even cited those sketchy undercover Planned Parenthood videos that Republicans have talked a lot about lately — but that he believes Roe v. Wade should remain the law of the land.

There's no good news here. Rick Santorum doesn't support the use of contraception, he doesn't support abortion for any reason, and he doesn't seem willing to compromise in the slightest. In fact, he has said that the Social Security system is messed up because there aren't enough young people in America to support it... because a third of America's young people have been aborted during pregnancy. Yikes.

When it comes to women's issues, some candidates say problematic things, while others do great things. It's important to remember that one fact can't necessarily sum up a candidate's views on a complex issue like abortion or paid parental leave. Still, this quick sheet gives a solid glimpse into their track record, and women's issues are something we can't ignore in the 2016 election.