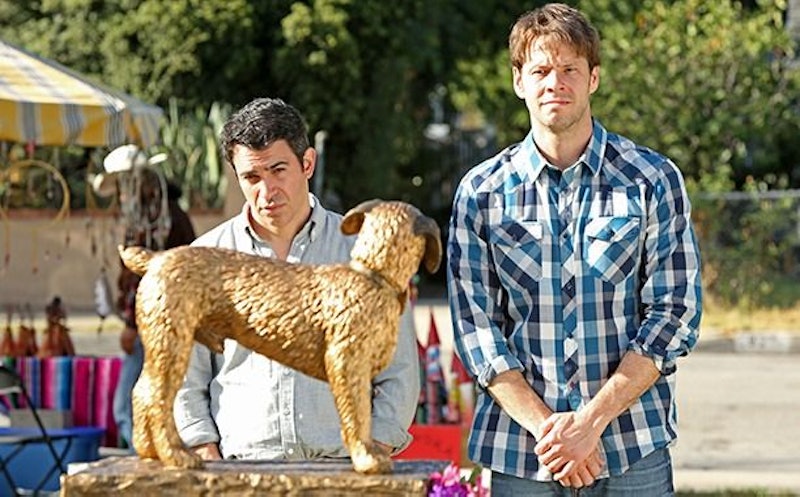 Since The Mindy Project moved to Hulu, there have been subtle changes occuring within the structure of the show. That might be the most obvious with the newest episode "Road Trip," which acts as an almost-bottle episode, following Morgan and Danny as they travel across the country together. Our fearless leader, Mindy, was barely featured in the episode, staying at home with newborn son, Leo. Instead, The Mindy Project men, Morgan and Danny, took the reigns this episode, and you know what, I think it worked. Because, while this is The Mindy Project, the other characters are strong enough to stand on their own.

Some people have strong opinions on episodes that follow exclusively one story line (a story line that doesn't feature the main, titular character). While this episode felt different without Mindy, Danny and Morgan showed that they can also carry an episode to execution. With the storyline of Danny traveling to California to tend to his father, who had a heart attack in the previous episode, it allowed Morgan and Danny to spend some quality time together. And for those of us who love Danny and Morgan's characters, it was refreshing to get some one-on-one time with them.

Should every episode be like this? No, even though Ike Barinholtz (Morgan, who tweeted above) would probably love it. But the chemistry between Danny and Morgan works for one episode. Morgan always raves about his relationship with Danny, even though Danny seems to see their friendship as purely work-related (but don't introduce Morgan as your co-worker, because that is a stab in the heart).

As a diehard Mindy Kaling fan, I didn't find that I missed her in this episode. Her sense of style was still very much present throughout (we even got a quick phone call from her). I think that exploring the other relationships on The Mindy Project is what is going to keep the show interesting. Since Season 4 began, I worried that the show was just going to be about Danny and Mindy's relationship and as new parents. This episode broke that up, halting the monotonous tone that the show could have easily fallen into.