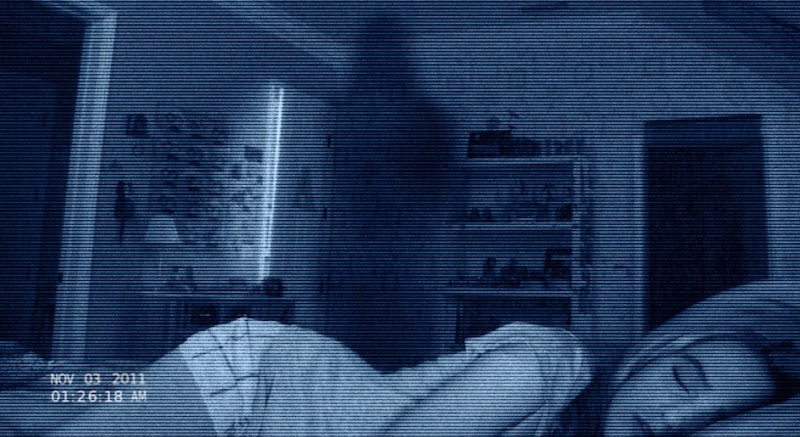 It's almost Halloween, and you know what that means: It's time for another Paranormal Activity movie to hit theaters. Just like Saw before it (which had a total of seven films, if you're keeping track), the franchise has released a new film around Halloween almost every year since 2009 (2013 was the only year that brought a Paranormal Activity-free holiday). This year's release, Paranormal Activity: The Ghost Dimension, is the sixth film in the franchise. It continues the story of Katie and her demonic pal, "Toby," and it promises to be the first film in the series that actually shows what the demon looks like. The series has always operated under the belief that the unseen is more terrifying than the seen, so with the direction the new film is taking, it would seem the series has nowhere left to go, and that yet another sequel, Paranormal Activity 7, would be unlikely. But could it happen?

According to producer Jason Blum, the newest film is truly is the end of the series. Blum told USA Today in June:

"It's coming to an end. This is it, the finale. We're saying it before the movie opens. We're not going to grind this horror franchise into the ground. This will keep Paranormal Activity as part of this culture and this particular time in a really fantastic way ... We couldn't go just teasing. All the questions that everyone has asked from the past Paranormal Activity films: What does Toby look like? What's the backstory to the families? These questions have been teased out. Now they will be answered."

It definitely doesn't sound like Blum is mincing his words, and this is from a guy who loves making horror movie sequels. It's kind of his bread and butter. His production company, Blumhouse Productions, specializes in making low-budget horror movie franchises; the original Paranormal Activity was their first feature, and is their largest franchise at six films. It's also the biggest cash cow for the company, as the first five films have brought in a total of over $811 million at the box office on a combined budget of just over $18 million, making the franchise one of the most-profitable of all time (the original film, which made $194 million on a $15,000 budget, is widely-credited as the most-profitable movie ever made). So why bring it to an end?

A reason might be simply that the producers care enough about the fans and the series' legacy to let it rest in peace. Viewers want to see the demon and learn the series' secrets, and once that's done there's no story left to tell. Oren Peli, who directed the original film and is co-producing the last entry, told USA Today his reasoning for the big reveal in this "final" film, saying, "We've done well without showing Toby, being able to create tensions and scares based on audiences' imagination, but people are very curious."

But before Paranormal Activity fans begin wailing and rending their garments in despair, Blum is leaving the door open for a potential reboot down the road. "At some point, might there be a reboot? You never know. We've never discussed it," Blum said.

So there you go, Paranormal Activity: The Ghost Dimension might not be the final entry in the series after all. Who knows, maybe they'll even reboot the franchise in time for next Halloween!