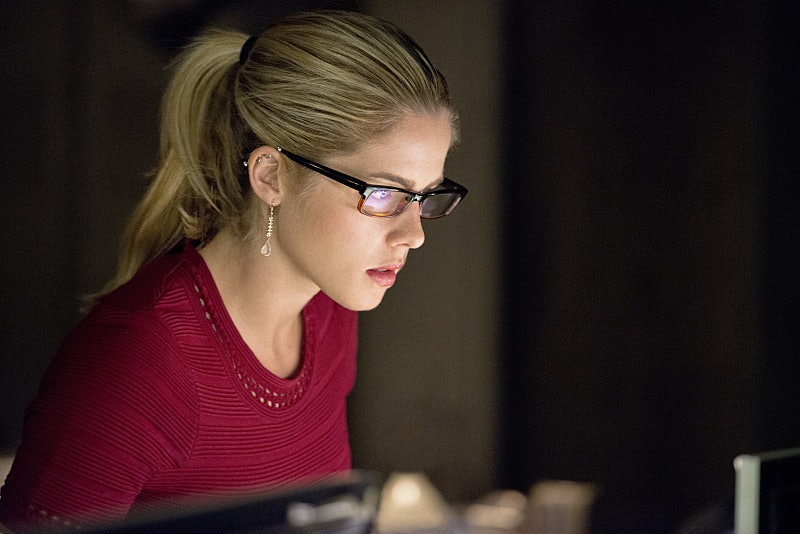 We've all experienced cell phone issues from time to time. Heck, depending upon your carrier, it may even happen on a daily basis. But when someone as technologically savvy as Felicity is having similar issues, you can't help but wonder if there's something else afoot. Wednesday night's Arrow episode "Restoration" was jam-packed with some serious plot developments, which included seeing Sara Lance return from the dead. However, I found myself intrigued by a much subtler storyline. While visiting Palmer Technologies, Felicity's phone started acting up and looked to be like something out of The Matrix. She brushed it off as a weird glitch and figured a good ole restart would fix the issue. Except it didn't. In fact, by the end of the hour, Felicity received a cryptic cell phone message from an unknown source, which spelled out only one word: Felicity.

Now I'll admit that's really not much to go on here, but I have a sneaking suspicion that this could be Ray Palmer trying to communicate with his former flame. As you recall, Ray appeared to have exploded in the Arrow Season 3 finale, but we know better. Ray didn't die — he ended up shrinking to the size of an "A.T.O.M." So maybe this is his way of trying to inform Felicity that he's alive and in serious need of a size upgrade.

Ray trusted Felicity more than anyone and he's well aware of her intellectual capabilities. Perhaps she's his only hope of figuring out how to reverse the shrinking process and get him back to normal again. Of course, I could be way off base here, but there was just something about this side plot that felt loaded with a hidden meaning. Plus, who else would be trying to contact Felicity in such a tech-y, cryptic way? This could be the beginning of Ray's return to the small screen and help pave the way for his Legends of Tomorrow story arc.