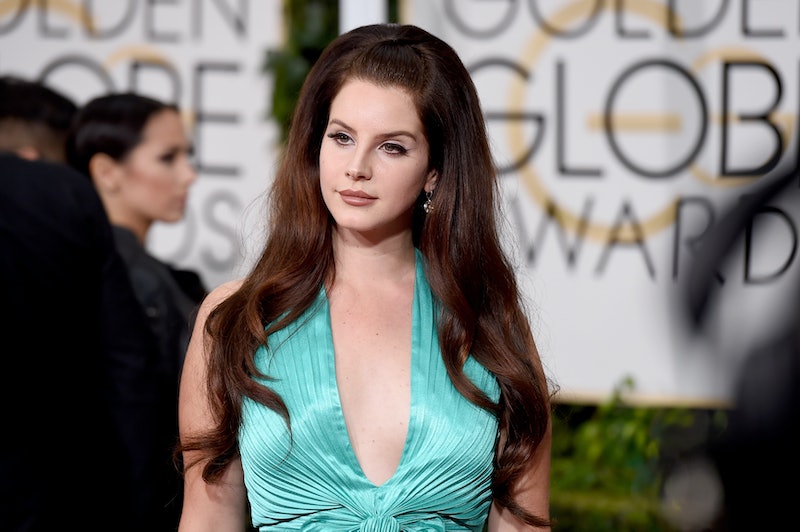 While she seems to lay it all on the line in her music, Lana Del Rey's identity is hard to define — no thanks to the constant rumor mill that churns around her. But in the latest Billboard cover story about Del Rey, the singer — born Lizzy Grant — gets a chance to explain herself, talking in-depth about her fame and how it almost never happened. She also gets real about who she is on a much deeper level. The anxieties she's faced throughout her career, along with her own relationships — both bad and good — with her family, ex-boyfriends and James Franco.

Lana Del Rey is a mystery the world loves trying to solve. She was dubbed a "gangster Nancy Sinatra" with 2012's Born To Die, but, with her latest release Honeymoon, she's a femme fatale worthy of a film noir. She's a cultish and coquettish figure who is both the topic of extensive fan fiction and critical essays about feminism — mostly debating whether she is one or not. She's a dichotomy that people love to dissect.

Below, we've compiled some of the more interesting facts from the Billboard story that could help piece together the puzzle that is Lana Del Rey.

1. Her Fans Can Be Too Much For Her Family

Del Rey says that she lives with her younger sister Caroline "Chuck" Grant, who is a photographer, but Chuck doesn't like to photograph Del Rey's concerts because the fans are so emotional that it's a tad bit overwhelming for her.

Del Rey says she like going for long walks and drives, often in Big Sur, but it's gotten a bit touristy for her taste. "I went to the General Store, and there were hordes. On a Monday!," she said. "But I’m drawn there. Sometimes I go to write." She's even thinking about filming a longer video there soon. What is it that attracts her to that rugged stretch of the coast? "Big Sur challenges me to surrender... I’m really drawn to the curves."

3. She Believes In Psychics

Del Rey definitely believes in signs, saying that she once went to a clairvoyant who asked her to write down four things she was thinking about on a card and she managed to address all four things. "I asked about the man I was seeing — that one, before the one now. She said, 'I don’t really like to go there, but... I just don’t see him present.' I went, 'Ugh. She’s seeing the future and doesn’t see him present. Oh, no!'" Del Rey says this should have been an omen since her relationship with this man "wasn't good to be in it, but it wasn’t good to be out of it, either. He was like a twin."

When asked if she knew the power she had over men, Del Rey said no. She didn't even realize heterosexual men listened to her music, never mind like it. Instead, she tells a story about being 16 and having a boyfriend who was 25. While driving erratically in his pick-up, she started to scream, and he looked over at her and said "I love that you're out of control." According to her, that was the moment she lost the upper hand — the one she never actually knew she had — in that relationship.

5. She Wants To Write A Book

But, as Del Rey explains, "you need a beginning, a middle and an end! I can deal with four minutes — but I’m not so sure about a book." Nonetheless, she does say she's thought about writing something about a reclusive singer who loses her mind in a well-protected house in the Hills. Even giving the interviewer a brief synopsis of the tale:

"She has this Nest-like security system installed, cameras everywhere. The only people she saw were people who work on the grounds: construction people and gardeners," she said. "One day she hears the gardener humming this song she wrote. She panics and thinks, 'Oh, my God. Was I humming that out loud or just to myself? And if it was aloud, wasn’t it at 4 in the morning? Did that mean he was outside my window?'"

6. She Wants To Have Kids

Del Rey explained that, since turning 30, she's definitely thinking about having kids. "I’d love having daughters," she said. "But I don’t think it’d be a good idea to have kids with someone who wasn’t... on the same page." While she jokes that the ideal parenting partner would be someone just like her, she also wonders if "maybe it’s best to have kids with someone who’s... normal."

7. She Makes Lists To Help Her Anxiety

Del Rey suffers from panic attacks, admitting that she has since she was just 4 years old. "I’d just seen a show on TV where the person was killed. And I turned to my parents and said, 'Are we all going to die?' They said 'Yes,' and I was totally distraught!," she said. "I broke down in tears and said, 'We have to move!'" But now she's come up with ways to help subside her fears including making lists, which she sees as a reward system. "To calm myself down. I reward myself. You know, 'If I finish this, then I’ll do that' — I’ll go for a walk on the beach or swim in the ocean," she said. "I go for swims and am actually shocked I do that. Because one thing I’m terrified of is sharks."

8. She Would Like To Play Sharon Tate In A Movie

Del Rey says actor James Franco tried to get her to appear in three different films by a Spanish director (who she does not name), but eventually stopped asking. "I think he heard my hesitance and got scared," she said. However, she was later asked to play actress Sharon Tate in a movie about Charles Manson. "I thought, 'That’s so right,'" of playing the Manson family victim, who was brutally murdered in her Los Angeles home in 1969. The movie was never made, but she'd still be interested in playing the part some day.

So, what did we really learn about Del Rey? Well, she's not as allusive as we may have originally thought or even hoped. The Del Rey we think we know from her music is just a character, in actuality she's just a California girl who suffers from anxiety and hates sharks. Not so different from the rest of us really.