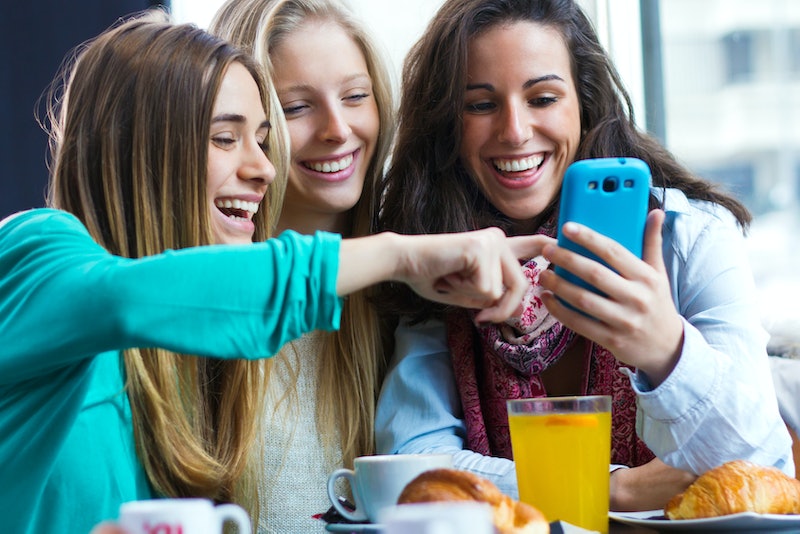 Over the past few months, the dick pic has come to represent the epitome of unethical behavior in texting and online interactions. "I can't think of anything more threatening to send a woman than a picture of a penis," Ryan Reynolds recently said on Conan, eliciting praise from M ic, Refinery29, and elsewhere. And a Someecards article showcasing some of the "best" responses to dick pics, including "Thought I would like your lumpy ass dick and tiny crinkly balls?" and "Is that a stillborn rabbit?" has gone viral. What exactly are we fighting in this vicious war on dick pics? And might we want to pick our battles more wisely?

The trend of sending unsolicited dick pics is either picking up with the rise of online dating, sexting, and Snapchat or simply gaining more attention in the media these days. Whatever the cause, this increased awareness could serve as an important jumping-off point to discuss why consent matters not just in our face-to-face interactions but also in our electronic communications, regardless of what body parts we possess. But it seems to have started more conversations about how unsightly certain dick pics — and the dicks in them — are.

For example, a video called "Women React To Dick Pics" went viral earlier this year, with women assessing pictures of penises (which they, unlike some dick-pic viewers, consented to viewing as part of the video) with commentary like "Ew! This is a sad little one," "We don't want some weird, sluggish dick pic," "Why is this man's penis darker than his normal skin tone?", and "I f*cking hate you."

The point of this video, the women spell out very clearly at the end, is: Don't send dick pics.

And I think we need to send a more nuanced message — one more along the lines of, "Don't send sexual images or messages without consent."

Telling people not to take part in any sexual act is always problematic, as long as it is between consenting adults, and focusing on dick pics rather than consent both shames people who send and receive dick pics consensually and obscures the importance of consent for everything else.

A lot of the commentary in the "Women React To Dick Pics" video and articles are harsh, as is a lot of the feedback people are giving independently. Exhibit A:

What If You Enjoy Receiving Them?

Would we be OK with people openly criticizing the size, shape, color, or age of vulvas? Men are already extremely critical of their penises, with more than half believing they are below average size. I'd imagine that hearing people shamed for the appearance of their penises would only make matters worse.

In addition to amplifying penis insecurities, dick-pic shaming has taught people who solicit dick pics that they are unusual for doing so. But I've asked partners for them from time to time, and I know other people who have. Before the Internet exploded in dick-pic hatred, I actually thought soliciting dick pics was normal, and accordingly, I felt perfectly normal for doing it. But ever since I started hearing about how gross they are and how much women supposedly hate them, I've become afraid of coming off like some kind of freak if I admit I enjoy them. On top of that, along with dick-pic shaming often comes the argument that women aren't visual, which not only is inaccurate but also makes women who are visual feel like there's something weird about them.

We're not weird, though. Plenty of people have solicited dick pics and plenty have sent them upon request. Yet a lot of writing about this issue hasn't acknowledged that, perhaps out of fear that admitting some people like dick pics would somehow mitigate the harm of sending unsolicited ones. We've conflated dick pics with the circumstances under which people sometimes send them. But those are two entirely separate issues, and we need to do a better job keeping these issues — dick pics and lack of consent — separate because one is a problem and one is not.

By disparaging the pictures themselves rather than the act of sending them without permission, we take attention away from the issue of consent. With texting, Snapchat, and other technologies that make the sharing of images and words ubiquitous and possible with near-strangers, we need to talk about forms of harassment that can occur when two people aren't even in the same room. This includes sexual language as well as images, and it counts whether that image is a picture of genitals or a shirtless selfie and whether the subject of the photo is male or female. Making fun of dick pics doesn't help people realize this. In fact, some of the rhetoric surrounding dick-pic shaming — particularly the argument that men are more visual than women — actually serves to excuse non-consensual photos featuring female bodies.

And while we may think that issue simply hasn't come up because women aren't sending sexual texts without consent, it (like many acts of sexual misconduct committed by women) probably happens more than we realize. I'll be the first to admit I've snapped sexy photos and sent them to partners without asking. I later found out that one arrived while my significant other's phone was in plain sight of his friend, which probably put him in an uncomfortable position. More gender-neutral discussions about non-consensual nudity could prevent scenarios like that. And, as an aside, the fact that I shouldn't have done that doesn't mean I should be body-shamed for it.

Videos and articles about how unattractive dick pics are add very little to our understanding of consent, all while slut-shaming people who have solicited them and making those with penises more self-conscious about a body part many are already critical of. And by focusing on how hideous dick pics are rather than admitting that some people like them and lack of consent is the real issue, we take attention away from all the other ways people can sexually harass someone through the screens of their phones.

Don't get me wrong: sending unsuspecting recipients pictures of a penis is creepy. So is sending pictures of a vagina or describing sexual acts in your online dating messages. We need to talk about all these potential violations, and we can definitely do it without bashing penises or shaming people who send and receive dick pics consensually. And when it comes to dick pics that aren't consensual, let's blame the owner, not the dick.