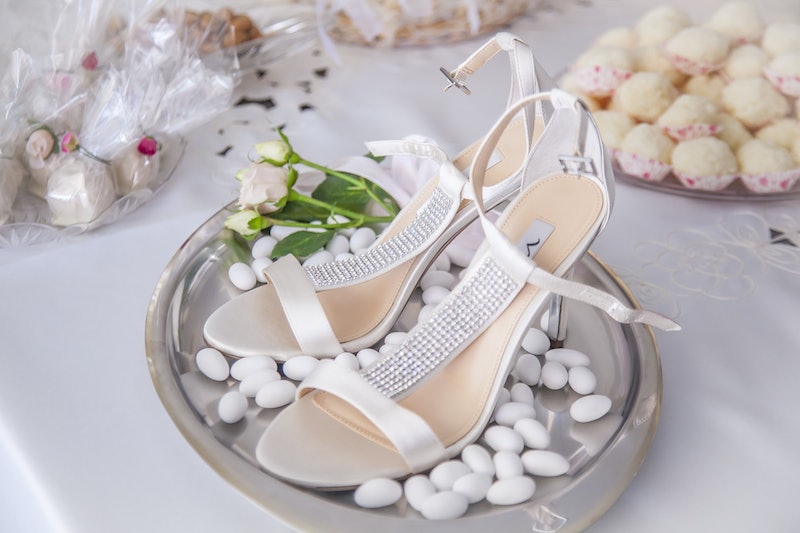 For instance, if you're not having a florist because your super talented aunt with a green thumb is creating your wedding centerpieces in order to save you money on your wedding flowers, then you do not need to book your florist six months in advance. So how does a DIY couple know when they should be doing certain wedding planning tasks?

In all honesty, there is no straight answer, because every DIY wedding is different. One wedding may have branches and leaves in a large mason jar for centerpieces (which can be made a few weeks before the wedding), while another may have fresh flowers picked from a flower farm (which must often be done the day before or on the day of the wedding).

However, with that said, there are some standard DIY wedding planning tasks that can be done at certain times. Below you'll find a comprehensive list, so dive in, plan away, and make sure to have fun doing it!

When you first get engaged:

____ Determine goals for your wedding.

____ Decide on the style, theme, or overall vibe for your wedding.

____ Determine how much time you can devote to wedding planning.

____ Create a budget if necessary.

____ Figure out how many family and friends you expect to help you put your wedding together.

____ Decide on a wedding party, if you are having one.

Shortly after you're engaged:

____ Find and book your wedding venue.

Six to eight months out:

____ Start looking into reservations for any group wedding weekend activities if applicable.

____ Begin to book other vendors applicable to your wedding that you haven't already booked (for example, transportation, a photobooth, etc.).

____ Decide on wedding attire for you, your partner, and the wedding party.

____ Start thinking about and choosing your wedding decor, as well as other wedding items such as the guest book, seating chart, and favors.

____ Decide what DIY projects you want to do, and plan when you will do them (the earlier, the better!).

____ Visit the venue again, and make your event layout.

____ Start looking for your wedding rings.

____ Discuss and choose with your partner what things you would and wouldn't like to include in your day-of timeline (for example, a cake cutting, bouquet toss, etc.).

____ Start creating your job list for family and friends who will be helping on your wedding day.

____ Get your wedding attire altered if necessary.

____ Start writing or brainstorming your vows.

____ Finish up any DIY projects that you can.

____ Loop in your wedding coordinator (or the person who will be the point person on your big day), if you decide to have one.

____ Finalize the items in your day-of timeline, and assign exact times to the different parts of the day.

____ Finalize your wedding ceremony with your officiant.

____ Go over your wedding timeline with your coordinator or point person, photographer, caterer, and DJ to get their feedback, and then update accordingly.

____ Get your marriage license.

____ Finish up your wedding purchases and projects for things like menus and programs.

Two to three weeks out:

____ Track down any missing RSVPs.

____ Update your day-of timeline with information from vendors.

____ Make your song list for your DJ, and specify the order of your wedding party for introductions.

____ Have a meeting with your coordinator (or point person) to go over all the final wedding details.

____ Start packing for your honeymoon if applicable.

____ Send out a final timeline to all wedding vendors, and make sure they have directions to the venue, unloading info, and parking info.

____ Make a packing list of things you want to bring to the venue, including a DIY wedding emergency kit.

____ Write out final checks for payments and gratuities for your wedding vendors.

A couple days before the wedding:

____ Begin set-up at the venue as early as the venue will let you in.

____ Drop off welcome goodies for guests at hotels if applicable.

____ Buy any perishable food items that you are responsible for serving during the wedding weekend.

The day before the wedding:

____ Finish (or start) setting up the wedding ceremony and reception spaces.

____ Have a wedding rehearsal.

____ Hand over the planning reins and your planning materials to your wedding coordinator or point person.

The day of the wedding (yay!):

____ Get married, and soak in all the love you feel from your partner as well as your nearest and dearest family and friends, because DIY weddings are super amazing

The day after the wedding:

The week or few days after the wedding:

____ Take a breather from wedding-related tasks and go on a honeymoon, mini-moon, or even a stay-at-home honeymoon.

One to three months after the wedding:

____ Relish in the memories of your amazing wedding day. Congrats!

For more wedding ideas, check out Bustle on YouTube.

More like this
The Best Time To Date After A Breakup, According To Experts
By Bustle Editors
The 7 Best Hand Fans For Weddings
By Jenny White
20 Things You Should Never Tolerate In A Relationship
By Rachel Sanoff and Kathleen Ferraro
12 Ways You're Sabotaging Your Love Life
By Teresa Newsome and Lexi Inks
Get Even More From Bustle — Sign Up For The Newsletter