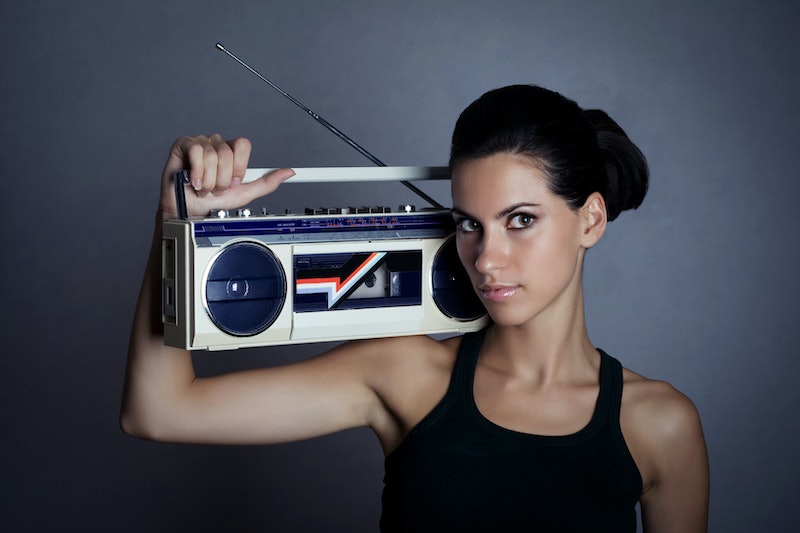 But think back a couple of decades ago when Playboy was still pushing the boundary of what sexy meant. The '90s were a time when women’s sexuality got a major push. It was a time when posing for Playboy meant female empowerment. But it was also a time of "The Rules", sex scandals, and objectifying women.

In the latest "I Want It That Way" podcast, Bustle talks to award winning journalist and documentary film producer Allison Yarrow on how women’s sexuality has evolved since the '90s.

Here are some highlights of sexuality in the nineties.

Media coverage in the '90s were bookended by two major sex scandals: the Anita Hill hearings in 1992 and the Monica Lewinsky scandal in 1998.

In 1992, Anita Hill, a law professor from the University of Oklahoma came forward and testified before the senate judiciary committee that supreme court nominee, Clarence Thomas sexually harassed her. Essentially, media coverage of the hearings were very unkind toward Hill. Various outlets not only questioned her credibility but even created a narrative of “erotomania.” Think Sharon Stone in Basic Instinct.

Then, in the late ‘90s there was Monica Lewinsky. As the story goes, a young woman interning in the white house has an affair with the President of the United States. While the media in a sense excused Bill Clinton for his behavior, Lewinsky was blamed for not playing her role as the sexual gatekeeper.

In short, media narratives for both sex scandals in the '90s were greatly skewed against the women involved. While Hill was portrayed as this erotomaniac, Lewinsky was essentially blamed for giving Clinton the sexual green light.

But, oh how the times have changed. There’s definitely something that can be said about strength in numbers. Nowadays, women are not afraid to come forward and have their voices heard. We no longer live in a time where only one side of the story is told, where public opinion is dictated by what mainstream media tells them. Nowadays, there’s pushback. Placing the blame solely on the woman is no longer tolerated.

While a recent study found that sex sells when it comes to music today, the '90s were all about testing the waters and seeing what buttons could be pushed in terms of sex and sexuality. Although it may seem quite tame by today’s standards, a form of sexual liberation in the '90s was Alanis Morisette singing about blowing a guy in a theater.

The '90s were also defined by Girl Power. Britney, Christina, and the Spice Girls definitely laid the groundwork for the type of pop feminism that we have today. #Squadgoals anyone?

The '90s were the era of the supermodel, which generated the idea that, “sex sells.” Nowadays, not so much. If a company is going to objectify a woman for the sake of selling a product, the internet is going to have something to say about that.

“Using sex in advertising really reached a new cache in the nineties. People were responding to it,” Yarrow says. “Now, people need to be sly and conscious. Consumers are pushing back on things that are sexual without the purpose.”

Dating in the '90s was defined by The Rules and Men Are From Mars, Women Are From Venus. It was the Meg Ryan decade with You’ve Got Mail and Sleepless in Seattle. The '90s were also a time where people actually valued face-to-face, in-person dates.

Nowadays, we’re inundated with a plethora of options. We can easily find someone to date or sleep with in one swipe on our cellphones. But according to Yarrow, “It’s not clear to me that more choice is necessarily a better thing.”