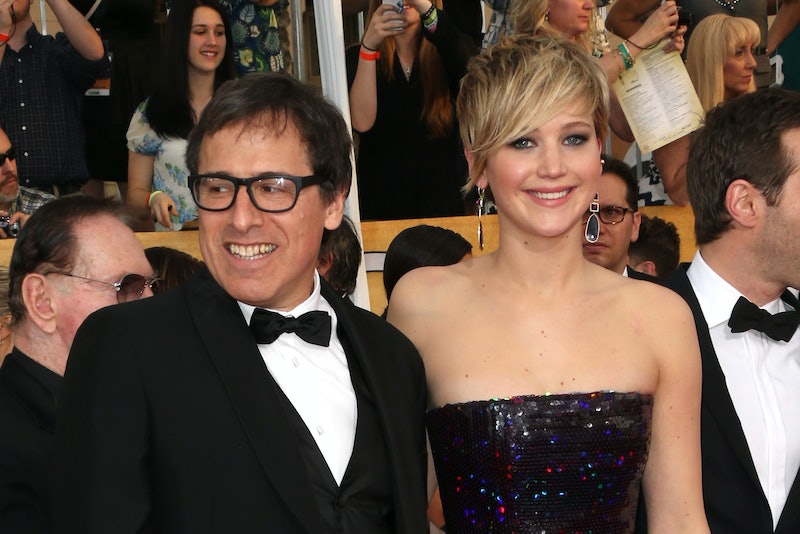 In case you were wondering what the people who have worked with Jennifer Lawrence when she was paid less than her male costars had to say about her complaints about being paid less than her male costars, David O.Russell has responded to Lawrence's wage gap essay doing just that. As I'm sure you'll recall, Russell has worked with Lawrence multiple times already in her relatively short career, directing her in movies like Silver Linings Playbook, American Hustle, and the upcoming Joy. While he has a bit of a history of disagreeing with his stars — he was caught arguing with Lily Tomlin on the set of I Heart Huckabees in 2004, though the actress chalked it up to Russell being under pressure, according to Time — I was optimistic that he might have a productive response to the anger Lawrence voiced in her Lenny essay.

After all, Russell hasn't stopped working with Lawrence since the moment he first cast her in a movie, and their collaborations have been extraordinarily mutually beneficial. Their three films together have garnered both the director and actress an immense amount of attention and accolades, so I assumed a baseline of respect for Lawrence on Russell's part, and was expecting him to support her very valid frustrations about the reveal in the Sony hack that she'd been underpaid on American Hustle. But in Russell's interview with The Hollywood Reporter discussing Lawrence's essay, that's not exactly how it went down.

I always support all my actors and all their opinions, and I want them all to get what they need. I don’t really talk about the minutia of what goes on in my movies, but I believe the spirit of what Jennifer is saying is truthful to her heart. I support her and all women in that.

While Russell is supportive of Lawrence, there's not much to this statement. He's throwing a lot of words like "spirit" and "heart" around, considering that this is supposed to be a cold hard business discussion. This is about money, equality, and fairness, and to imply otherwise, that it's about feelings, seems like slapping a label on Lawrence's very good point as something that stems from emotion instead of good sense. Because if you really support the songs written on her spirit or whatever, you should want to see her paid the same as her male costars. It's as simple as that. But he continued:

I understand what she’s saying, and I think people in the business do too, and I also understand people saying, “Well, let’s talk about the minutia of the deal.” It’s hard to make a movie come together with a lot of big stars. American Hustle had a lot of big stars in it. We all contributed to help make it happen … But I also respect that Jennifer is finding her voice, and I think it’s in service of something very important.

It also strikes me as odd that Russell keeps downplaying Lawrence's salary as "the minutia of the deal," when it is clearly a pretty huge part of a star's contract. And by referring to Lawrence's strong essay as the actress "finding her voice," a phrase I highly doubt he'd use to describe a male actor, Russell is proving why this issue is so important. Lawrence isn't finding her voice, she's already found it, and effectively used it to point out the inequality she's faced in Hollywood. I hope Russell is taking her concerns more seriously than this interview makes it seem, otherwise I wouldn't be surprised if she takes her heart, spirit, and voice over to a more equal-minded director when she's looking for her next role.