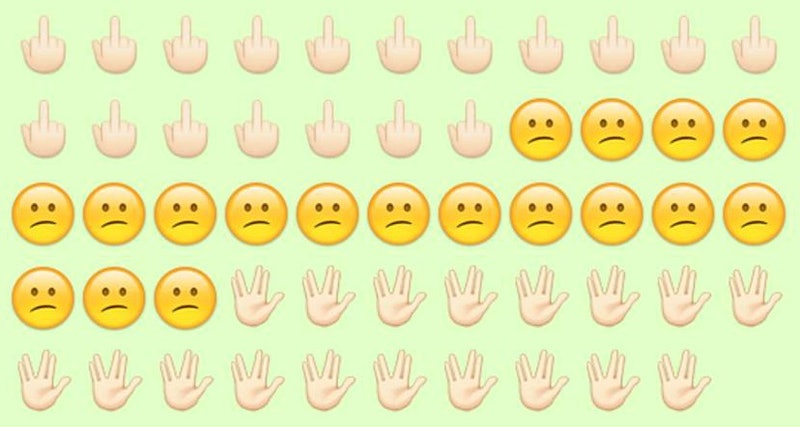 Apple nearly broke the Internet this week with its iOS 9.1 update, which just so happened to feature a slew of adorable and socially relevant emoji (how did we live before burrito texts?). But, for many, one question loomed: Are the new emoji on Android? Well, I coming bear both good news and bad news, my friends: Android users do have access to some of the new emoji, although not in the regular SMS program. Some of them are available in WhatsApp Messenger... but not all of them.

So womp, womp — the day when Android lovers can send their loved ones a levitating man in a business suit emoji has not yet come. But, in happier news, not only did a few of the new emoji make it to WhatsApp Messenger, but the likelihood they will all eventually pop up is good. WhatsApp for Android has long used Apple-style emoji images for its roster, although it is unclear whether they model their emoji directly from Apple. Also, as I mentioned the day the iOS 9.1 update dropped, WhatsApp Android users had been enjoying some of Apple's "new" emoji for months prior.

All this is to say: Buck up, kiddo! You'll likely be inundating your besties with burrito messages in no time. Until then, WhatsApp users have a few key favorites from the new emoji update that did translate to the popular messenger app. Emoji like, for example...

In life, certain crowning moments come along that you never forget: Your first kiss, when you learned to drive, the day you graduated — and the day you learned WhatsApp allows you to send your friends the digital middle finger at random. And it's about time, really, because adult life needs more milestones that don't involve getting older. Besides, it solves the ever-pressing conundrum of how to reply to people who respond to texts with the ol' passive aggressive "K" or thumbs up.

While I'm sitting over here rejoicing that I can now add flipping the digital bird (sorry, friends!) to my roster of top-notch procrastination skills, my husband and in-laws were celebrating the fact that they could now reaffirm their Star Trek nerd status 4 lyfe by ending every message with the Vulcan Salute. Infer from that what you will about our personality profiles, although it should be noted my husband did send me a middle finger emoji when I confessed I didn't know what the Vulcan Salute actually was. Ooopsie.

I'm not entirely sure how the slightly frowning face is only just now making it to emoji, since so many of us default to it. It's essentially the equivalent of RBF (aka Resting Bitch Face). It's also how we all wish we could respond to 90 percent of the status updates on Facebook — not quite a "like," not quite a "dislike," but somewhere in between. Get on that, would you, Tom Anderson?

If none of these new emoji are your jam, though, you could always just make the most of the existing emoji you do have by incorporating them in your terrible puns...

... or to unlock the mysteries of life.