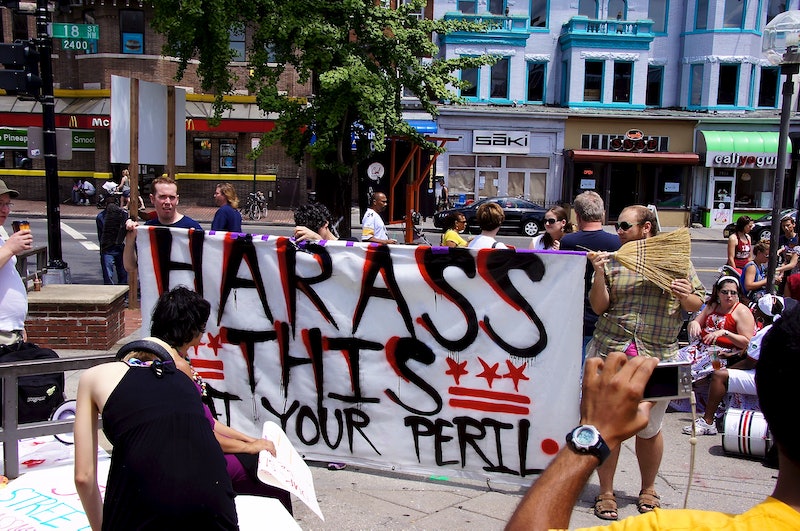 In a recent letter to The Irish Times, Jenny Stanley described a harrowing experience of sexual harassment she faced while taking the bus home from work in Dublin. She also took the opportunity to discuss why street harassment is harmful — something that so many women have pointed out, yet which so many people still somehow refuse to believe. As Stanley writes, catcalling is not a compliment, and street harassment is a big deal — and the chorus of voices her belong to prove that it's long past time to acknowledge these facts.

Here's how Stanley described just one portion of her experience:

It began with one group member looking directly into my eyes, pointing at me, turning to the others and announcing, “I fancy that one.” That “one." To which another member replied in agreement, suggesting what he might like to do if he got me home. To which another added further details to this imagined scenario in which I was an object with the sole purpose of fulfilling their desires; details which filled me with pure white rage and, if I am honest, questions around my own value as a person.

The story may sound extreme, but it's not uncommon. Many other women and members of other vulnerable groups have come forward to discuss their experiences of harassment in articles and on social media. Here are some of the ways that street harassment has harmed them — ways which you'd think would be obvious, but which are apparently still not.

1. Street Harassment Highlights The Inequality Of Women's Status In Society

"If I can be seen in this way, I must not be perceived as an equal member of society by these people," Stanley wrote. Indeed, sexual harassment reminds women that their bodies are still considered public property to comment on, not human beings with privacy, which we already learn through slut-shaming, rape culture, and attacks on our reproductive rights. Here's the thing, though: Nobody's bodies are public property. Ever.

As the now-infamous video of Shoshana Roberts walking around New York City for 10 hours showed, women can get harassed pretty much everywhere they go, in any set of circumstances. Feeling unsafe in public restricts women's mobility and prevents them from going where they want or need to go out of fear that they will be harassed or worse.

More often than not, people don't stand up against street harassment. Sometimes, they even join in. In the disturbing Facebook post above, writer Anne Thériault recounts men witnessing her harassment and telling her that she must like the attention and that she was asking for it. Even when people say nothing at all, it reinforces the belief that this behavior is OK.

LGBT people often experience the worst of street harassment. "Every morning when I wake up and look at my closet I ask myself, 'How much do I want to be street harassed today?'" writes trans writer and artist Alok Vaid-Menon. "This means I usually gravitate away from the skirts and dresses and move begrudgingly toward the more conventionally 'masculine' clothing." Harassment is used not just to objectify women but also to remind gender-nonconforming people that society does not accept them.

Trudy Hamilton writes on her blog The Gradient Lair that in cities "where public transportation is scarce and most ride in cars who can afford them and live in suburbs, the poorest women (who tend to be Black and Latina) who live in apartments and urban areas and use public transportation face more street harassment than those 'safe' in their suburbs and cars and work in buildings set back from the street that they drive into. Even in dense spaces many men will skip over even speaking to a White women to harass me or other Black women. They smile at her while I and other Black women are 'bitches.'” Certain groups in our society are considered more "worthy" of respect than others (which, like so many other things, is BS), which means that women of color, among others, face a disproportionate amount of harassment.

6. Street Harassment Makes Victims Forget How They Deserve To Be Treated

"My experience of this night has made me realise that I have become somewhat desensitised to this kind of behaviour and so my reaction to these acts was quite muted," Stanley wrote. The commonality of street harassment makes women forget that they deserve better. Objectification and threats are the norm, and after a while, that really does — as Stanley puts it — provoke "questions around [your] own value as a person."

More like this
Beyoncé & Madonna’s “Break My Soul” Remix Honors A Group Of Black Icons
By Stephanie Topacio Long
Charlene White & MPs Lead Tributes For Bristol Bus Boycott Organiser Roy Hackett
By Sam Ramsden
22 Movies On Netflix That Are Perfect For The Whole Family
By Bustle Editors
Your Daily Horoscope For August 15, 2022
By Mecca Woods
Get Even More From Bustle — Sign Up For The Newsletter