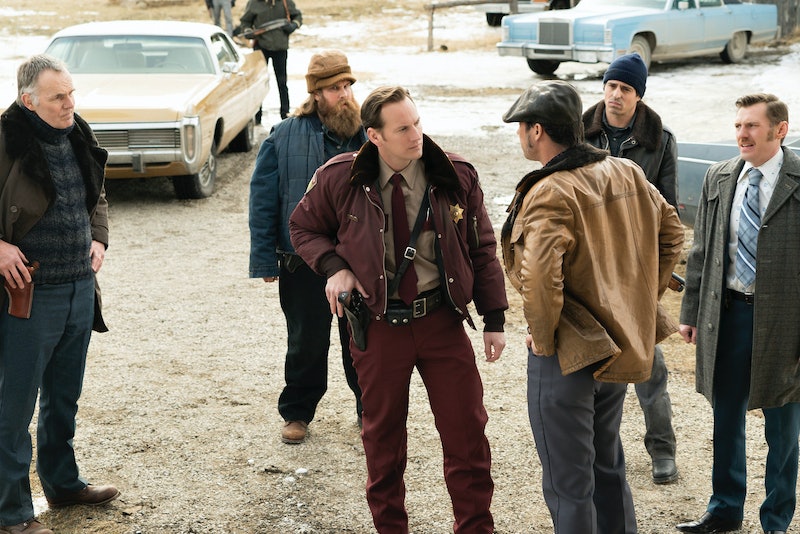 The introduction of every episode of Fargo claims that the wide-reaching crime narrative is "a true story." While this is a falsehood, there's a deep history of sordid real criminal activity in Fargo, the North Dakota city that lends its name to the series. The television series Fargo follows the supposed seedy underbelly of crime that infects the northern midwest parts of America, where people are usually smiling and say folksy phrases like "oh ya?" and "don'tcha know?" during conversations. The film and show tap into a truth about living in America — no matter how nice everybody is, someone is probably going to want to kill someone else for shallow reasons.

Despite being the name of the film and show, not a lot of it takes place in Fargo. In the original film, Fargo is merely the town that the initial encounter between car salesman Jerry Lundegaard and hired hitmen Carl and Gaear. In the first season of the television series, Lorne Malvo goes on a shooting rampage in Fargo, killing 22 people in retribution for having hitmen sent after him. The second season has yet to visit Fargo, but considering some of the events that happen in the city in real life, it can be expected that someone in the show with bad intentions will be making a visit to the city sometime soon. Here are some crime stories from Fargo, North Dakota that drive home that point: Truth really is stranger than fiction.

In June, Ashley Hunter, a 35 year-old-male, became the prime suspect in a case where two neighbors were killed within a 24-hour period in North Fargo. Police report that Hunter knew the first victim, but seems to have no link to the second one. Hunter has plead not guilty to the charges, and he's currently awaiting trial.

Many of the citizens of Fargo expressed their sorrow after the events, including Fargo landlord John Blutman who said, "It's crazy what goes on around here," and Police Lieutenant Joel Vettel who said, "A good young man unknowingly opened his door to a monster." Police were sure to point out that these crimes had no connection to a previous charge against Hunter where he allegedly stabbed another man during a threesome in February 2013. For that crime, Hunter entered into a plea bargain and his "aggravated assault charge was dropped to a simple assault charge" for which he was sentenced to 34 days in prison and two years of probation.

In September of 2014, the body of an 18-year-old Tom Bearson was found at Larry's RV Sales in Moorhead, Minnesota — a bordering city of Fargo. As of July 2, 2015, police have no suspects aside from the to-be-confirmed driver of a sedan caught on security footage. However, the deceased's girlfriend says that many of the last people to see Bearson alive are refusing to take polygraph tests for the police. The most Fargo thing about this story is that a terrible thing occurred at somewhere as innocuously named as "Larry's RV Sales." When it seems like the writers are being ironic by placing a shootout at a waffle diner, they're not. That's just how these things happen sometimes.

In one of the most Fargo-like criminal cases in the Fargo, ND area to occur in recent years, Gene Kirkpatrick of Oklahoma was convicted in 2011 for "hiring a hit man to kill his son-in-law Philip Gattuso of Fargo to gain custody of the murder victim’s three-year-old daughter." The details of the crime even sound like an episode synopsis of a Fargo series: "Kirkpatrick [hired] his handyman, Michael Nakvinda, to kill Kirkpatrick’s Gattuso, a Fargo dentist. Nakvinda was convicted of beating Gattuso to death with a hammer in Gattuso’s south Fargo condominium." The murder itself happened the same way that Lester Nygaard killed his wife in the first episode of Season 1 of Fargo, and a hitmen scheme gone wrong was the basis of the original film.

Even though Fargo gets a lot of mileage out of juxtaposing the dark severity of murder against the friendly backdrop of middle America, the reality of crime in Fargo is anything but hilarious. However, it goes to show that crime isn't exclusive to big cities, and it can, unfortunately, happen anywhere in America.