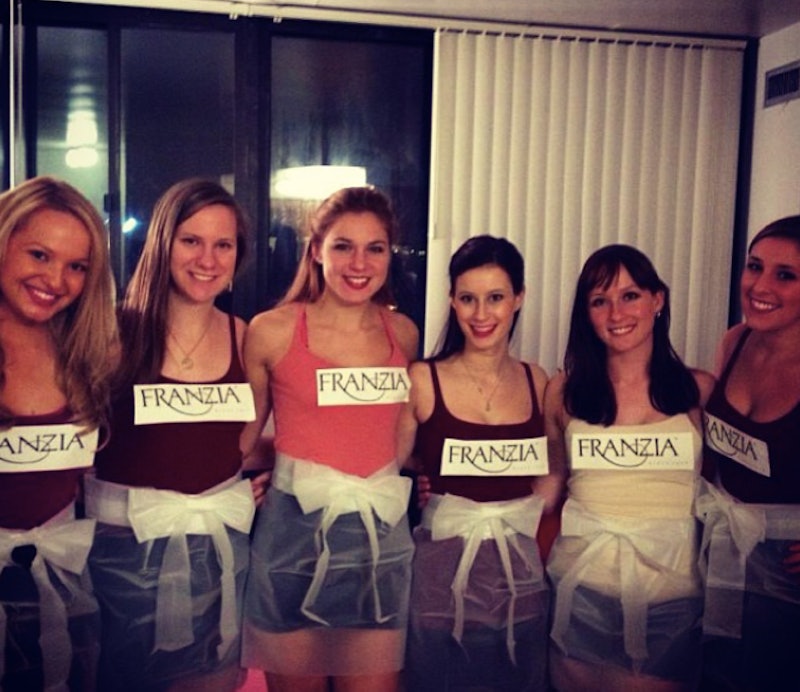 Let's face it, Halloween is kind of a pain in the butt. Not to be the October Grinch or anything, but it's a whole lot of hoopla for one holiday — nobody can blame you for wanting to decide on some cheap group Halloween costume ideas and calling it a night. The planning, the coordinating, the stressing over the costumes, the money spent, the mess made — all for a few hours in a dark room and one Insta that doesn't even show off the whole costume. And yet every year we subject ourselves to the chaos, mainly because it's impossible to avoid. Everyone is talking about it, all of the stores are advertising it, and despite the fact that you don't like the holiday, you've already taken a few "What Should I Be For Halloween?" quizzes and feel like there's no turning back now.

If you have plans, you won't want to feel left out and deal with people nagging you about your lack of spirit, so you'll have to pull something together. At least that way you won't have to come up with excuses or feel left out. And who knows, you might have a few drinks and decide you love Halloween. Weirder things have happened after a few drinks.

So if you're like me and you don't feel like digging through the lame remaining costumes at your local Halloween depot, and you have no idea what to do with the neon stockings, fake blood and fake eyelashes staring at your in the checkout line, here are a few costumes that are cheap and easy for you and your lazy squad!

Revenge Of The Nerds

The Cast Of Recess

You'll need: Dirty clothes, a backwards hat, some soil on your knees and cheeks and a messy hair-do.

You'll need: This is really a "dig through your closet" kind of costume. It will be more about the props. But, don't be this guy who wore a fat suit and called it gluttony — not cool, dude. Just walk around with an extra-large pizza, it's a win/win.

The Early Stages Of Miley Cyrus

You'll need: Miley was just the girl next door with a pair of cowboy boots in the early days. Jeans, a flannel, some boots and braids should do it.

The "Shake It Off" Video Outfits

You'll need: This might involve some potluck sourcing. Between you and all your friends you'll be able to fish out some video looks.

You'll need: Go to the fridge, take out an egg, boil it for safety, take it to the party and gyrate with it. Humpty dumpty, boom.

You'll need: Sexy vibes. Get your contour on. Show off your curves. Maybe over-line your lips if you're worried no one will know who you are.

You Are What You Drink

You'll need: Cut the label off an empty box of wine, pin it to your shirt. BAM!