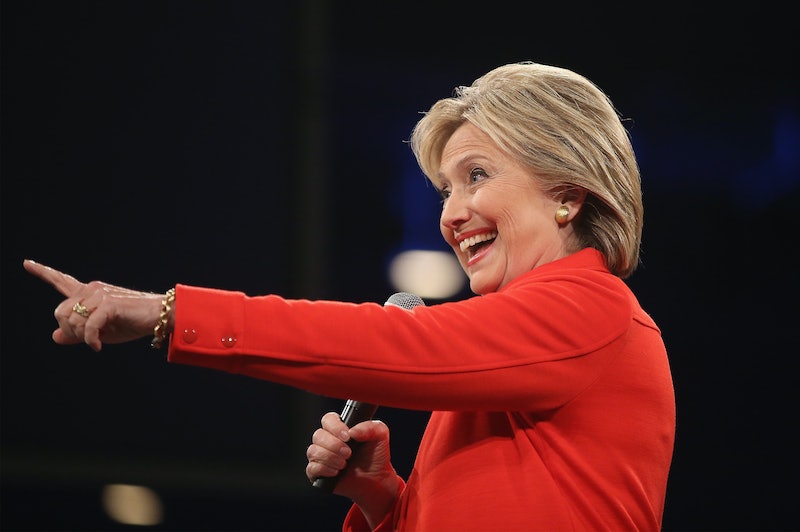 Hillary Clinton turns 68 on Monday, and she'll no doubt celebrate in style. Her Twitter was magically outfitted with rising balloons, and tons of Clinton fans tweeted birthday wishes to the presidential candidate. Her husband tweeted, "They say it's your birthday... Happy Birthday to you, dear @HillaryClinton! #HBDHRC," as if he wasn't aware of the special date. Her birthday wish list was short, though — all she wanted was for supporters to sign her online birthday card and donate to her campaign. Money is always a welcome gift, but actual presents you can unwrap and keep forever hold a lot more significance. Which is why there are some feminist birthday presents I would give Hillary Clinton if I were so lucky as to celebrate her special day with her.

If anyone would appreciate a feminist-themed present, it would be Clinton. I mean, the woman has fought for gender equality her entire political career. It will be difficult to out-do Katy Perry's gift to HRC, a gold necklace that says "POTUS" — Clinton's probably already secretly wearing it under her birthday pantsuit — but there are lots of feminist objects out there that could inspire, encourage, and just put on smile on the presidential hopeful's face.

Here are 10 feminist gifts for Clinton's 68th birthday, because one can never have too many gender-equality-themed items lying around.

"Queen Of Everything" Mug

This is the perfect coffee mug to help Clinton start every day with a boost of confidence.

"She Needed A Hero" Poster

I can't say for sure whether or not this is Clinton's life motto, but this poster definitely sums up her attempt to be the first female president.

This pin adds some feminist flare to Clinton's "I'm a progressive who likes to get things done" quote from the first Democratic debate.

"A Girl Should Be Two Things" Bag

A bag with a message is the best way to organize your travel essentials, and Clinton's been traveling a lot on the campaign trail.

This T-shirt would go nicely with her new "POTUS" necklace.

Another gift that would compliment her "POTUS" necklace perfectly, this necklace would make Clinton's accessories read "Feminist POTUS," which is exactly what she'd be.

I know Clinton's not much a T-shirt wearer, but I think she would still enjoy this shirt's message about feminist rants (a.k.a. any time a woman talks about gender equality).

Whether she framed it or made it into a pillow, this cross stitch would constantly remind Clinton of her belief that women's rights are human rights.

"We Should All Be Feminists" Poster

A "We Should All Be Feminists" poster would instantly make any wall a statement on gender equality.

I image Clinton's office as a very elegant and classy work space, but this "girl power" banner would look great directly behind her desk, and she could bring it with her if she moves into the Oval Office.