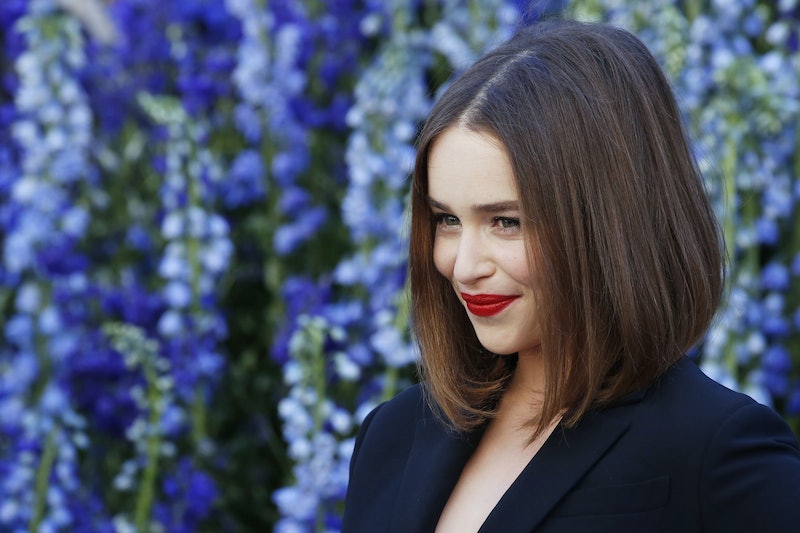 Since bursting onto the scene alongside Game of Thrones back in 2011, Emilia Clarke has always managed to stun on the red carpet. Emilia Clarke's best fashion moments have come in the form of high fashion Dior and elegantly minimal Donna Karan — over the years, she's dazzled countless times, leaving us fashion gals with a lot of chicness to review.

After all, Clarke has had quite the year — she literally rode off on a dragon at the end of Game of Thrones Season 5, she filmed Me Before You alongside Sam Claflin all summer, she traveled the world promoting Terminator Genysis — and last but not least, she definitively won an eyebrow off against Jake Gyllenhaal and Cara Delevingne (which is no mean feat; that's some seriously stiff competition)... suffice it to say, she's been very busy, and very, very well-dressed.

Even in just the past few months, she's been to Paris Fashion Week (where she killed it alongside the likes of Rihanna), she picked up a Woman of the Year award from GQ — and each appearance has been superlatively fashionable. Let's take a look at some of her best ensembles from over the years.

1. In Dior At Paris Fashion Week

So simple and so, so gorgeous.

2. In Oscar de la Renta At The GQ Men Of The Year Awards

Very pretty, and somehow reminiscent of an '80s prom dress, in the best way possible.

3. In Ulyana Sergeenko At The Seoul Premiere of Terminator Genysis

4. In Rosie Assoulin At The Los Angeles Premiere of Terminator Genysis

Who knew childish cursive and doodles could be so sartorially pleasing?

Very elegant (and Queen of Mereen-approved).

8. In Donna Karan At The Season 4 Premiere of Game of Thrones

9. At The Vanity Fair Oscars Party

Who knew nude sparkles could be this elegant?

Now that is a red dress.

It doesn't get much better than baubled Dior.

(Though tie dye-esque Chanel is definitely a close second).

Do I want to own everything she's ever worn? The answer is yes.