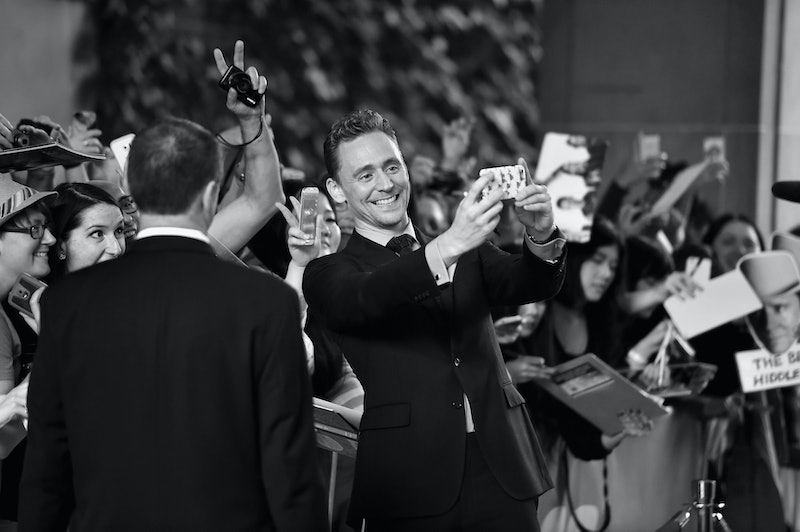 With his predilection for three-piece suits and his perfectly coiffed bed-head, the sight of Tom Hiddleston wearing so much as a t-shirt sends social media followers into paroxysms. He does appear at home among the debonair, and he's got the pedigree to back it up: He graduated with a Double First (sort of the British version of the American "Cum Laude" system of honors) in Classics from the University of Cambridge. Hiddleston's roles also frequently reflect a stiff-upper-lip gallantry; he plays as many, if not more, noblemen and society men as he does laypeople. So believe me, ranking these eight Tom Hiddleston movies in order of posh-ness was no easy task.

Though it might seem like a silly concept, class distinctions in Hollywood roles has been a contended issue. Speaking to The Hollywood Reporter, James MacAvoy criticized the number of wealthy, well-educated British actors currently dominating the cinematic landscape. (MacAvoy himself paid his way through school by working at a bakery.) Prior to Cambridge, Hiddleston was educated at Eton (as were Eddie Redmayne and Dominic West), one of the more well-known private institutions in England.

And whether ranking member of the military or land-holding gentry, Hiddleston's roles tend to exhibit some unadulterated upper-class fantasies. Perhaps it's his pallid complexion, his hooded gaze, or his self-deprecating smile, but there's something really posh, and a little bit mysterious, about him that he can't quite disguise. It's not just his Brit movies — his turn as F. Scott Fitzgerald in Midnight in Paris makes the cut too.

8. I Saw The Light — Hank Williams

Williams was born to a railroad engineer, and he and his family struggled through the Great Depression. While Williams ultimately went on to musical fame, his humble origins followed him for the rest of his life. Though he's the least posh character on the list, it's a role Hiddleston can sink his teeth into.

A rakish, daring Royal Air Force pilot embarks on an affair with the young wife of a British judge. Though class distinctions are on display — it's something of a hardship for Rachel Weisz's character to leave her life of comfort for the cramped quarters of her lover — Hiddleston's on the lower end in this movie.

As Adam, a vampire, Hiddleston has a kind of old-school charm about him, even though he portrays a grungy musician. Tilda Swinton plays his lover, Eve — and if playing vampirical representations of the Biblical couple isn't posh, I don't know what is.

There's admittedly a pretty big jump between seventh and sixth place on this list — in High-Rise, Hiddleston plays a young doctor who's swept up in an elite society that inhabits a high rise building. Adapted from the J.G. Ballard novel of the same name, High-Rise is also a reflexive meta-criticism of class distinctions. Luke Evans plays a documentary filmmaker determined to expose the cloistered societies within the residence.

A step up from the military service of The Deep Blue Sea, Hiddleston's character (spoiler!) doesn't last too long in War Horse. Still pretty posh.

Best known for The Great Gatsby, Fitzgerald's work remains a quintessential commentary on the opulence of high society in the 1920s. Hiddleston portrays a rose-tinted, nostalgic Fitzgerald accompanied by Alison Pill as Zelda in Woody Allen's Midnight in Paris, itself a commentary on how everything looks just that much more appealing in hindsight.

A member of the gentry, but a fallen one — Hiddleston plays the nobleman Sir Thomas Sharpe, who inhabits Allerdale Hall with his sister Lucille. What it lacks in upkeep, the mansion more than makes up for historical haunts.

Loki also appears, resplendent in cape and scepter, in Thor: Ragnarok, Thor: The Dark World, and The Avengers films. Once the usurper of the throne of Asgard, he's practically royalty. It doesn't get posh-er than that.

His thin lips and never-seen-the-sun complexion give him the aura of a Victorian gentleman; his expression can turn cold and calculating with the change of the wind, making him the ideal supervillain. Tom Hiddleston is one posh dude, and these eight roles are just the tip of an excellent career — portraying lords and their ilk.

More like this
Zawe Ashton & Tom Hiddleston Are Pregnant With Their First Child
By Bustle UK
'Elvis,' 'Walk The Line' & 10 Other Movies Where The Actors Actually Sing
By Radhika Menon
What’s New On Netflix: 'Stranger Things' & 'Mean Girls'
By Arya Roshanian
What’s New On Netflix: The Return Of 'The Umbrella Academy'
By Arya Roshanian
Get Even More From Bustle — Sign Up For The Newsletter