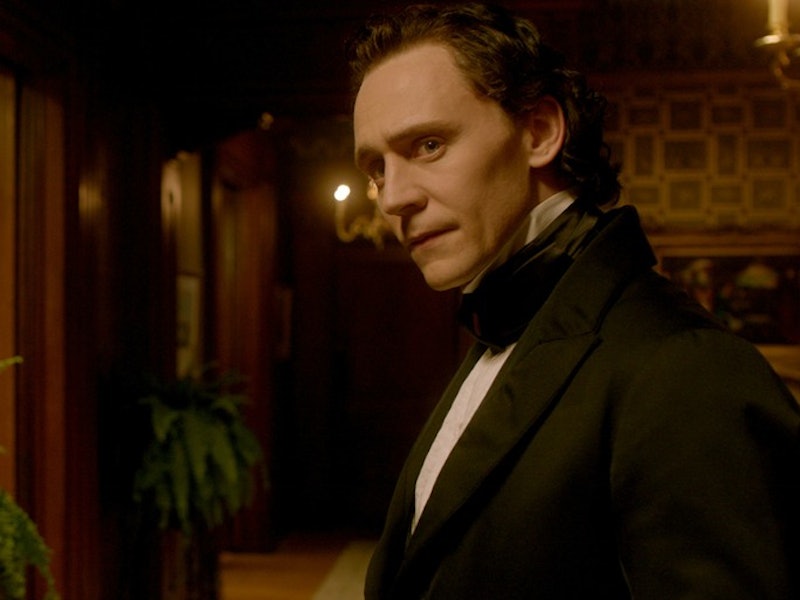 Crimson Peak has been out in theaters for less than seven days, and already it has proven itself to be one hell of a gift to Hiddlestoners everywhere. That's right, there are plenty of sexy Tom Hiddleston moments in Crimson Peak , and fans everywhere will be thrilled. Sure, the movie is a female-driven story all about Edith (Mia Wasikowska), but there's no denying that its leading man is one of the main attractions, too. It's hard to pinpoint exactly what the best Hiddleston scene in Crimson Peak truly is, as there are so very many to choose from. Is it when he, as the mysterious Brit Thomas Sharpe, shows up uninvited to Edith's home to take her to a dance? Or when he looks her dead in the eyes and asks, "Would you be mine?" Or is it when he disrobes on a cold, winter's night to have sex with his wife for the first time? So many choices!

If director Guillermo del Toro was hoping to make a film that would inspire countless Hiddlestoners to explode with lust, he just might have succeeded with Crimson Peak . After all, part of Hiddleston's wide appeal is how effortlessly he walks the line between good and bad — half English gentleman, half sexy bad boy — and his role in Crimson Peak shows this all too well. In case you haven't seen the film yet (or just want to relive it over and over again), here are some of the sexiest Hiddleston moments from Crimson Peak (in chronological order).

Thomas Sharpe walks into Edith's father's office like a boss, immediately catching Edith's eye. And can you blame her? Look at that top hat! And you thought Loki's horns were sexy...

"Would You Be Mine?"

When He Wears These Sunglasses

Because who else could possibly look hot in those?

Did it just get hot in here, or is it just me?

When He Gives Edith This Look...

Tom Hiddleston's look of love is better than yours.

And Then Makes Out With Her...

And Then Holds A Puppy

All while giving his sister the death glare for interrupting his sexytimes (and also probs for trying to kill his wife, but, you know, priorities.)

The Crimson Peak sex scene will go down in history as the sex scene that gave us Tom Hiddleston nudity. Praise del Toro.

At the end of Crimson Peak , Thomas (spoiler) realizes he has to save Edith, but he has to play evil to do it. What's a sexy man to do other than stab a good guy and then do a dramatic turn around for the audience?

There's a lot more sexy Tom Hiddleston in Crimson Peak than just the examples above, but I'm choosing to end here because well, it's a lot to handle.