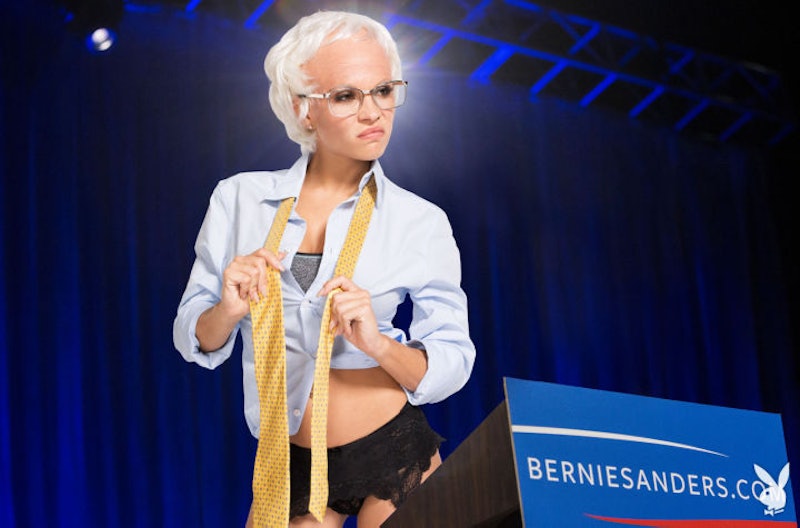 Of all the Halloween articles I've seen this year, I think we might have finally found our winner. In a walk-off victory, Playboy has compiled a list of 2015 sexy Halloween costumes that are totally topical. Regardless of your personal stance on the sexy costume subject, you’ve gotta admit — this list of sexy costumes that the legendary girly-magazine would want to see is refreshingly well informed, to say the least.

What Playboy is doing here is really sticking it to the camp that says that there is an inverse correlation between the amount of visible cleavage and the number of living brain cells resting above said cleavage, and it's pretty funny, if you appreciate satire.

It's time to, shall we say, reclaim sexy, and start a few conversations about topics like climate change, income inequality, and even collective bargaining rights. Here are some of my favorite costumes in the lineup.

Vladimir Putin is a waterfall of quotes that, if you're not paying attention, sound like they came straight from The Onion. Just last year he put forth an extended metaphor about nuclear Russia as a ferocious bear (and about how emasculating it would be if he weren't allowed to annex Crimea). The guy wrestles tigers and has a weird thing about the North Pole. I think this ode to his topless horseback riding escapades is the perfect way to kickstart a conversation about the Syrian refugee crisis and what all of the world's largest nations can do to help.

When the Pope came to visit the United States, he was met with unprecedented fanfare. The excitement surrounding the Pope's visit can be inextricably linked to his liberal and downright tolerant stances on things like divorce, gay marriage, and income inequality. No disrespect to Francis, of course, but he might wanna take this costume for a spin, since it's as modern and controversial as his beliefs.

Feel the Bern, am I right?! This jazzed up take on the Senator's usual wide-tied, bespectacled ensemble will launch you straight to the one percent, as far as best costumes go. Just make sure that if you see anybody dressed as a banker, you tell them exactly how you feel about their sub-prime lending practices.

If you want to start an impassioned speech from every football fan at your chosen Halloween party, by all means, go as sexy Roger Goodell. The commissioner of the NFL has been at the center of loads of embarrassing situations... but at least he was wearing pants.

To check out the entire gallery, head over to Playboy. And for more Halloween ideas, visit Bustle on YouTube.