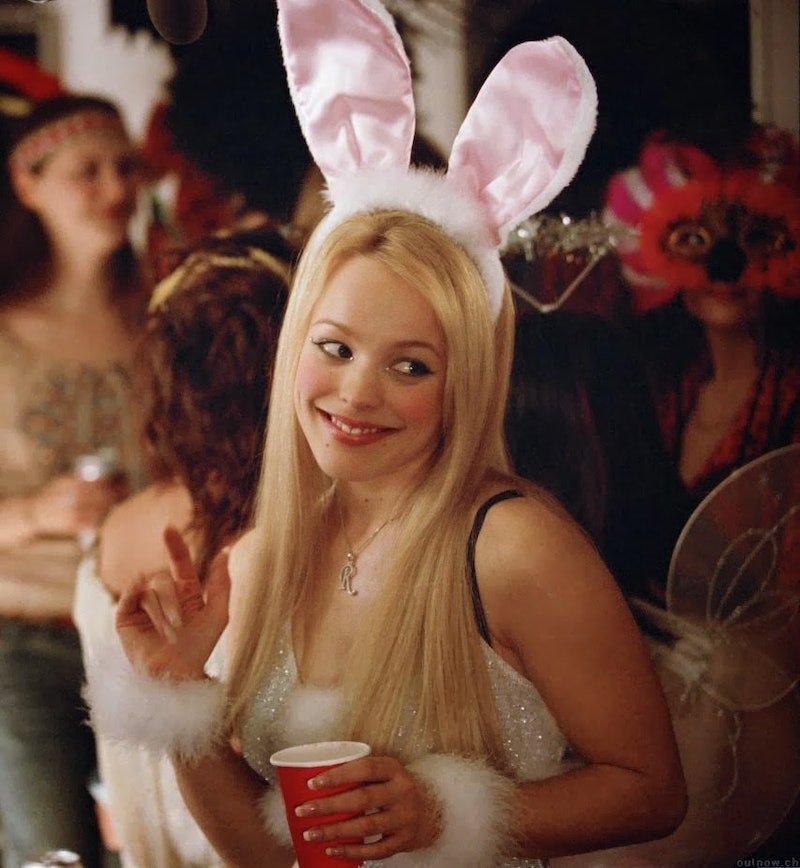 Halloween is almost upon us and it’s time to decide what costume to wear. To be honest, we don’t really have many choices in my opinion, and from my experience, women often opt for “sexy” outfits. Although in 2015, with feminism in the media spotlight, are sexy Halloween costumes still relevant?

When using the term "sexy" in describing a Halloween costume, I am referring to the kind of attire that I would argue many gals or feminine-presenting folk choose to wear on All Hallow's Eve. It's definitely nice to feel attractive at a Halloween party and, really, there aren't many options out there that cater to women who might want to look and feel good without flashing some flesh. As a result, some of us end up opting for the sexier threads, even if they're not what make us feel more comfortable.

The noughties were rife with women embracing sexy costumes in popular culture. There was Monica Geller of Friends who threw a Halloween party dressed as a slinky Catwoman, the Plastics of Mean Girls wore various animal ear headbands with almost irrelevant saucy outfits, and Elle Woods who dressed as a provocative bunny rabbit.

Through my teens and early twenties I have dressed up as many different characters for Halloween and other costume parties, but the running theme has been attempting to look "sexy."

My previous costumes have included: A bat girl of sorts, a bunny, Catwoman, a corpse bride, an evil angel, Alice in Wonderland, the white swan from Black Swan, Babydoll from Sucker Punch, and Harley Quinn from Suicide Squad . No matter the character, I always made the outfit risqué with either a skintight costume, a super short skirt, or some other area of skin showing.

It is worth mentioning that with a dance teacher for a mom, I grew up in the theatre and was constantly in and out of sparkly, showgirl costumes. The allure of putting on an act and pretending to be someone else for the evening was always a draw to me. This isn't because I don't like who I am or anything, but because it's just plain fun. However, if I am being totally honest with myself, I can't dismiss the idea that perhaps I enjoyed the attention I got from dressing in such a way. I also love the fact that I somehow managed to pull off making a slit throat look pleasant in my corpse bride costume because I paired it with a pretty dress, glittery eye makeup, and a tiara.

Now in 2015, after years of playing the provocative costume card, I want to try something new. However there aren’t a lot of options out there for women who want to look good and feel comfortable on Halloween, without choosing a saucy costume. Miranda Hobbes of SATC sums our choices up perfectly, “The only two choices for women; witch and sexy kitten.”

There are a selection of super scary costumes available, like Cady Heron’s terrifying zombie bride ensemble, and then the previously mentioned sultry styles (which often have a loose link to Halloween, if at all). However in the past few years, I have noticed a rise in nerdy Halloween costumes which often take inspiration from classic video game and anime characters or poke fun at popular culture. Although sadly, this is quite a niche market and not all women are avid gamers or manga readers.

I've become disenchanted with living up to the sexy Halloween costume stereotype and the pressures from society that would normally have me frantically wondering how to make a unicorn costume look hot. Is it too much to just want to look nice? Journalist Harriet Williamson asked similar questions in her article for The Independent entitled, "Why is there so much pressure on women to dress 'sexy' at Halloween?" Williamson rightly discussed that if women (or men) want to dress sexily, they should be able to do this any day of the year and not just at Halloween. She wrote:

"Who is giving women this weird permission on Halloween to demonstrate their sexuality? I’m not sure I want a bizarre cultural thumbs-up to get my upper thighs, midriff, and cleavage out, one night a year. I think I’d quite like the option of being whoever I want on Halloween (sexy or unsexy) and the ability to celebrate my sexuality, whenever the hell I like." – Harriet Williamson

I discussed my feelings on the topic with other young women who found themselves in a similar predicament to myself and I found that there is a lot of debate around sexy Halloween costumes. Beth, a student living in London, told me how she dislikes wearing sexy outfits at any time of year, not least at Halloween. She explained,

“Personally, I don't really wear 'sexy outfits' for any other reason than I often do not feel physically safe. If I am in a safe environment, perhaps with friends, I would have no trouble just being in a bikini or even naked, because I feel there should be no shame in expressing our bodies and sexualities through clothing. But, the sad truth for myself is that I often feel incredibly vulnerable and uneasy if I wear a short skirt or a tight top, primarily because I fear sexist comments (with, I assure, good reason.)” – Beth, 20

IMO Beth is very brave as she is taking a stand for her beliefs and putting her safety as her top priority – which is something everyone should do. All people, no matter their age, should feel they can dress the way they want to and not feel peer-pressured to dress in a specific manner just to follow the crowd.

Another woman I spoke to, a designer named Amy, highlighted the pressure women feel to compete with each other on Halloween. She commented,

“If it was a group of girls, say going into town, then I think the vast majority would end up going down the sexy route as it's a sort of subconscious competition to be the sexiest, fittest, and/or skinniest but I think there would be a few that would possibly go down the giant pumpkin, zombie, or hideous monster costume route who I'd say are probably more comfortable in their own skin and aren't too worried about looking potentially foolish.” – Amy, 26

However not all young women see Halloween as an occasion to flaunt their assets. Some women enjoy Halloween for the celebration that it is. Nyree, who works in retail, follows this line of thought;

“I went in town earlier to look for an outfit for Halloween and all I could find were 'sexy' outfits (short witch dresses, short nun dresses, nurses etc.) even the vampire ones were all short. I prefer my Halloween outfits to look Halloween-y, I'm out to enjoy the festivities of it all. Not to show everyone which pants I am wearing.” – Nyree, 24

However, there were a number of women within this group of twenty-something females who were all for Halloween costumes which celebrate female sexuality.

“I think if you have the confidence to wear them go for it. Everyone's different and I personally think they're fun. There's nothing wrong with a woman wanting to feel sexy as well as scary. You see more on a beach.” – Leonie, 26

Holly agreed, elaborating on when and where to wear these types of outfits;

“I think there's a time and a place, I agree that if you have the confidence go for it but just make sure they’re appropriate. I wouldn't go to a child's Halloween party for example in a sex kitten costume! But fair game on a night out!” – Holly

“If you feel confident and happy go for it! I personally wouldn't wear the more risqué costumes because I wouldn't feel comfortable.” – Charlotte, 27

The general consensus from this group of twenty-somethings was that women should not be afraid to wear sexy Halloween costumes and if they want to celebrate their sexuality then they should. However in a perfect world there would be no pressure on women to compete with each other and feel peer-pressured into wearing sexy Halloween outfits if they would actually much rather wear a comfortable, nerdy, or genuinely frightening costume. IMO there needs to be more costume choices out there for women, ones that don’t over-sexualize their bodies or look saucy for the sake of it.

Arguably one of the most important questions to ask ourselves and take away from this discussion is: Why have sexy Halloween costumes become the norm and should we continue wearing them? Beth concluded,

On reflection, I might not retire my foxy Halloween costumes just yet because one year I might feel in the mood to wear them again. However this year, I want to try something new; something which I feel comfortable, attractive, and safe in — not just something “sexy.”

Want more Halloween fun? Check out the video below, and be sure to subscribe to Bustle’s YouTube page for more inspo!