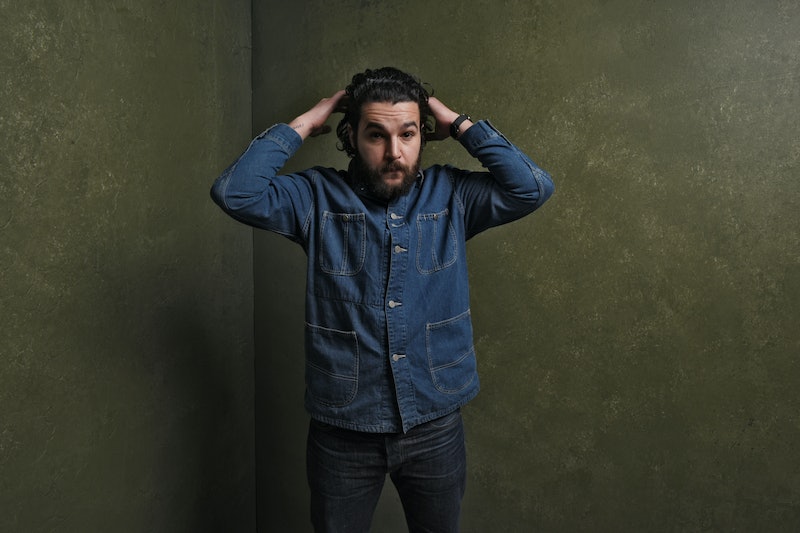 You probably know Christopher Abbott from his turn on HBO's Girls , playing clingy and sugary sweet Charlie, the boy Marnie let slip through her fingers. Or, you might not know him at all. He's been fairly under the radar since leaving the Lena Dunham-led show, only appearing in smaller indie films and moving past his arguably controversial departure from the hit series. But now Abbott, who is little like his docile HBO character in real life, is stepping into the role of leading man in Josh Mond's James White, which premiered at 2015's Sundance Film Festival. As we sit on a patio of the Four Seasons in Beverly Hills, Abbott is quiet, and a bit skittish. "Do you mind if I smoke?" he asks, before lighting a cigarette and leaning back in a lawn chair. Abbott may be very different than Charlie, but he seems to have quite a bit in common with this new character.

James White surrounds late twentysomething James White, who is trying to find himself while coping with the recent death of his father and caring for his now terminally ill mother. Abbott describes the film as a kind of coming-of-age story, but not the kind you can lump with films like Stand By Me or The Breakfast Club. White's development and growth as a person is less sweet, and his mistakes aren't as easily forgiven. "Sometimes you wanna say, 'Well, just get your shit together. You're an adult,'" Abbott says. "But I think the anxiety, or the hardships they're going through are a little bit more earned in a way, because it's not just because they are young and naive. It's a learned experience by now. It can give it that sink or swim feeling."

And most of us can relate. We're past adolescence, and while we are technically adults, there's a huge learning curve. Will we survive, figuratively and literally, the hardships that come after childhood, but even now, in our newfound adulthood, we are slowly realizing our mortality. A concept that crept into Abbott's consciousness even off set. "The film made me feel that [death] is more of a reality," he says. "Inherently, as I get older, I think about it more. I no longer feel as invincible as I used to," he admits. "It's scary. How do you even wrap your head around it? What it means... what happens after? You can't. You can't wrap your head around it. The film is a glimpse of what that's like, without giving any answers, because there are none."

Abbott's mother in the film, Gail, is played by fellow HBO-series star Cynthia Nixon, who appeared for six seasons as Miranda Hobbs on Sex and the City. While they didn't discuss their mutual HBO backgrounds, the two actors did bond over being fellow New York thespians. "I knew from the get go it would work with her," Abbott says. "I was a fan of hers, and as an acting partner she was extremely trustworthy. She would listen and give back. That's all acting is, give and take, and she was a spectacular partner in that way."

The scenes Abbott and Nixon enact are dire and difficult. They show a perhaps more truthful — at least, more visceral — version of death than we're used to seeing in mainstream cinema, and their scenes are often hard to stomach. "It can be scary to go to those places in film," Abbott admits. "But I wasn't afraid of getting too dark or too strange. I'm a fan of when I see things that are just weird, because people act strangely all the time — a character acting out of character," he says, adding: "It's a dream to be able to play a character that is multi-leveled and somewhat complicated. There's no right or wrong choice in that sense, anything goes," he says. "It's a beautiful thing I get to do. It does not go uncherished."

"A lot of people develop anxieties about death as you go through life, but the other side of it is, is that narcissistic? To worry about that? To think — not to get to dark about it — but to think, 'Poor me, I'm going to die one day.' In a healthy way it's a realization that at some point everyone is gonna deal with death, whether it's a loved one or — it's inevitable. The film brought all those thoughts to the surface. In a scary way, but in a healthy way."

Abbott smashes his cigarette butt into the ground, but holds on to the remnant to throw away inside. As our interview about life, death, and coming to terms with our collective and ultimate fate concludes, I look to the ashy, nicotine filled stub. A literal (and ironic) reminder of White — and Abbott's — own morality.

More like this
This 'Hunger Games' Alum Will Star In A New Medical Drama Titled 'A Mistake'
By Alyssa Lapid
One Powerful Quote In 'Doctor Strange 2' Is Going Viral On Twitter
By Alyssa Lapid
'Bridgerton' Star Nicola Coughlan Confirms Season 3 Will Focus On Colin & Penelope
By Grace Wehniainen and Alyssa Lapid
The Time Traveler’s Wife Book Has A Heartbreaking Ending
By K.W. Colyard
Get Even More From Bustle — Sign Up For The Newsletter